How to Say Hello and Goodbye in Dutch, Plus the 3 Kisses Posted by sarah on Mar 15, 2010 in Dutch Language

In Dutch there are many ways of saying hello and goodbye.  Which greeting you will use will depend on the time of day.  Most of the estimates for the times of day you can use these greetings are estimates, so use whatever seems most appropriate to you.  For the Dutch, the night greeting is usually reserved for very late at night.

goedemorgen : good morning, for use from around 6:00am until around noon

goedenavond : good evening, for use from around 5:00pm until around 11:00pm

In the above examples, goede is often slurred so that it sounds like goeie, which is also a bit more informal.  Try pronouncing goede but just gloss over the d in your pronunciation.

dag/daag : again it literally means day here, but it is used as saying, have a nice day.

doeg: this comes from dag, and just means the same thing.

doei-doei : this isn’t an official way of saying goodbye, but you will hear it a lot, and it basically means bye-bye

tot zo : see you soon, usually used if you will be seeing the person a little later that day

tot straks : see you soon, also usually used if you will be seeing the person a little later that day

One cultural difference you might notice is that the Dutch can be rather reserved.  For me, it’s fairly common that if I see a friend on the street I might yell my hello across the street and get this person’s attention.  This isn’t considered a terrible faux pas in Dutch culture, but it is often preferred if your greeting stays more subdued.

Those three kisses (Image by Simon Blackley at Flickr.com under CC BY-ND 2.0)

The other difference you might notice is that the Dutch give three kisses on the cheek when they greet.  A colleague of mine recently described it as a sort of head-bobbing chicken dance, and indeed, it can seem as such.  The general rule for these kisses is that women are expected to kiss women and men on each cheek, first one side, then the other, then back again to the first cheek, in a sort of quick pecking motion.  This is generally expected among friends and family.  Men are expected to give this greeting to women, but not with other men.  For men, a simple, firm handshake with a direct look in the eye will usually suffice.  Eye contact is fairly important for the Dutch, so even if it appears that they might be staring you down, it’s probably not intended that way.

There is a bit of debate over the whole “three kisses” vs “two kisses” within Dutch culture, since no one can really seem to find a good reason for that extra kiss other than that every one else does it.  Some Dutch people will even admit that three is perhaps a bit overkill, but as they say, when in Rome, do as the Romans do…and when in the Netherlands, give three kisses. 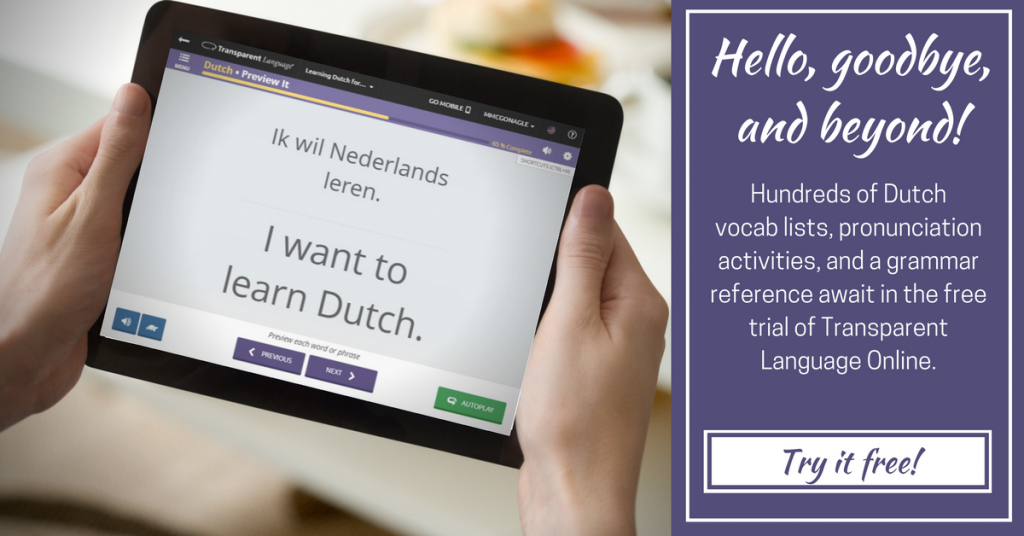 If you are looking to learn Dutch, check out our website at Transparent.com for free resources like Dutch Word of the Day and our Dutch Facebook community, or take it to the next level with a free trial of our self-guided online Dutch course.