I’m just making a goat and other stupid mistakes I’ve made in Dutch Posted by tiffany on Jun 5, 2013 in Dutch Grammar 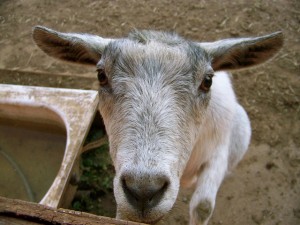 Every Monday morning, my husband gathers with his colleagues for their weekly office meeting.

And every Monday morning, just before the meeting officially begins, they have what I like to call the “Stupid things Tiffany said this week” briefing.

This is when my husband lists all the notable flub-ups I’ve made in Dutch since the last Monday meeting.

The first time my husband told me this, I was so embarrassed.

“No, no, don’t be embarrassed” my husband said. “They’re so impressed. They always go on about how good your Dutch is. Especially in the short time you’ve been here. They just think your mistakes are cute.”

Now, when something bizarre comes out of my mouth, we both simultaneously shout “That’s one for the morning meeting!”

Though, sadly, in the past 3 years, those Monday morning meetings have gotten to be pretty boring. My language skills are at the point where there’s hardly anything to report any more.

Here’s the thing… at some point during your language learning journey you are going to say something stupid. It’s inevitable. It comes with the territory. It’s also the only way you learn.

But that underlying fear of screwing up holds a lot of people back. If you’re one of those people, take heart. Whatever embarrassing mistake you make, I can guarantee you I’ve already made it.

Using het when the correct article is de? Guilty.

Referring to someone as je when I should have used the formal u? Guilty.

Guilty as charged. On all accounts.

But, really, those are just minor offenses.

Here are the real doozies:

What I wanted to say: I can’t stay awake.
What I should have said: Ik kan niet meer wakker blijven.
What came out of my mouth: Ik kan niet meer makker worden.
What’s so embarrassing about that? What I really said was “I can’t wake up again” or “I’m dead.”

What I wanted to say: That was delicious.
What I should have said: Het was lekker.
What came out of my mouth: Ik ben lekker.
What’s so embarrassing about that? Instead of telling my (then future) in-laws that the meal they served was delicious, I told them I was hot. As in sexy hot.

There are more. Many more. But I think I’ve embarrassed myself enough.

Now it’s your turn. What are some of the silly mistakes you’ve made while learning Dutch?