Koninginnedag (Queen’s Day) in Amsterdam Posted by sarah on May 1, 2010 in Dutch Language

This year for Koninginnedag I spent the day wandering around Amsterdam. Actually, I did this last year as well, since I live here, but I think the pictures from this year came out better.  So for those of you who might have missed it, here’s a little bit of Koninginnedag to brighten your day.

Our day started with walking along the Prinsengracht, where all the party boats meet. It’s one big party on the canal, but all those boats have to fight to get under the bridges.  Although the day started out a bit rainy and dreary, by mid-afternoon the sun was shining. 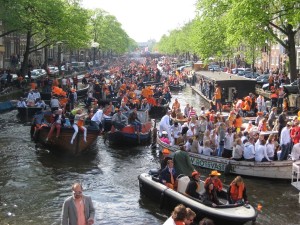 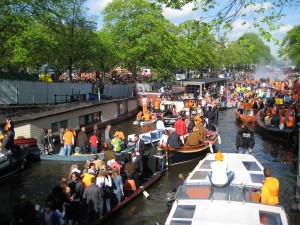 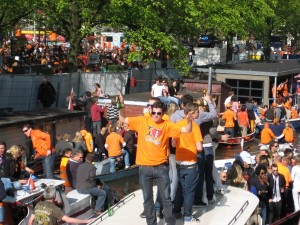 I ended up at Leidseplein at some point, where there was a massive crowd, tons of loud dance music, and hair gel. 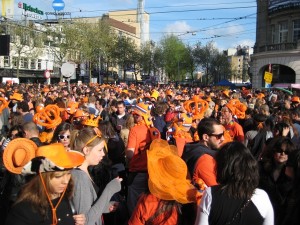 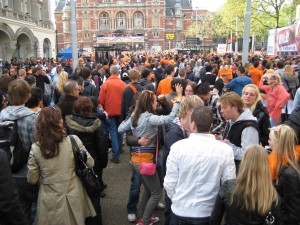 Vondelpark is reserved for the children selling things.  I think it’s one of my favorite places to be on Koninginnedag because it’s a little more laid-back.  I snapped a picture of a lady with a bakfiets full of puppies. 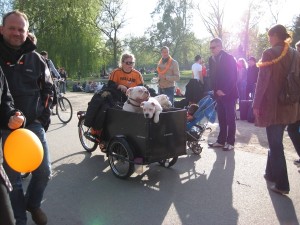 They had set up a large stage on the Museumplein, near the Rijksmuseum, where there were DJ’s…and lots of teenagers. 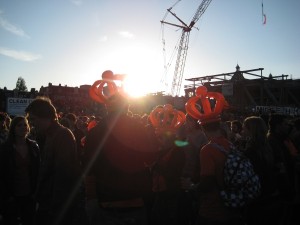 And no recounting of Koninginnedag would be complete if I didn’t at least mention the trash.  The garbage collection agencies have been going on strike throughout this year, and decided that the best day to make a really big point would be on Koninginnedag.  So all across the country, bar and club owners are incredibly mad because the trash from Koninginnenacht was then covered in trash from Koninginnedag, and currently the cities are…messy.  The strike is said to end on Monday, but until then we’re stuck with a bit of a mess.