Limburg is the southern most region of the Netherlands that borders with Germany and Belgium. It has slightly over one million people and ranks 6th in population size in the country. During the past three years that I’ve lived in Limburg, I’ve learned that it is a region set apart from the rest of the country, particularly from the Randstad area. There are a few reasons as to why this is the case, but one stands out for me: the language. 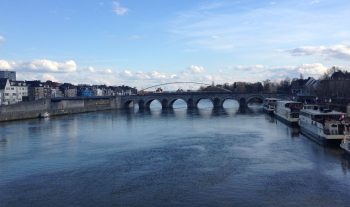 The most popular dialect is Mestreechs which is spoken in Maastricht or Mestreech. This dialect is a blend of the three language influences in the city: Dutch, French and German. Words are elongated a bit and it sounds like if people are singing rather than talking.

Kerkrade’s dialect is a blend of Dutch and German, and is called Kirchröadsj Plat. Sound-wise, it is more similar to German than it is to Dutch. The city of Herleen also has its own dialect and is also very similar to German. Roermond and Venlo also have their own versions of plat as well as many small towns throughout the region.

The diversity in dialects makes it very complicated to learn or even just understand, however, I have managed to make a few observations that would be helpful to anyone visiting the region:

Many words in Dutch that have ui are pronounced with oe instead. Some examples are boeten instead of buiten, thoes instead of thuis, and doem instead of duim.

Many words that have a  sch are pronounced with sj such as sjoon isntead of schoenen, boetsjappen instead of boodschappen, and sjtom instead of stom.

This is perhaps the handiest word to learn in plat. Enne is some sort of “hello, how are you?” type of word. When you see someone, you can just say enne and the conversation just starts.

These three observations are not a rule. There are many words that just have a completely different word in plat, and like I said before, there are variations in different cities and towns.

If you are interested in learning more about plat, I have a few suggestions of where you can learn: