Dutch is usually associated with the Dutch. That makes sense, not everybody knows that Dutch is also an official language of Suriname and Belgium. Is Dutch the same everywhere? No, each country has its own variety. Let’s have a closer look at the Dutch spoken in Belgium.

First, some terminology. Dutch is spoken in a part of Belgium called Vlaanderen (roughly the northern half, bordering the North Sea and the Netherlands). Therefore, the language spoken there is sometimes called Vlaams (Flemish). To complicate matters, it is also called Belgisch Nederlands (Belgian Dutch) and Zuid-Nederlands (Southern Dutch). Belgian, on the other hand, is not a language. It does not exist. There are only Belgian varieties of Dutch, French and German.

So what is Flemish? Because Flemish is not considered a language but a language variety, it is difficult to say exactly what it is and what it isn’t. When people use the term, they could be talking about the Dutch spoken in Flanders, tussentaal or the Flemish dialects. Tussentaal is not quite standard Dutch but not as localized as dialects either (Wikipedia describes it as the “supra-regional, semi-standardized colloquial form”). The examples of Flemish in this post are all standard Dutch in Belgium.

The biggest difference between Flemish and Dutch is the pronunciation. Although they can understand each other just fine, you may hear the Dutch say that Flemish just sounds softer. In addition, quite a few words have different meaning in Flanders, or they may use another word to refer to the same thing. Some examples:

When the Flemish say that something is schoon, they mean it is pretty or beautiful. In the Netherlands, something that is schoon is just clean.

In the Netherlands, you’ll get a portion of fries when you order patat. In Flanders, patat is a dialect word for potato. If you want to eat fries in Flanders, which you definitely should, ask for frietjes. 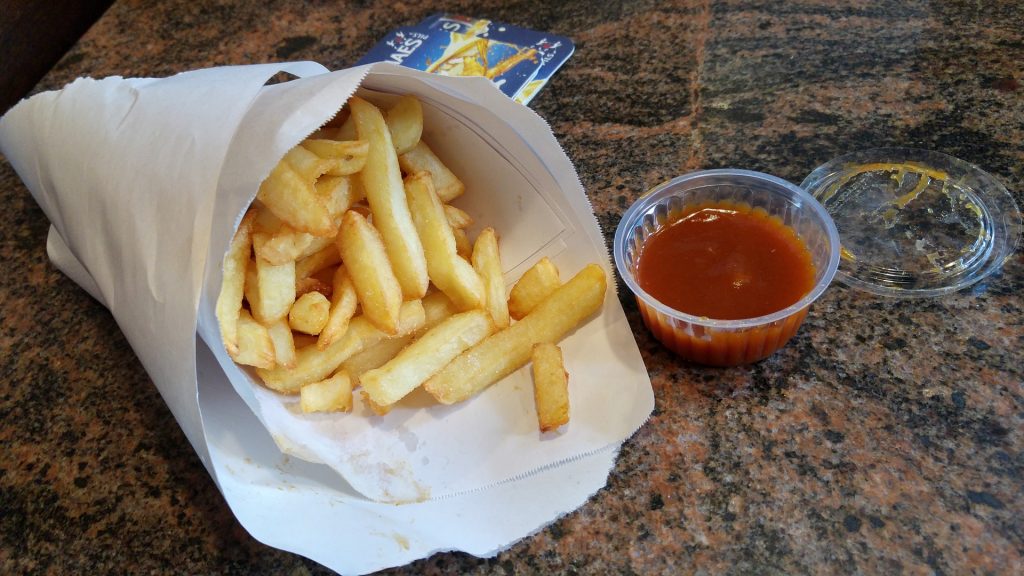 Don’t eat too many fries, or you won’t fit into your kleedje. In Flanders that is, where it means a short dress. In the Netherlands, a kleedje is an area rug.

Back to food. A Dutch person puts jam on his bread, a Flemish person eats confituur. Both mean- you got it- jam. Why do the Flemish need a longer word? Flemish has been in much closer contact with French and still uses more French words, like confiture. Another example of this tendency is the grilled cheese. Both countries serve it with ham, but in the Netherlands, it is called a tosti, whereas in Flanders, it’s called a croque monsieur. Just so you know, a croque madame is a grilled cheese with an egg on top.

As in English, bank has multiple means in Dutch. It can be a financial institution, but it can also refer to a bench. In the Netherlands, it can also be a sofa, but not in Flanders. The Flemish watch TV from their zetel.

Onto verbs. In the Netherlands, if you want to use your debit card, you ask the cashier if you can pinnen. In Flanders, they don’t pin. They simply say met de bankkaart betalen (to pay using your “bank card”).

This list is far from exhaustive. In a recent Prisma dictionary edition, around 3,500 words were marked “Flemish Dutch” and 4,500 words “Netherlands Dutch”. What are some of the differences that you’ve noticed?

About the Guest Author: Jessica is a linguist, a communicator and intern at bab.la. She loves language, nail polish and her sisters. She is on a mission to make government and administration more accessible by simplifying their language.