Sinterklaas is back! 3 Things You Gotta Know Posted by Sten on Nov 14, 2016 in Culture, Dutch Vocabulary

Sinterklaas is weer in het land! On December 5, Sinterklaas brings them presents with his pieten. He arrives around a month before the feest (celebration), actually. Who? What? Why? Just read on – all you need to know about Sinterklaas right here!

Sinterklaas is in many ways like Santa Claus, or Saint Nicholas. Here a few similarities:

They are basically the same person! If you look at their origin, that makes sense. They are both based on the same historical figure Nikolaos of Myra.

A few things that make Sinterklaas unique and easily recognizable are his mijter (miter), his staf (staff), and – very important – het grote boek (the big book). In that boek, it says whether children have been stout (naughty) or zoet (nice). In a Sinterklaas song, it becomes clear what consequences this has: wie zoet is krijgs lekkers, wie stout is de roe (who’s nice gets sweets, who’s naughty gets the cane). Brutal, yes, and no, that does not happen anymore. ALL children are sweet of course, and get presents!

Another thing that distinguishes Sinterklaas is his Schimmel (grey horse), named Amerigo. He rides the roofs with it to bring the presents!

Sinterklaas on his horse Amerigo (Image by Pieter Wiersinga at Commons.wikimedia.org under license CC BY SA 4.0)

Furthermore, Sinterklaas doesn’t have elves as helpers, but pieten! 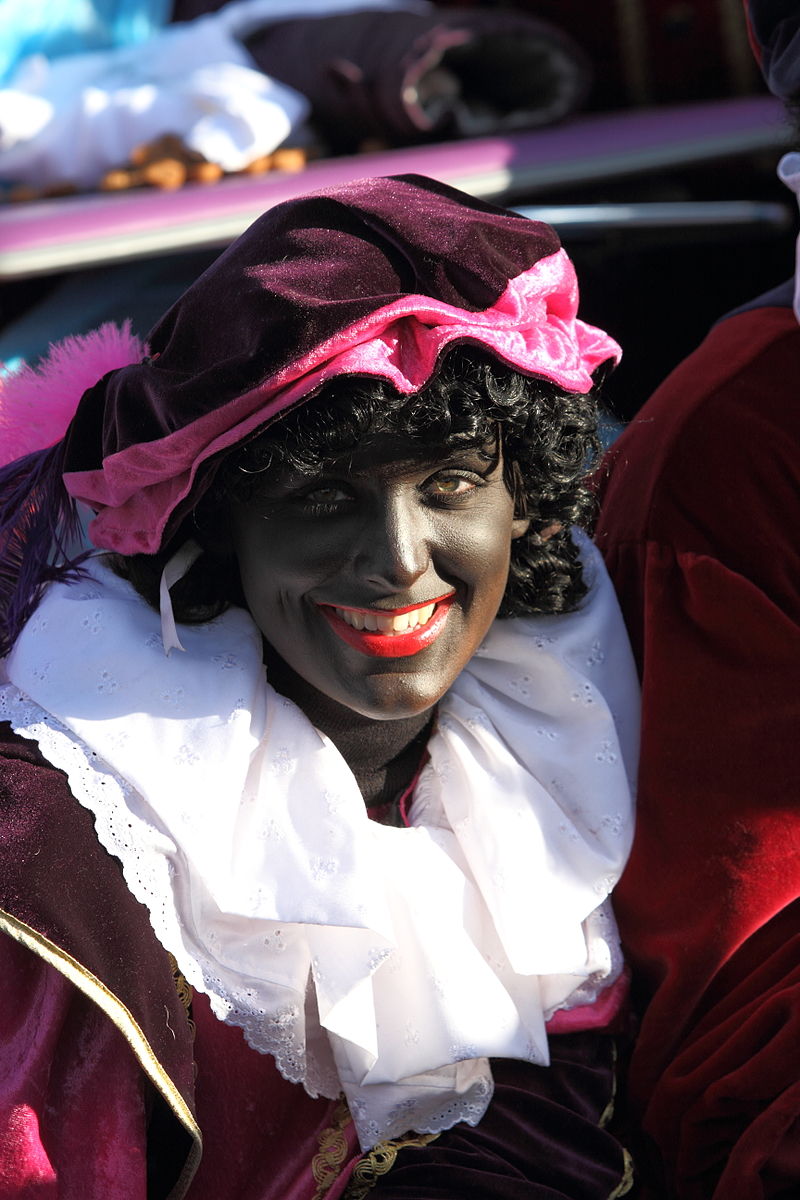 A zwarte piet (Image by Sander van der Wel at Commons.wikimedia.org under license CC BY SA 2.0)

Sinterklaas has his helpers, the pieten. There are many different kinds of them, and they all have their role. Much like the Smurfs, really! There is DJ-piet, who is a DJ, obviously, vergeet-piet, the piet that forgets everything… You get the point 🙂

There has been a very long discussion whether pieten are a racist phenomenon. In the United States, white people painting their faces black and their lips red would cause upheaval, but it is a normal part of the tradition, and so many people see any change in it a big problem. The compromise that was found last year were different kinds of pieten, for example stroopwafelpiet. This year – and I personally think it makes more sense – the compromise is to have pieten that are either “normal”, completely white pieten and pieten with roetvegen (soot smudges).

This makes sense, because pieten are black because they go into the chimneys to deliver the presents, so it makes sense that they have roetvegen on their faces. It is an endless discussion though, it seems, because many people still don’t think this is acceptable. In both camps.

Regardless, they are very popular and very much a part of Sinterklaas!

In the story, Sinterklaas is from Spain and arrives in the Netherlands on his pakjesboot (presents boat), together with his pieten in the beginning of November. This was on Saturday, the 12th of November. Every year, the intocht (entry) is held in a different city. This year, it was in Maassluis. See the whole thing in the video above. That is the Sinterklaasjournaal (Sinterklaas News), by the way, which is ongoing for a few weeks before December 5. It is made specially for children, with all the fun of songs, issues with the pakjesboot or the pieten make a mess… Or Amerigo is ziek (sick)… Of course, in the end, everything works out!

So, Sinterklaas is back in the country! Do you celebrate Sinterklaas, Christmas with Santa, or something like it? What do you think about the whole discussion about the pieten? Let me know in the comments below!