Friday, June 21, 2019, 5:30 pm. Maarten van der Weijden jumps into water in Leeuwarden. With a steady borstcrawl (front crawl), he makes it in the evening to Sneek, the first stop of the eleven cities he is going to get to. Wait, eleven cities? What was this guy up to? Let’s find out.

The Dutch cherish their beloved Elfstedentocht. It is an historic schaatstocht (ice skating tour) that started in 1909. Running almost 200 kilometers (124 miles) over sloten (creeks), rivieren (rivers), meren (lakes) and kanalen (channels) through elf (eleven) steden (cities) in the province of Friesland, it has turned into a real pride for the Friezen (Frisians). However, the Elfstedentocht is difficult to organise. The ice needs to be thick enough along the entire route. And because there are hundreds of participants, it needs to be quite thick – at least 15 centimeters (6 inches)!

At each of the elf steden, the schaatsers (ice skaters) receive a stempel (stamp) as evidence that they skated past this stad (city).

Unfortunately, temperatures have risen in recent decades, and that required thickness has not been reached since 1997. But every winter, when freezing temperatures are forecast, the Dutch cross their fingers. 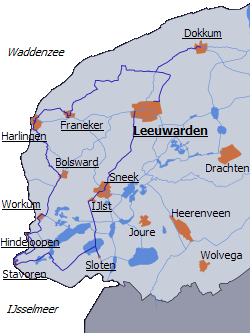 The route along the elf steden followed by Maarten van der Weijden (Image by Torsade De Pointes at Commons.wikimedia.org under license CC BY SA 3.0)

Back to Maarten van der Weijden. He is… swimming this? Finishing these 200 kilometers in other ways than schaatsen is nothing new – check the spinoffs below for more on that. But the way he got through this Elfstedenzwemtocht (Eleven Cities Swimming Tour) is rather indrukwekkend (impressive). He finished on Monday, shortly after 7:30 pm. Swimming 70 hours with only a few short breaks and nights of 3 hours of sleep is an achievement that has not been done like this before. The former Olympic swimmer is doing pioneer’s work here.

Van der Weijden swam this insane tour to collect money for kankeronderzoek (cancer research). He had leukemia himself when he was a young adult, after already having been a successful swimmer. He then made it his mission to prove that even after that, he could still be a topsporter (top sportsman). In 2008, Maarten proved this by winning the gold medal at the Olympische Spelen in Peking for the 10k open water.

However, this did not stop his ambition to fight kanker (cancer). And so in 2018, he tried the first Elfstedenzwemtocht. However, the attempt failed after about 165 kilometers, because he did not get enough rest. He now rested more, and a bit longer every night. He felt much better this year. It was a more plezierige ervaring (enjoyable experience) than last year, he said.

Is he going to do it again? “Ik denk dat dit het wel was” (I think that this was it), he says in the interview above. However, it looks like somebody else is going to attempt it next year.

But last year and this year, the Maarten van de Weijden Foundation collected money for 11 projects to fight kanker. This goes into the millions – last year it was 5 million euros. That amount may be surpassed this year!

Do you want to contribute? You can still donate now at this link! 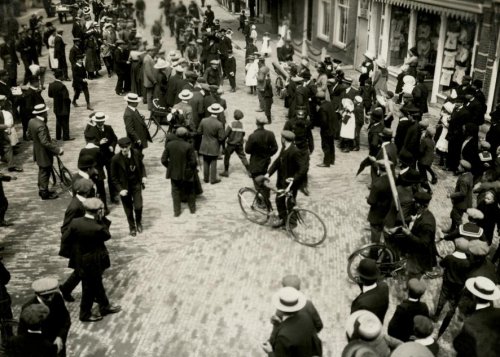 The first Fietselfstedentocht in 1912 (Image by Geheugen van Nederland at Commons.wikimedia.org under license CC BY SA 3.0)

What do you think of the Elfstedentocht? Have you, or would you like to participate in it, or in one of its spinoffs? Let me know in the comments below!