Summer seems like the perfect time to listen to music in Dutch and practice the language on your way to your summer holiday. In this post, I would like to recommend the Dutch rapper Ali B. 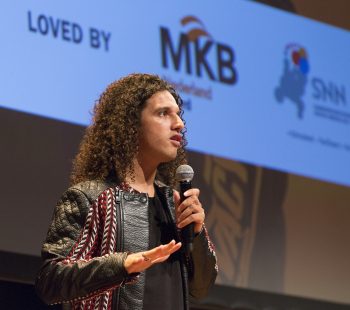 Photo taken by Congres in Beeld found on Flickr.com with license CC BY-ND 2.0

Ali B is a Dutch rapper of Moroccan descent who has taken the music scene by storm. He isn’t only popular as a singer but also a cabaretier or stand-up comedian, actor and judge and coach for the famous Dutch TV show “The Voice of Holland.”

Ali B’s journey as a singer began young, and one of his first accomplishments related to music was in 2000 and 2001 when he won a poetry slam in Almere. In 2002, he was the runner-up for the show Grote Prijs van Nederland under rap/hip-hop category. After the show, he was offered a contract with Warner Musi, and shortly after he released his first single Waar Gaat Dit Heen? or Where is this going?

In the lyrics, you can spot three different ways to express “where is this going to?”

In 2004, Ali B collaborated with the Dutch famous singer Marco Borsato with the song Wat Zou Je Doen and they presented this at a concert in de Kuip. What makes me like this song is the cultural representation of both singers. Despite their different musical genres, they came up with this great song that mixes the best of both talents and genres.

If you watch TV in the Netherlands, you will see Ali B everywhere. He has been featured in several shows, he comes out in commercials and he is, as I mentioned before, one of the judges for The Voice of Holland. He is quite a charismatic person, and, in my opinion, has become a type of poster boy in the Netherlands. This does not mean that his fame and his background haven’t come with controversies and opposition (which famous person can say that?). He simply seems to be a hard working person who enjoys what he does and is pulling in young talent to the Dutch music industry.

I leave you with my favorite video from Ali B. The song is titled Leipe Mocro Flavour which means dangerous/awesome Morroquian flavor. I think the video is super funny, and I am still wondering why a snapshot of Mexico City appears in minute 1:52. Does anyone know?

What do you think of Ali B and his music? Do you have any other recommendations of music in Dutch?