Strong Winds Cause Chaos in the Netherlands Posted by Karoly Molina on Jan 18, 2018 in News

In the Netherlands, we woke up to some of the strongest winds in years. The majority of the country was in code oranje and code rood for wind gusts of up to 143 kph. The hardest hit areas were in the Randstad, Gelderland and the north of the country. 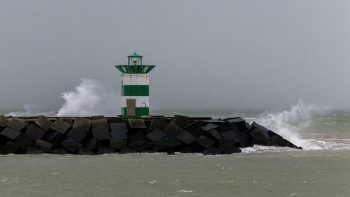 The zware storm caused lots of damage or schade in buildings and roads. There are videos of roofs being pulled out by the wind and trees falling on top of cars and in some of the highways. So far, there are tenminste 3 deaths because of the storm.

The winds raasde or raged the country and many trucks tilted over or kantelden on the highway. On Wednesday evening the NS had already announced that there would be limited trains traveling the country and some people ended up stranded looking for a ride home. You can read more about the problems the storm caused in this article.

Schiphol was also affected by the winds. The roof of the terminal was damaged and all vliegverkeer or air traffic was landed to avoid any accidents. While the winds calmed down in the midday, there were still plenty of delays throughout the day.

The following article from the Volkskrant has a very decent report on the major damages around the country. You can click here to read more.

The schade or damage is expected to reach 10 million euros.

The following video gives a summary of the most shocking footage of today’s storm.

Were you affected by today’s storm?