The Perks of Pets in the Netherlands Posted by Karoly Molina on Jul 15, 2015 in Dutch Vocabulary, News

Since I moved to the Netherlands, I have enjoyed the freedom pet owners have to take their loving furry friends to stores and restaurants. Other than the grocery store, dogs accompany their owners to the market and the terraces, enjoying the sunny days and people-watching. Everyday dozens of people walk by my home with a dog in hand…I’ve even seen some people walk their horses! It seems that animals are really part of the family here in the Netherlands!

Because of the heatwave two weeks ago, animal-safety was also a concern. The hitteplan I recently wrote about also includes provisions for animal safety with the soaring temperatures. People were advised to provide enough water and shade for their animals and to be on the lookout for any signs of dehydration. 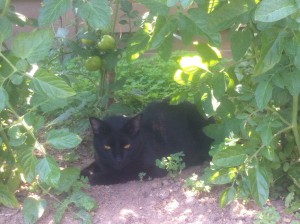 Our cat Mona enjoying the shade of our tomato plants during the heatwave (personal photograph).

So what do you do if your pet has a medical emergency?

Well, in the Netherlands you can dial 144 which is the number that connects you to the dierenpolitie which is part of the regular police force. The dierenpolitie is in charge of maintaining the safety of all animals in the Netherlands from people who might want to harm them. This includes neglect, abuse, killing, poaching and animal pornography among others. When you call 144, the centralist or the operator will send to your address the appropriate response team, whether that be the police or an animal ambulance. The police isn’t only available for pets, but also for farm and wild animals. The following video explains what the dierenpolitie does.

During the last heatwave, the dierenpolitie received more calls than usual, most of them related to animals in danger because of the scorching heat. All I can say is I am glad that not only is the safety of animals important in the Netherlands, but that a special police task force is available to help.

Do you have an animal-police force in your country?