Every year again in December, it is time for the Top 2000. If you’re Dutch, that should ring a bell! For days on end, the best nummers (tracks) are played on NPO Radio 2. And millions of people tune in to this lijst der lijsten (list of the lists) every year. 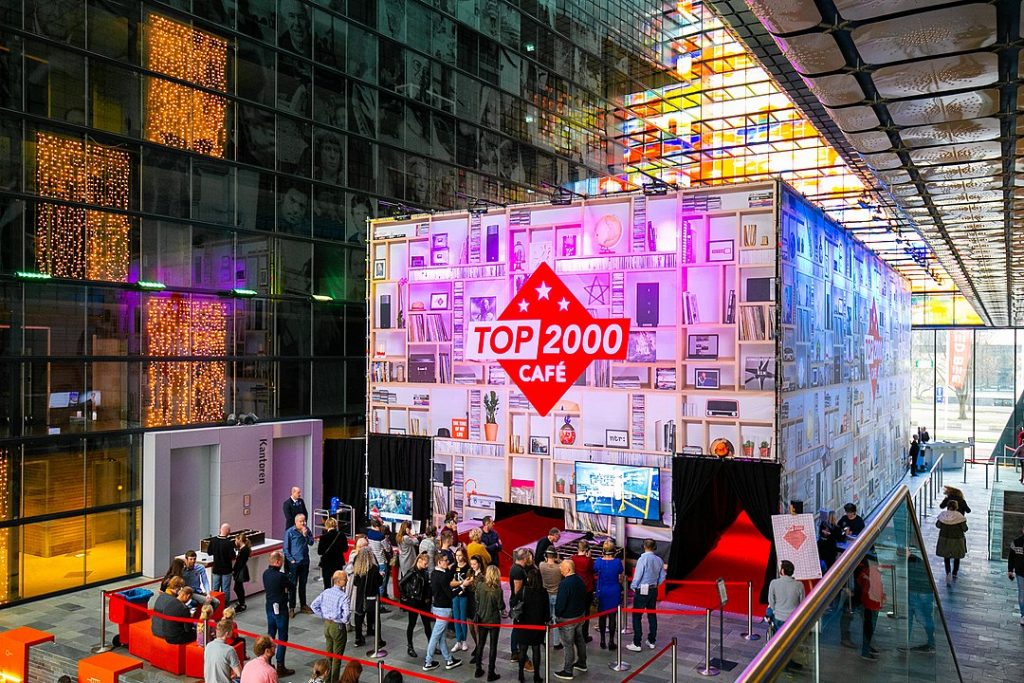 The Top 2000 Café, built specifically for this radio program. It is featured since 2010, and is open for free to the public. However, due to its small size, only a limited number of people can be inside at any given time. Inside, the Top 2000 is played (Image by Laurensvanheerde at Commons.wikimedia.org under license CC BY SA 4.0).

The first week of December constitutes the stemweek (voting week), in which people are able to vote online on their Top 2000 songs – ever. In the last week of the year, starting eerste kerstdag (First Christmas Day), December 25, the radiostation (radio station) NPO Radio 2 plays all 2000, without interruption but for some ads and an hourly news cycle, up to the very last seconds of the year on oudejaarsavond (“old year’s evening” – New Year’s Eve)!

In 1999, Radio 2 did this for the first time, and it was a massive success. They then decided to repeat it jaarlijks (annually). While voting back then was still done on paper lists in physical locations throughout the country, it is possible these days to vote online. This allowed the possibility to even put liedjes (songs) on the list that weren’t there before, allowing many new entries.

But if you expected that this would lead to a lot of new liedjes leading the Top, you would be surprised. Many classics have routinely topped the charts, with Queen hit Bohemian Rhapsody reaching number 1 in 2019. It is almost becoming a tradition that this song wins, being that this was the 17th(!) time on number 1 out of the 21 editions of the list. The Eagles are also consistently close seconds with their ‘Hotel California’. Other evergreen bands like U2, Red Hot Chili Peppers, The Beatles or Coldplay are also always far up in the charts with many of their nummers.

But also Dutch artiesten (artists) are doing very well. Guus Meeuwis or Boudewijn de Groot, but also somebody like Danny Vera got fourth place on the list with his song ‘Roller Coaster’, a complete surprise as he was a newcomer to the list.

What do you think of this crazy Dutch tradition? Is there something similar in your country? Let me know in the comments below!