That the Dutch love their bikes is no news. The country is full of bikes – but also bike lanes. The video below nicely shows how the Dutch got the network of bike lanes that they have now. The Dutch continuously strive to make the system faster, more efficient and easier to use, so that more people use bikes instead of cars. And that is important, because the number of traffic jams is continuously rising. Recently, there have been new developments on this front, for example the fietsrotondes (bike roundabouts). And now, there are fietssnelwegen (bike highways)…

Nice. I think our #fietsrotonde and #voorrangspleinen are a good option to look at 🙂 Good #fiets luck! pic.twitter.com/ilYBQBuZGd 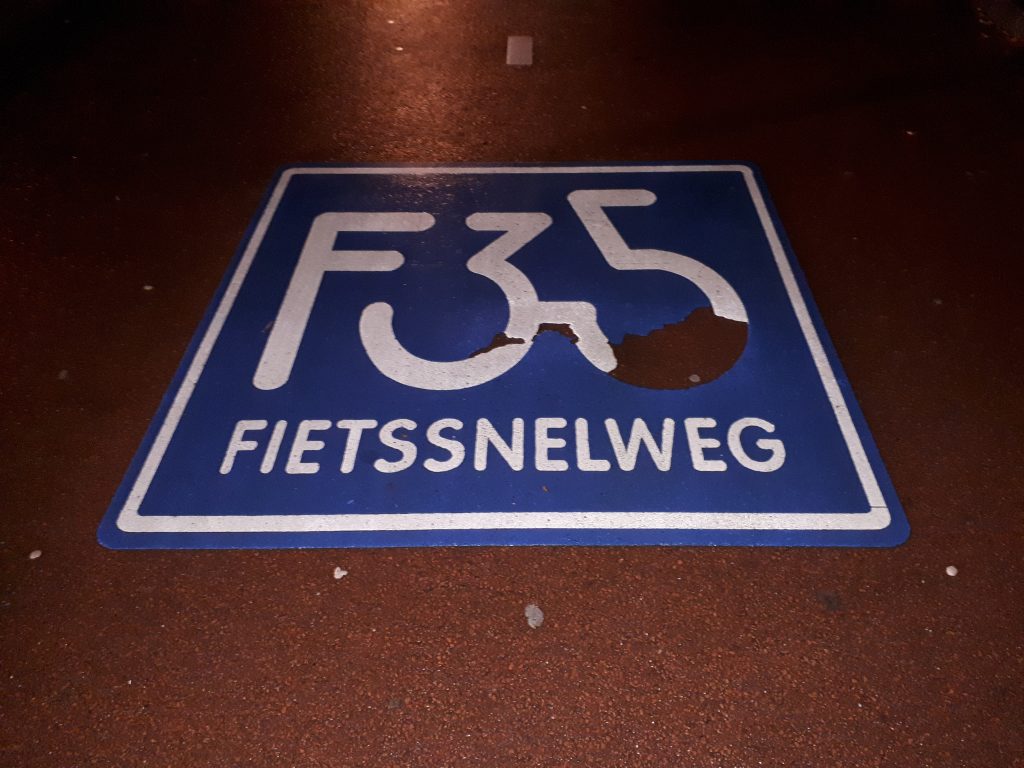 Marking of fietssnelweg F35 in Almelo (Image by author)

A fietssnelweg (also called snelfietsroute (fast cycling route) or fietsostrade (bike street in Flemish)) is a bike lane that is intended to make travel by bike as snappy as possible. You may think: You can only cycle a certain speed, how is a bike lane going to change that?

While a fietssnelweg does not have a specific definition, there are some common specifications that give an indication. These are the afwezigheid van gelijkvloerse kruisingen met gemotoriseerd verkeer (absence of same-level junctions with motorized traffic), a beter wegdek (better pavement) and the afwezigheid van verkeerslichten (absence of traffic lights). And if there is a junction, bikes are prioritized and cars have to give way. This all makes sense: less waiting means getting to your destination speedier. Fietsnelwegen often run next to train tracks or streets, and connect hubs and important spots, such as train stations and city centers.

In Twente, a prominent example of a fietssnelweg was realized: the F35. It got its name from A35, the snelweg (highway) that it runs next to. With 62 kilometers (38.5 miles), it is quite extensive. Twente is a part of the Netherlands where a lot of people use their bike, and this fietssnelweg is supposed to bring even more people to use their bikes and leave the car at home. And that makes sense, too, because there is a prominent fileprobleem (traffic jam problem) in the Netherlands. Files (traffic jams) get longer every year. So maybe, fietssnelwegen are the solution!

What do you think? Would a fietssnelweg be a reason for you to abandon the car and use a bike? Let me know in the comments below!