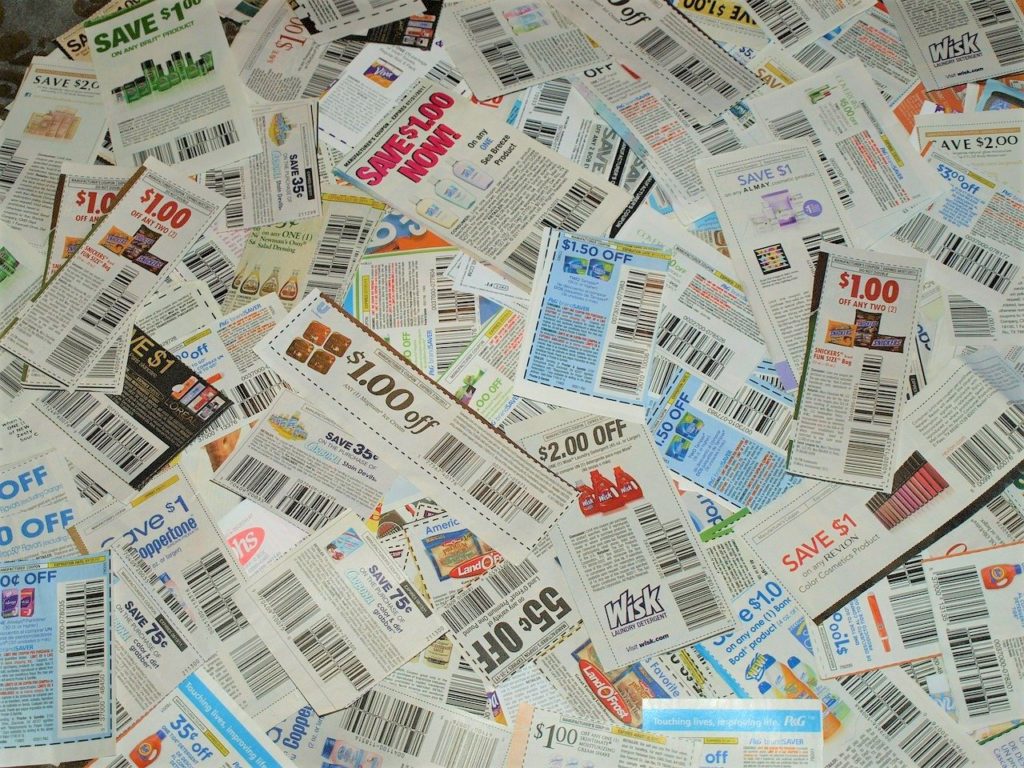 Image by bertie watson from Pixabay

Few things are as American as the coupon. They are a marketing tool used to promote a product by offering discount savings, and they have existed for over 130 years. The first coupon offered a free Coca-Cola in 1888. By 1913, more than 8.5 million of those coupons had been honored. One hundred years later, it was estimated that 80% of all American families used coupons. They are an essential part of modern life.

Most Americans get their coupons either in the mail or in newspapers or weekly advertising fliers at grocery stores. These fliers are often available to consumers as soon as they walk through the store’s front door. Many grocery store coupons can also be found on the items themselves. You might see what is called a neck label coupon on a bottle of wine, or a coupon on a box or bag offering $1 off on the purchase of two identical or similar items. These coupons are put on the items by representatives of the manufacturing company and not by the store.

You can also receive electronic coupons through mobile phone apps. Online shoppers receive coupon codes or promo (for promotion) codes that they can type in before finalizing their purchases.

There are also online coupon services. Apps like Groupon and Yowza!! will store coupons for goods, such as ice cream or home electronics, as well as for services, like haircuts and junk removal. These apps charge fees to carry these coupons, but there is no implied endorsement of the service provider. It is a very good idea to read the terms and conditions (Ts and Cs) for any service being offered through these apps. Look for the phrase, “May not be combined with any other offer.” This means that something which may already be on sale cannot be reduced further when combined with a coupon, and you can’t use more than one coupon to purchase the same item.

And every coupon has an expiration date. Some coupons can be redeemed, or used, for up to a month or longer after they become available, but many coupons may only be redeemable for a week. Remember that a coupon is a promotional tool, and all promotions are for a limited time. Be sure to always look for the expiration date on any coupon.

We also need to talk about what is probably the most controversial aspect of coupons – how to pronounce the word.

Coupon comes to us from the French couper – to cut, and pronounced like coo-pay. This etymology of the word has a double meaning since it indicates a cut in the price of an item as well as the way in which coupons were used for centuries. We cut them out of newspapers.

Honoring the French, coupon is properly pronounced as Koo’-pon. However, many in the U.S. pronounce it as Cue’-pon or Kew’-pon. It seems to be a regional pronunciation, with much of the middle part of the country preferring the second pronunciation. I have heard arguments on this subject over the years, including one very recently, and people are very split on this. How this developed is anyone’s guess. I can’t explain how anyone could look at that word and conclude that it needs to be pronounced like a Q, but many do.

So, I’m curious. How do you pronounce coupon?