Few things in life are as enjoyable as a picnic. When I was living in France we would often pack un panier for an impromptu lunch to break up the drive to the country or simply for an outing to enjoy nature. Last week’s post – with its oranges sur les marches du Sacré Coeur – evoked fond memories and reminded me of just who much I love a French picnic. 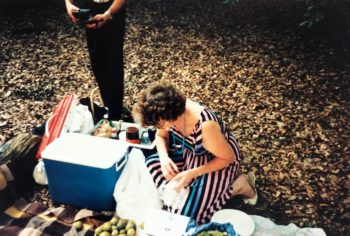 A baguette, some ham, du fromage, de la salade, et des fruits1some cheese, some lettuce, and some fruits.. Perhaps even a bottle of wine! We would often stop on our way to my family’s country house and have lunch in the forêt de Fontainebleau. In the morning we’d make a trip to the marché to pick up what we needed, load up la voiture, and head out.

If we were travelling in the other direction towards la Bretagne and the shore, one of France’s well-appointed aire de repos would serve as our stopping point.

In my early days in France, my host parents took me to visit Versailles where we lunched on lawns where once French nobles dined. 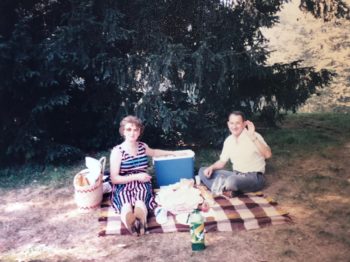 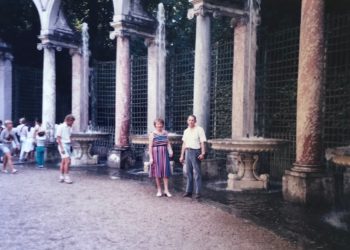 The Italian-born French singer Nino Ferrer released Les cornichons in 1966. Cornichons are pickles, but very particular tiny French gherkins. They are a perfect accompaniment to the kinds of things you might take on a picnic … or find on une planche de charcuterie in Québec.

The video might not be much to look at, but it has the best sound quality I could find. If you like the song and want to see more, there are some decidedly different options like this modern remake or this one with a charming dancing cornichon!
Did you notice the change between the first part of the song and the end of the song in the articles? The beginning uses the partitive article before switching to the definitive article. The choice of article changes whether you are talking about something specific vs. things in general or an indefinite quantity. Read more here.

Unfortunately the weather this past week across much of France has not been the kind that encourages picnicking. It was so cold in fact that many farmers and vintners experienced catastrophic damages that will affect the whole growing season … if it hasn’t already put an end to it for this  year.

The impact of the recent freeze was so great, according to this news report, because unusually warm temperatures in March had caused many plants to start budding already.

All photos taken by and used with permission from Tim Hildreth