Do You Know How To Write Like A Native? Posted by John Bauer on Sep 7, 2016 in Culture, Vocabulary

Knowing the words for punctuation is hard, but the problems don’t end there. You also have to learn all the small differences in how they are used in French. After that, talking about l’écriture (writing) itself is a new challenge. All those years in k-12 education learning about grammar may not be useful when you need to write in French! 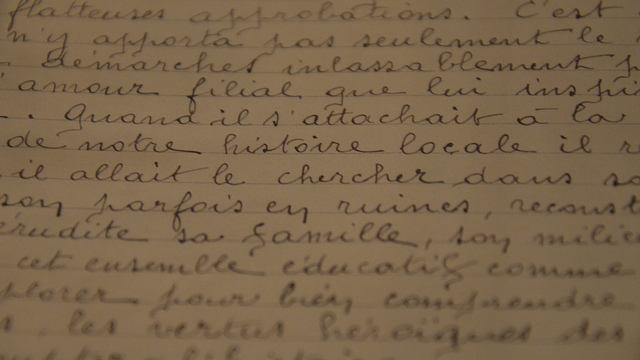 While writing mon mémoire I’ve had to look up how to say many things. I’ve also had to find out how to talk about l’écriture itself. C’est-à-dire (that is to say), I needed to know how to say words like, une phrase, un paragraphe, un sujet, un prédicat, etc (a sentence, a paragraph, a subject, a predicate, etc).

Once you know le vocabulaire (the vocabulary), and can talk about what you have written, there’s another problem. The hardest thing to understand as a non-native speaker is how something can be grammatically correct, but sound strange.

Many of les corrections I receive are about making something I wrote into une phrase qui sonne naturelle (a sentence that sounds natural). Whenever I write in French, I ask un francophone natif (a native French speaker) if what I wrote sonne naturel (sounds natural).

Ce processus (this process) of figuring out how to talk about l’écriture and ce qui sonne naturel is all part of la   (proofreading).

Other than des phrases qui sonnent bizarres (sentences that sound strange), the other big advantage of la relecture is finding les fautes d’orthographes (typos, spelling mistakes). All that is hard enough dans ma langue maternelle (in my native language), but in French it is la catastrophe assurée (a recipe for disaster).

Surtout (above all), because without them mon mémoire would be full of des fautes d’orthographes, but also because it helps me improve my French!