Food and drink in Brittany Posted by Tim Hildreth on Aug 22, 2017 in Culture, Vocabulary

I am in Brittany this week getting ready for a very special wedding. As promised last week, this week I’ll share a snap shot of some of the things I’m most looking forward to eating not just here in Bretagne, but also in my few days in Paris. And in a few weeks*, more stories and pictures from our actual trip! 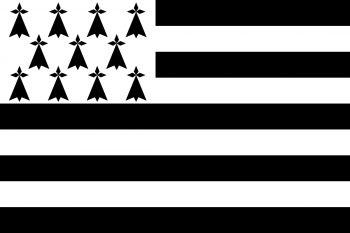 The flag of Brittany

We’re starting our tour of France in Paris (even though by the time you read this, I’ll already be en Bretagne!). Getting to Paris can be a chore, since the décalage horaire seems to affect me more as I get plus vieux. When I was plus jeune I could get off a plane and spend the whole day enjoying Paris . . . before ending up in the wee hours of la nuit (the night) enjoying un bol de soupe à l’oignon (a bowl of onion soup). It might be summer, and I might not be as young as I once was, but I’m planning on finding myself a délicieux (delicious) bowl of onion soup. 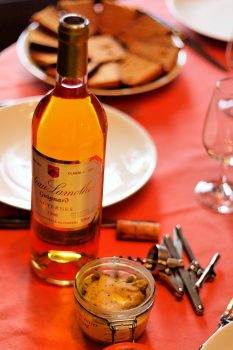 I know this dish can be controversial, but I have been a fan since my first trip to France il y a trente-et-un ans (31 years ago). Le foie gras (fatted goose liver) may not be to everyone’s taste, but I assure you it is délicieux. Le foie gras on some nice toast points with a nice Sauternes (sweet white wine from the Bordeaux region of France) – for my money (and it’s not cheap!) – can’t be beat as the opening course** of a perfect French meal. 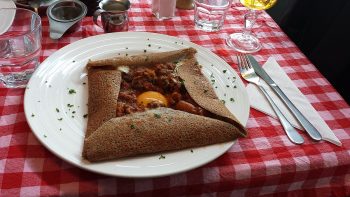 More savory than a crêpe, une galette (a buckwheat-flower crepe) is often served as an evening meal in Bretagne. I prefer mine with un œuf, du jambon, et du fromage (gruyère de préférence) (en egg, ham, and cheese (Swiss, please)), but you can find galettes stuffed with all sorts of savory fillings from des asperges to les champignons.

Finally to wash it all down, a nice glass (or in Bretagne more likely une bolée/a large cup, almost a bowl) of cidre (the local hard cider, more like a sparkling apple-based wine than the more beer-like hard ciders of England or which have become more popular in the US of late). Le cidre is crisp, dry, and refreshing . . . and pairs perfectly with une galette or a nice crêpe.

* Le mardi 29 août (Tuesday, August 29) I will actually be on a plane flying home from France. I’ve already prepared a special “end of vacation” post for you that I hope you’ll enjoy.
** The first course in France, what we would call in English the appetizer, is called un entrée (an entree). The entree in English, is the main dish which follows the entrée. In French, that main dish (after the appetizer/entrée) is called le plat principal (the main/principle dish).