I was poking around online this week and came across a great video about the first French TV commercial. And since, as John reminded us last week, it’s almost Halloween, I thought it would be fun to look at a cute recent pub (short for (la) publicité / ad or commercial) about les bonbons (candy). 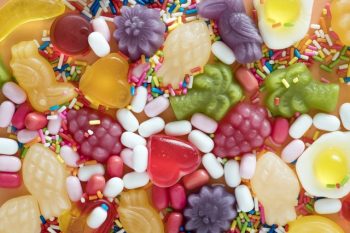 Watch out! While the related term un spot publicitaire is masculine, the word pub is feminine … not to be confused with un pub which refers to an English-style drinking (and eating) establishment (and is pronounced accordingly)!

Selon ce clip de M6 info (According to this video from M6 info), the very first TV commercials in France (including one pour le fromage Boursin / for Boursin cheese) aired le premier octobre, 1968 (October 1, 1968)*. Advertising around the world has evolved a lot since those early days, but I still find French TV commercials among the most entertaining.

^ Tagada is an onomatopoeia for the sound of a horse galloping in French … it is apparently also an insane amusement park ride in some parts of the world!
^^ This formulation should of course be “ce n’est pas” but it is very common for French speakers (of all ages) to omit the ‘ne’ when speaking, especially in informal/familiar conversations.

Photo by rawpixel.com from Pexels [CC0]