I’m a little late, but before we get started, I’d like to wish all those who celebrate around the world, un très Joyeux Noël! (a very Merry Christmas!). And speaking of Noël, did you ever wonder (like I did recently) where that word comes from or just what it means? If so, read on to find out more … and to learn about one of my very favorite traditions de Noël (Christmas traditions). 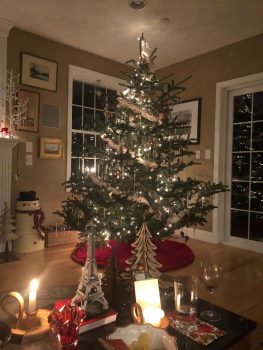 I’ve always found the word Noël a bit of an enigma. Compared to it’s nearby European neighbors, Noël doesn’t say much at all. The English word Christmas is pretty self-explanatory (as are the Spanish Feliz Navidad / Joyous (or Happy) birth and German Frohe (or Fröhliche) Weihnachten / Merry (or Joyful) Holy Night).

To answer my question I started where I often do, on the internet . . . which as is often the case, was both less than helpful, and full of fun surprises. In the end though, with a little sleuthing (and the help once again of my trusty Petit Larousse), I was able to confirm that the most likely origins* of the word Noël (and of its meaning) is a transformation of the Latin phrase natalis dies / day of birth with the dies dropped and the natalis losing some consonants and ‘softening up’ so to speak as words do over time.

One other thing about Noël that often confused me was that, despite the fact that Noël is a masculine noun (as attested to by the Joyeux**), I would sometimes hear people talk about la Noël. The reason it turns out is actually quite simple: while Noël is masculine, the word for holiday in French (fête) is feminine, and when someone says la Noël, what they’re really saying is la (fête de) Noël . . . and leaving out the fête!

Like anyone, I like les cadeaux (pressents). And I have to admit that I get a little carried away with les décorations et l’arbre de Noël (the decorations and the Christmas tree). But my very favorite Christmas tradition has to be the Christmas Eve (or sometimes as the case may be, very, very early Christmas morning!) dinner. Traditionally held after la messe de minuit (midnight church service), le Réveillon reunites family and friends around a wonderful meal, wines, and festive desserts. A few years ago, fellow blogger Josh D. wrote a great post all about le Réveillon here where you can read all about the traditions. For this year, I thought I’d share some photos of my own from some of my favorite Christmas Eve meals through the years. 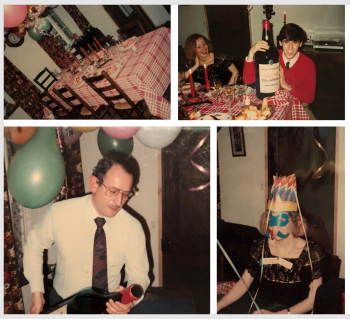 Noël 1985 during my first trip to France. Check out that bottle of wine! 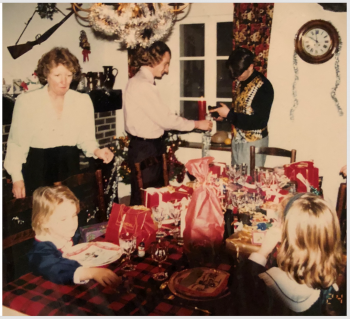 1992 found me back in France for my second Réveillon.

Since marrying into my French Canadian in-laws, le Réveillon has once again become part of our family Christmas traditions. There are more people around the table than in those early Réveillons but it just makes the holiday brighter!

* Other theories on the origins of the world Noël include older pre-Christian Gaelic and Celtic pagan celebrations to the returning sun god (the winter solstice – December 21 – being the shortest day in the northern hemisphere).
** If Noël were a feminine noun, we would say Joyeuse Noël . . . But of course we don’t. That would be wrong.