Everything is named after this 250 year-old German Posted by Sten on Sep 22, 2019 in Culture, Language

On September 14, last week, the Geburtstag (birthday) of one of the most important German Entdeckungsreisender (explorers) was celebrated. Seen as a “Vordenker für das 21. Jahrhundert” (pioneer for the 21. century), Alexander von Humboldt made remarkable Entdeckungen (discoveries) and made a mark on different scientific fields and well, naming things. Let’s have a closer look on the 250. birthday of this famous German! 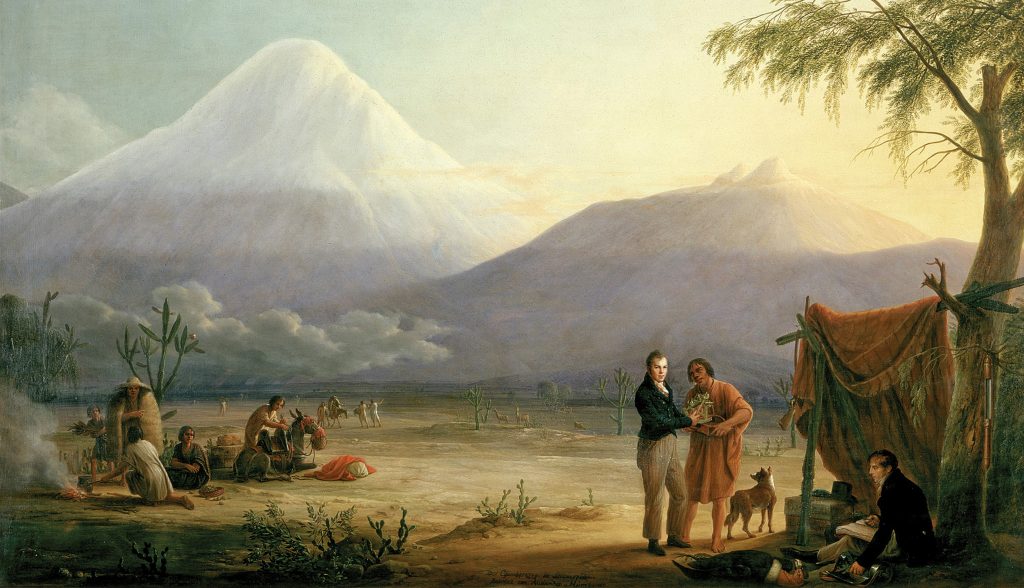 Painting by Friedrich Georg Weitsch from 1806, showing Humboldt (standing) and Bonpland (sitting) in front of the Chimboranzo (Image from Commons.wikimedia.org, public domain)

Even at a young age, Humboldt held promise. Another legendary German, Johann Wolfgang von Goethe, wrote in 1794 about then 25-year old Alexander: “Man könnte in acht Tagen nicht aus Büchern lesen, was er einem in einer Stunde vorträgt” (What he propounds in one hour, one couldn’t read from books in eight days). At that young age, Humboldt was knowledgeable in several languages and fields of study. Especially geology, botany and similar fields fascinated him.

He was talked about in Paris and Berlin. Not 5 years later, before even turning 30, he went to the Americas. Because of his reiche Mutter (wealthy mother), Humboldt could afford a Reise (trip) of several years, equipping himself with the latest Instrumente (instruments), like thermometers and telescopes.

On July 16, 1799, Humboldt and his French colleague Aimè Bonpland disembark in the Americas in Cumanà, New Grenada, in today’s Venezuela. Angewidert (disgusted) by the slave markets there, he wrote texts against Sklaverei (slavery), becoming a proponent of abolitionism.

On simple Boote, they went down the Orinoco river and after three months found a Verbindung (connection) to the Rio Negro, a huge discovery at the time. Later, in June 1802, Humboldt and Bonpland climbed the Chimborazo, at the time believed to be the world’s tallest Berg (mountain). They don’t make it all the way to the top of the 6,310 meters tall volcano, but by getting up to 5,600 meters, they set a record they held for a long time. Despite having less than optimal equipment. At the end of the same year, the two colleagues untersuchen (research) the cold Strom (current) off the coast of Peru, which was named, and to this day is known as Humboldtstrom (Humboldt Current), after its discoverer. They then sailed to Mexico, the United States, where they met president Thomas Jefferson, and finally returned to Europe in 1804.

Even after this Reise, he was not done discovering. Years later, he traveled the Russian Empire, an 18000 kilometer trip leading him from the Newa in St. Petersburg to the Altai-Gebirge (Altai mountains), which flows from today’s Russia into Mongolia and Kazakhstan.

In the years of his Russia trip, he also began writing his book Kosmos (Cosmos), where he brings together his findings from all his travels. The name of the book comes from one of his most famous ideas, that nature is a connected whole. Already in 1800, he warned of the destructive human influence on nature. This is partly why he is referred to as a Vordenker für das 21. Jahrhundert.

While some believe he is overrated as a Wissenschaftler (scientist), others admire him like the “founder of nature”. Whatever his significance really is, one thing is clear: the name Humboldt appears A LOT. Let me explain

Hauptgebäude (main building) of the Humboldt-Universität (Humboldt University), or simply HU in Berlin, with the Denkmal (memorial) of Alexander von Humboldt in front of it. However, Alexander is not the only Humboldt related to this university. The HU is primarily named after his brother, Wilhelm, who held a prominent position in the government at the time and introduced breakthrough reforms in education. (Image by Christian Wolf at Commons.wikimedia.org under license CC BY SA 3.0)

Of course, with Humboldt’s international fame, a ton of streets, lakes and parks are named after him, especially in Germany.

However, Humboldt has a much bigger “name legacy”. During his life, he discovered more than 300 plant species and 100 animal species, many of which were named after him. As such, there’s the Humboldt-Pinguin (Humboldt Penguin) for example, which primarily live in, naturally, the Pingüino Humboldt Natural Reserve in Chile.

Numerous Blüten (flowers) were also called after him, such as the Humboldt-Lilie (Humboldt’s lily). Since he started his career with success in the mining industry, a rare mineral found in the 1800s was named after him: Humboldtin (Humboldtine).

Humboldt and Bonpland’s Reise to the Americas also left traces in the naming of mountains. In Venezuela, you can find both the Pico Bonpland and the Pico Humboldt. The Gletscher (glacier) on the Pico Humboldt is the last remaining glacier in the country, and is predicted to vanish entirely quite soon.

A Gletscher in Greenland was named after Humboldt, too. And mountains in Tibet, Antarctica, New Zealand, New Caledonia and Kyrgyzstan.

His name made it into space, too. The Mare Humboldtianum (Sea of Humboldt) is a Mondmeer (lunar mare) on the Moon. In the 1970s, Alexander von Humboldt became the namesake for an asteroid.

He also left his mark on the United States. The state of Nevada was almost named after him. Today, eight towns and three counties bear his name. American Explorer John C. Frémont named the Humboldt River that flows through Nevada. The state is also home to the Humboldt-Toiyabe National Forest.

How his name is so widespread all over the world shows the kind of fame he enjoyed. Even after his death in 1859, his name endured. It slacked off in the 20th and 21st century, but it is not over – just last year, Humboldt did it once again. We now have the Alexander von Humboldt-Rose!

Do you know of other places named after Humboldt? Are there people from your country that have things named after them all over the world? Let me know in the comments below!