I have  been a fan of Künstler (artist) Frida Kahlo for a long time. If you don’t know her for her Kunst (art), you’ll most likely know her for her Augenbrauen (eyebrows) or for the Affäre (affair) she had with Leon Trotsky. 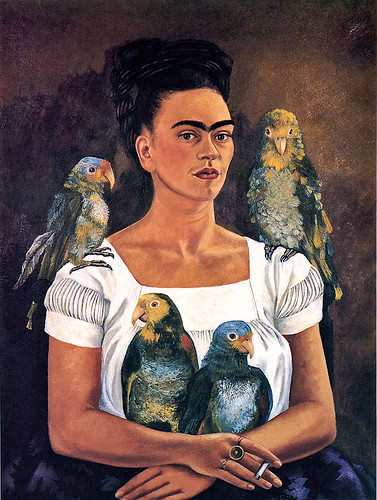 Photo: lippyrosof on flickr.com under CC BY 2.0

She was a pretty fascinating woman in all respects. But did you know that this Mexican-born artist had German blood, too? Here are a few facts about the German side of Frida Kahlo.

Frida Kahlo was half Mexican and half German. She was born in 1907 in Coyoacán, Mexico to Matilde Calderon y Gonzales, and Guillermo Kahlo.

Guillermo Kahlo, Frida’s dad, was born in 1871 in Pforzheim, Germany, to Jakob Heinrich Kahlo and Henriette Kaufmann. He left Germany for Mexico at 19 after his mother died, and never returned. Upon arriving in Mexico he changed his name to Guillermo Kahlo, as it sounded more Spanish than his German name; his real name was Carl Wilhelm Kahlo.

There is some dispute over Wilhelm Kahlo’s true ancestry. Although Frida claimed her father was of Hungarian-Jewish descent but grew up in Germany, a book called Frida’s Vater (Schirmer/Mosel, 2005) claims he was descended from German Protestants, with many other researchers coming to the same conclusions. It could be that Frida lied about this as a way of distancing herself from her German ancestry in light of the rise of Nazism during the 1930s, and showing solidarity with the Jewish people. Here is one such article that addresses this possibility. 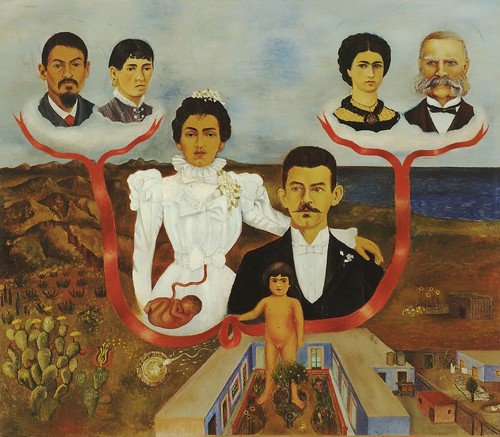 “My Grandparents, My Parents and I” by Frida Kahlo (Photo by libbyrosof on flickr.com under CC BY 2.0)

You may see Frida’s name spelt Frida or Frieda. Although it is spelt Frida on her birth certificate she spelt it Frieda until the late 1930s (according to Hayden Herrera, anyway, who wrote the biography on her). Why Frieda? Because Frieda is a play on the German word Friede, which means peace. She apparently stopped spelling it the German way with the rise of Nazism – again, perhaps, to distance herself from her German roots during this time.

Frida writes in German in one page of her published diary. Sadly this is not original writing; she simply writes down one verse of Mack The Knife from Brecht & Weill’s Die Dreigroschenoper (The Threepenny Opera). However, the various errors in it hint that she has written it from her own memory, rather than copying it from somewhere else. This shows that she had at least some familiarity with the German language!

German page from Frida’s diary (“The diary of Frida Kahlo – an intimate self-portrait). Own photo.

See if you can read it and spot the errors (if you can read her handwriting!). As always, I hope you’ve enjoyed this post, and please feel free to leave a comment!