Guten Tag! Today I’m tying two topics together: An untranslatable word (we haven’t had one of those for a while!) and a classic German children’s story. One of these inspired the other. Want to learn more? The German word I am focusing on today is der Zappelphilipp.

What does der Zappelphilipp mean?

A ‘Zappelphilipp’ is a word given to a child who is restless, fidgety, and generally cannot sit still.

What does der Zappelphilipp literally translate to?

‘Zappel’ comes from the verb ‘zappeln’ – to fidget. ‘Philipp’ is exactly what it looks like – a boy’s name. Why Philipp? The name comes from the Heinrich Hoffmann character in Struwwelpeter, a 19th century German children’s book. However, you can call any child a Zappelphillip; they don’t need to be called Philipp. They don’t even need to be a boy!

Read on for more on the original Zappelphilipp! 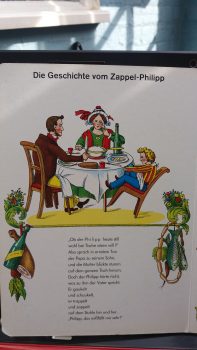 Der Zappel-Philipp. Own photo from the book Der Struwwelpeter by Heinrich Hoffmann.

Die Geschichte vom Zappelphilipp is a story from the 19th century book Struwwelpeter, a collection of short stories by Heinrich Hoffmann. These stories were designed to show children the perils of misbehaving. In Zappel-Philipp, Philipp can’t stop fidgeting at the dinner table. His parents tell him to stop it, but he doesn’t listen. In the end, he falls off his chair and the tablecloth and crockery fall on top of him. He gets off lightly, though, compared to the children in the other stories, most of whom die! I covered one of these stories, Die gar traurige Geschichte mit dem Feuerzeug (‘The very sad story with the matches’) in this post.

This story, and indeed the whole collection of stories in Struwwelpeter are regarded as children’s classics in Germany. So it is no wonder that the word Zappelphilipp has made it into everyday language.

How would you use der Zappelphilipp in a sentence?

It’s very easy to use. You just say it as if you’re calling someone a name. Something like, ‘Hör auf! Du bist so ein Zappelphilipp!’ — ‘Stop it! You’re such a Zappelphilipp!’

What is the closest English equivalent to der Zappelphilipp?

The word ‘fidget’, used as a noun, is the closest I can think of: ‘You’re such a fidget’. Any other suggestions are more than welcome!

I hope you’ve enjoyed this post. To finish, I’ll leave you with an audio recording of Die Geschichte vom Zappel-Philipp, so you can listen to it in German and read along with the English subtitles. 🙂