Guten Tag! Today we’re going to look at Germany through the lens of urban exploration. When travelling, I am always fascinated by places that are abandoned (verlassen), eerie (unheimlich), or otherwise strange (seltsam), so I thought I’d write a series of posts on places in Germany that meet that criteria! If you are also a fan of abandoned places, I hope you enjoy this first post on Spreepark, Berlin. 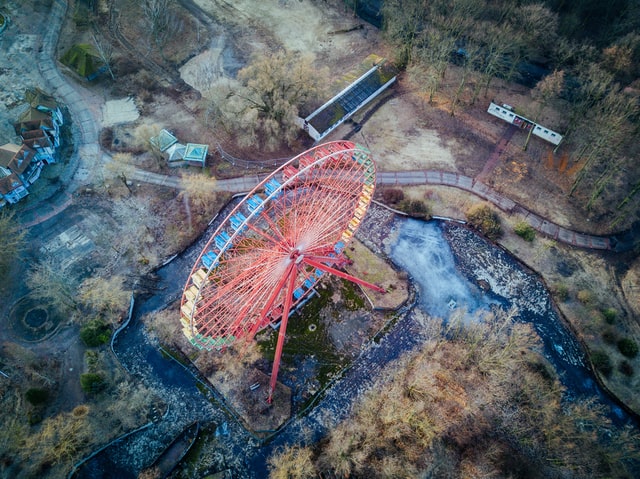 Spreepark from above. Photo by Jaromír Kavan on Unsplash

Spreepark was an amusement park which opened in 1969 in the former East Berlin. When it first opened, it was called Kulturpark Plänterwald Berlin – its name changed to Spreepark Berlin in 1989.

In its heyday, Spreepark was a hugely popular amusement park that would attract more than a million visitors each year. But by 1999, the park had started to incur a lot of debt (die Schuld), and its visitor numbers had started decreasing rapidly. Unable to recover, the park closed down in 2001, and its founder, Norbert Witte, moved to Peru, taking several of the park’s rides with him (essentially, it seems, he abandoned his own park in an attempt to escape his debt and start the company again in another country – a venture that was unsuccessful, as he got caught smuggling cocaine (das Kokain) from Peru to Germany in his own Fliegender Teppich (‘Flying Carpet’) ride!). 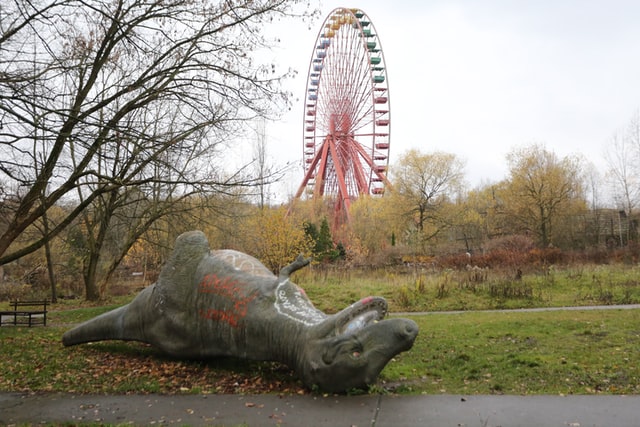 Spreepark – abandoned since 2002. Photo by Vitor Fontes on Unsplash

The park has been abandoned since 2002, when it became a source of fascination for ‘urban explorers’ from around the world. Though it was fenced off and entry was largely verboten (forbidden) – with the exception of official, guided tours – that didn’t stop people from sneaking in and wandering around to take photos, and take in the eerie, abandoned atmosphere of what was once a thriving amusement park.

Want to take a look around Spreepark for yourself? Here is a video of the abandoned park from 2019 (in English):

What’s the future of the abandoned Spreepark?

There are plans to restore Spreepark into a place of ‘Natur, Kultur, und Geschichte’ (nature, culture, and history). In 2014, Berlin bought the Spreepark, and Grün Berlin (‘Green Berlin’) started making their plans to transform it into a place people can freely visit again, whilst retaining the history and culture of the place. Some of the attractions – such as the Wildwasserbahn (log flume) – will remain as they are, as a ‘lost place’, while others – such as the Riesenrad (ferris wheel) – will be fully repaired & restored. This process only began in 2018, so it’s still in the making. Here is a video you can watch about the restoration plans (in German):

Have you ever visited the Spreepark? Would you like to? And what other, abandoned places in Germany would you like me to write about?