How the German Word “Fräulein” Disappeared Posted by Sten on Feb 18, 2021 in Culture, Language

Language moves and evolves, often along the lines of what a culture still deems acceptable or not. German is not immune to this, of course, and this week marked the 50th anniversary of the disappearance of a belittling word: Fräulein. A “little woman”. It disappeared in legal ways, at least. That doesn’t mean you won’t ever hear it anymore. What is a Fräulein, what was and is its meaning in German, and how was it banned?

What is a Fräulein? 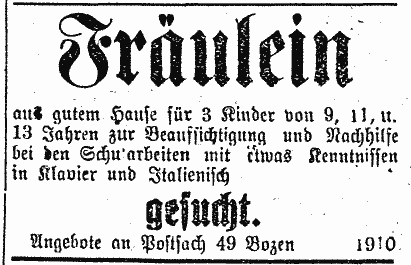 Fräulein gesucht! Job advert for a nanny from 1910 (Image by Bartleby08 at Commons.wikimedia.org under license CC BY SA 4.0)

A Fräulein is, literally translated, a “little woman”.

The word das Fräulein is quite obviously a derivative of the German word for woman: die Frau. Belittling of a word in German comes with the ending -chen or -lein. For example: das Mädchen (the girl) and das Fähnlein (the little flag). So that’s how Fräulein simply means “little woman”.

Interestingly, Frau comes from the althochdeutsch (Old High German) word frô, which means Herr (Mister, sir, lord), a very male word. So for a long time, linguistically, the Frau was like the extension of the man.

Into the Middle Ages, the Jungfrau (“young woman”, virgin) was simply a woman that wasn’t married (yet). Later, when Christianity really took hold, the element of Jungfräulichkeit (virginity) entered the mix, with Maria being the Jungfrau. So, the unmarried women were called by a different name: das Fräulein or die Jungfer, a derivative of Jungfrau.

Initially, both Jungfrau and Fräulein were only used to refer to unmarried women of royal standing, like the word “damsel”. For example the daughter of a Fürst (monarch) was a Fräulein (also see Burgfräulein – a “castle lady”). Over time, the terms became more and more colloquial, to the point that Fräulein was bastardized to Frollein, and was used as a way to address a “Miss” around the late 19th to early 20th century.

Celibacy and bans – new meaning for the Fräulein 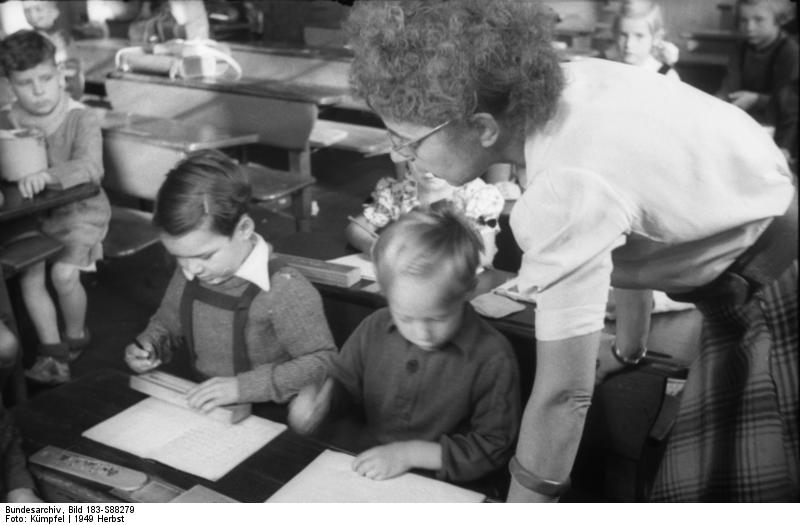 In the German Empire from 1880 to 1919, a so-called Lehrerinnenzölibat (female teacher celibacy) was in force. According to this, a female teacher was by law not allowed to be married. If she did get married while being teacher, this celibacy law called for the woman to get fired. In general, a Berufstätigkeit (professional occupation) for women was seen as a pre-marital thing. Once married, a woman was not deemed to be able to handle both a job and a family. Furthermore, women were seen as unnötige Konkurrenz auf dem Arbeitsmarkt (unnecessary competition on the job market). Interesting how a woman that couldn’t handle a family and a job is simultaneously a threat for men trying to get a job… If you want to learn more about the Lehrerinnenzölibat, look here.

Similar rules to connect the marital status of a woman to her employment existed in Germany until 1957. 1957! At that time, husbands lost their right to prohibit their wives of getting a job. So finally, Frauen could get a job without having to worry about their marital status. By law, that is.

The word Fräulein stuck, hartnäckig (stubbornly), as a way to address women at the workplace. For example in the supermarket, in a professional environment:

(Miss Mack, could you please come to the meat counter?)

So even in a work setting, you could be called Fräulein.

Fräulein was next to the married Frau and the Herr (used for all adult men) used as a formal Anrede (address). Frau and Herr are already short, so they would not be abbreviated. Fräulein, on the other hand, was shortened to Frl.

While in 1955, Bundesinnenminister (Federal Minister of the Interior) Gerhard Schröder (CDU) already ordered that in amtlichen Schreiben (official letters) women were to be addressed as Frau, if they so wished, the general rule was still to address married women as Frau and unmarried women as Fräulein. As Schröder wrote:

(“The designation ‘Mrs’ is neither a civil status designation nor a part of the name, nor a title that should or could be conferred. Nor is it synonymous with ‘Wife’. Rather, every unmarried female person is free to call themselves ‘Mrs’. This option is increasingly being used. It is therefore justified and necessary to address unmarried female persons also in official dealings with “Mrs”, if they so wish.”)

So a Fräulein had to insist to be addressed as Frau. It took another 16 years before the option became mandatory. On February 16, 1971, it was announced that the use of the word Fräulein was no longer allowed for Bundesbehörden (Federal authorities):

Finally! So since then, the Anrede Herr/Frau (Sir/Mrs) was standardized in German, and the use of Fräulein in any official way or in relation to a marital status fell increasingly out of use. 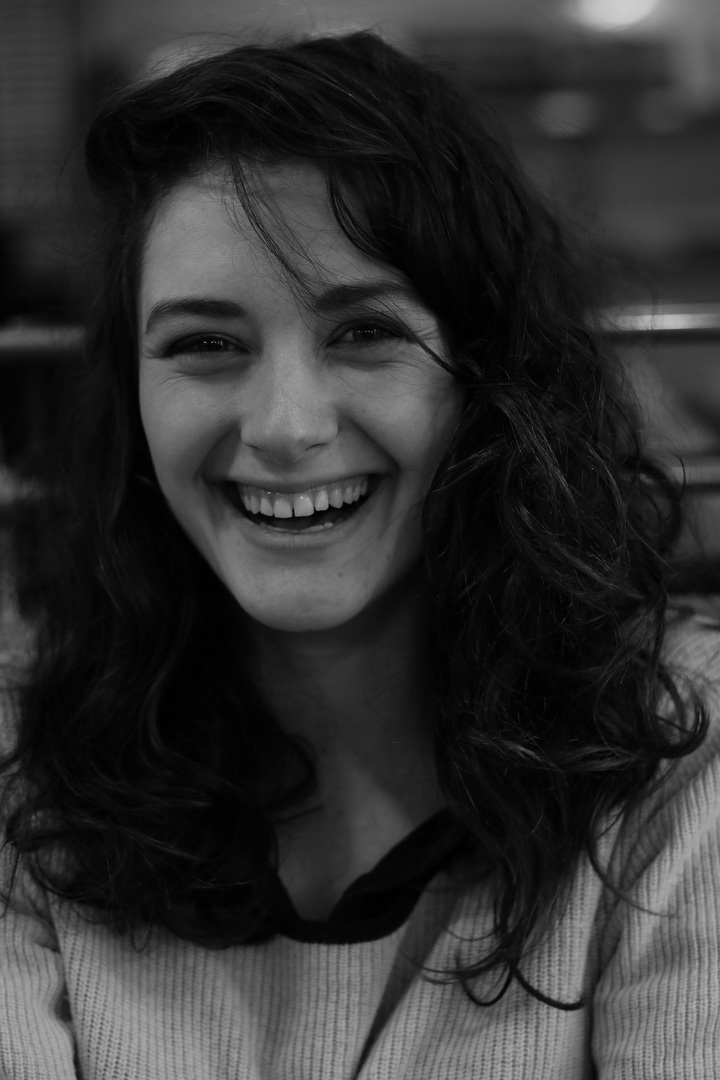 A young woman that may be addressed with Fräulein by some, perhaps without malintent – but still, it is wise to avoid it anyway. (Image from pxhere.com)

If you still hear Fräulein today, it is often used to speak to younger women and mostly by older men or women. With the history about the word, however, you can imagine that it has a clear diminutive tone, so avoid using it. I don’t think anybody appreciates being called a “little woman”, especially in a professional capacity!

However, you may hear it now and then as a way to refer to a woman’s youth and attractiveness. German celebrity Iris Berben, for example, called it a “kleine private Freude, dass ich noch ein Fräulein bin” (“little private joy that I am still a Fräulein”) in 2012.

Have you heard or used the word Fräulein before? In what way? What do you think about the word, is it ok to still use it? I want to know, so please tell me in the comments below!