Oktoberfest Celebrations Outside Germany Posted by Constanze on Oct 6, 2014 in Culture, Traditions

Oktoberfest is undoubtedly Germany’s largest and most famous festival, drawing in millions of visitors each year. Its home is in München, the capital of Bayern. This is where it originated, and where it has been held each year since the very first one in 1810. I recently wrote a post to mark the beginning of Oktoberfest 2014, which you can read here. 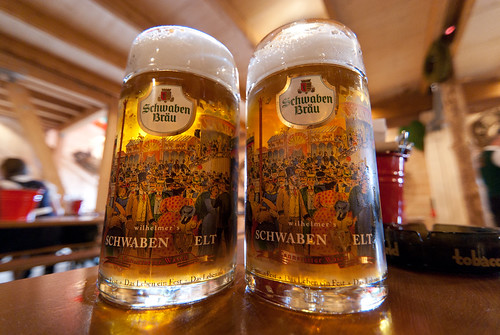 Prost! Photo by lendog64 on Flickr.com under CC BY-ND 2.0

But this is not the only Oktoberfest in full swing at the moment! Come September and/or October, there are many towns and cities all over the world that host their very own Oktoberfest celebrations. Some do it because their country or city has German roots, and because the celebration is as traditional to them as it is to Germany itself, whereas other countries do it to pull in the tourists. After all, Oktoberfest is very famous, but not everybody can afford to go to Germany to experience the real thing – so many cities simply bring the Oktoberfest to them!

Here are just a few of the many Oktoberfests being held outside of Germany in 2014.

London Oktoberfest 2014. London being London, this Oktoberfest is almost as famous as the real thing! This year, it is being held in Lambeth for the first 2 weekends, and in Canary Wharf for the following 2 weekends.

Oaktoberfest 2014 in San Francisco, USA. Named this way to combine the words Oktoberfest and Oakland, where it takes place. According to the website, this celebration “begun in the early 1900’s when Beer Gardens and German vacation resorts lined the boulevard.”

Oktoberfest Brisbane, Australia 2014. This is known as Australia’s largest Oktoberfest, and is run and organised by two Australian-German families.

Oktoberfest USA in La Crosse, Wisconsin. This celebration dates back to 1960, when town officials were trying to plan an Autumn celebration. Two German brewery employees suggested an annual celebration in the town similar to that of Germany’s Oktoberfest. The idea took off!

National Beer Festival 2014 in Villa General Belgrano, Argentina . This city was founded by Germans in the 1930s, and subsequently attracted many European immigrants who settled there. Its German history is evident in much of the city’s architecture.

Sign of the “Viejo Munich” beer factory and restaurant at Villa General Belgrano, Córdoba, Argentina, displaying the blue/white Bavarian flag. Photo by Juan Manuel on Flickr.com under CC BY 2.0

Oktoberfest in Fredericksburg, Texas, USA. This city celebrates its German heritage (evident even from the city’s name!) with an annual 3-day Oktoberfest.

Oktoberfest in Blumenau, Brazil. It’s not the first country that springs to mind as having German heritage, but the Brazilian city of Blumenau was founded in 1850 by a pharmacist named Hermann Bruno Otto von Blumenau, who arrived there by boat with 17 other German immigrants. 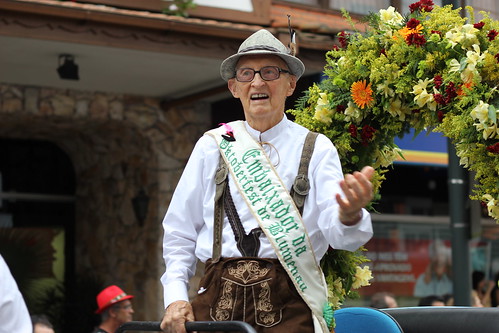 Man celebrating Oktoberfest in Blumenau, Brazil. Photo by vitorpamplona on Flickr.com under CC BY 2.0

Oktoberfest in Santa Ponsa, Mallorca. Mallorca is famous for being ‘full of Germans’, either as tourists or expats, and now the strong German presence has been recognised with Mallorca’s very own Oktoberfest.

Does your city have an Oktoberfest? Share your thoughts and experiences in the comments!