The Power of German Traffic Lights Posted by Constanze on Aug 17, 2015 in Culture, Current Events, History

Who knew a pedestrian crossing could have such an impact? Yet that’s exactly what the Ampelmann (also sometimes called by its more endearing term, Ampelmännchen) has been doing in Germany and Austria over the years!

The fascination with pedestrian crossings in Germany started with the famous Ost-Ampelmännchen, which was born in Berlin. This traffic light was developed in East Germany pre-unification, and what was so interesting about it was that it was distinctly different to the one seen in former West Germany, and anywhere else in Europe, for that matter; The West German one was a standard man that you’d see anywhere, while the East German one had a different shape, and wore a little hat. 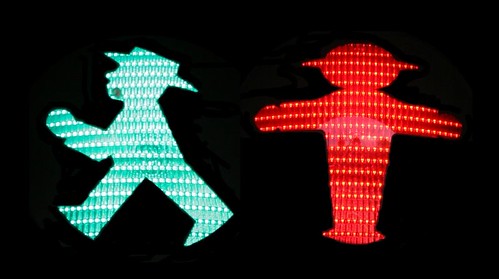 EASTERN AMPELMANN. Photo: zanaguara on flickr.com under CC BY 2.0

The eastern Ampelmann has since become a symbol of the former East Germany, being one of the only things from that time to have remained. It is much-loved, and even has its own website.

The term Ampelmann refers to the East German traffic light man, but is also a generic term for all pedestrian crossing lights. You could also use the more generic term die Fußgängerampel – ‘the pedestrian light’ – if you wanted to, to create a clearer distinction.

In recent years the Ampelmann has become a powerful little figure in more ways than one.

“Ampelmädchen – Dresden” by Iago4096 – Own work. Licensed under CC BY-SA 3.0 via Wikimedia Commons.

In late 2014, politicians in the German city of Dortmund announced a plan to make an equal number of Ampelmänner and Ampelfrauen in the city, in a bid to support gender equality and fight sexism.

This was criticised by some, however, who said that the Ampelfrau herself was sexist; they thought the representation of a German woman with a Kleid (dress) and Zöpfe (plaits) was outdated and stereotypical!

Conchita Wurst, the famous LGBT rights campaigner and ‘bearded lady’, won the Eurovision Song Contest for Austria in 2014, which meant Austria were to host Eurovision in 2015. In the run-up to Eurovision 2015, Vienna introduced a mixture of heterosexual and same-sex couples onto their pedestrian crossings. Similarly, and following in Vienna’s footsteps, same-sex pedestrian crossings were introduced to Munich’s streets in July 2015, ahead of their Gay Pride weekend.

Photo: nicokaiser on flickr.com under CC BY 2.0

It seems that the pedestrian crossing is far more than just a light in Germany and Austria. Because of the Ampelmann’s cultural status, it is now being used as a powerful means of representing the countries’ changing attitudes towards gender, sexism & LGBT rights.

And if that isn’t enough to convince you of its power, here’s one last fact to win you over: Cross the road in Germany before the Ampelmann or Ampelfrau tells you to, and you could be told off by the angry pedestrians you’ve left on the sidewalk, or, if the police catch you, even fined! Most people will wait obediently at a pedestrian crossing for the light to turn green before they walk – even if there is not a car in sight. That’s the power of the Ampelmann!

Oh, and if you get bored of waiting, perhaps you’ll be lucky enough to be at a crossing that lets you play Pong with an opponent standing across the road from you: