Rumspringa With Pennsylvania German Posted by Constanze on Aug 5, 2015 in Culture, Language, Uncategorized

It was some years ago when watching a documentary on Amish teenagers that I heard the word Rumspringa for the first time. But that sounds like a Bavarian word!, I thought. At this time I knew nothing about the Amish, let alone their German roots. Everyone knows that German is spoken in Germany and Austria, so I thought it would be interesting to look at the lesser-known language known as Pennsylvania German/Pennsylvania Dutch, spoken in parts of the United States. This is the language that the Amish community (amongst others) speak, and it is also why I understood the word Rumspringa.

The Amish are a traditionalist Christian religious group who have their origins in Switzerland and Germany. They emigrated to America in the 1730s and settled mostly in Ohio and Pennsylvania. 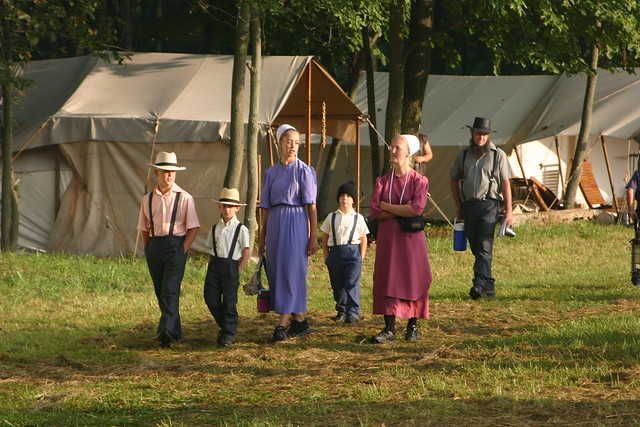 First off, a breakdown of the word Rumpspringa: This word comes from the verb herumspringen, meaning ‘to run/jump around’.

The meaning of Rumspringa: It is not literal in meaning – it does not refer to the act of running, or jumping around. This ‘running around’ refers, in fact, to the time of adolescence in a young Amish person’s life, when they can be free to enjoy their youth and try things which they would not be able to do if they joined the Amish church. The idea is to allow them to explore their freedom during adolescence, after which they must decide if they want to give it up and join the Amish church, or leave the Amish community altogether. The idea of Rumspringa refers to this freedom to do whatever they please.

The influence of English on Pennsylvania German

Naturally, American English has had significant influence on Pennsylvania German. One interesting characteristic of Pennsylvania German is that it includes some English words but makes them sound German. You may not recognise them at first, so here are a few examples to show you what I mean:

Paerdi – This is actually the word ‘Party’. Written like this, it suggests that it is pronounced ‘pear-dy’. So, it almost sounds like the word ‘Party’ when spoken in an American accent, but it is written like a German word. Incidentally, standard German uses the word ‘Party’, too, though the correct word for a party would be das Fest or die Feier.

Schtori – This is the word ‘Story’. It is written in a German style (the spelling of ‘sch’ instead of ‘sh’), but is nothing like the German word for story, which is die Geschichte. It is clearly derived from the English word, story, but its spelling suggests it is pronounced in a German way.

Deitsch Schtor –Deitsch is Pennsylvania German for Deutsch. Schtor comes from the American English word store. In other words, ‘Deitsch Schtor’ is describing a ‘German store’. Like the word Schtori, Schtor is derived from English, but is written to be pronounced in a German way. The German word for store, by the way, is das Geschäft.

Now let’s hear some of this German, shall we?!

Here are two wonderful examples of Pennsylvania German being spoken by natives.

The first has English subtitles to help you:

In this second video, the woman counts from 1 to 20 around the 2 minute mark, and then in tens from 10 to 100. Here you can hear some German you’re probably already familiar with, but spoken in a Pennsylvania German dialect. 🙂

What’s even more interesting is that both the man and the woman speak a mixture of PA German and English. Can you hear it? 🙂

What do you think of this type of German? How much of it can you understand?

I would love to hear your thoughts!!