The German Boogieman Posted by Constanze on Dec 7, 2016 in Culture

Guten Tag! Today, inspired by a kids’ song I was reminded of recently, the theme is German mythological monsters! The kids’ song is called Es Tanzt Ein Bi-Ba Butzemann. I know this song from my childhood, as many German children probably will.

The song is about a Butzemann dancing around in somebody’s house. The first few lyrics are as follows:

The next few verses talk about the Butzemann bringing apples to well-behaved children during the night.

So what is a Butzemann, exactly? This is the German word for boogieman (or bogeyman, depending on where you’re from). In fact, the word Butzemann can refer to any kind of Dämon (demon), Gespenst (ghost/spirit), Kobold (goblin) etc.

I know what you are thinking. Why on Earth would you write a Kinderlied (kids’ song) about a boogieman coming into someone’s house during the night? Wouldn’t that just terrify children? Well, yes. But that’s kind of the point.

Many traditional German kids’ stories feature a monster, ghoul or otherwise scary character to scare children into behaving themselves. If you don’t behave, the stories say, this is who you’ll see! The boogieman creature is prominent in many countries across the world, and often carries a sack to steal naughty children with. So there is the suggestion that the Butzemann in Es Tanzt Ein Bi-Ba-Butzemann will bring apples to good children, and take naughty children away with him in his sack!

But the Butzemann isn’t a one-off; characters like this are quite popular in Germany and Austria, as well as other European countries. There is the Nachtkrapp (‘night raven’), a German mthological bird that leaves its nest during the night to steal children from their beds; if a child sees it (ie. if it’s not asleep), the Nachtkrapp will eat it! The Butzemann is also in good company during Christmas time, when the malevolent characters Knecht Ruprecht (N. Germany) and Krampus (S. Germany/Austria) come out to join Father Christmas. You can read about Krampus here! 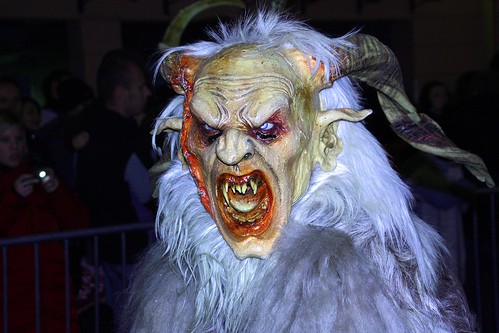 Krampus! Photo by pixelpoint on flickr.com under a CC license (CC BY-ND 2.0) 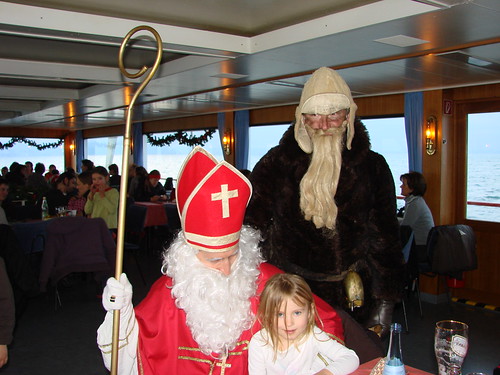 Knecht Ruprecht with der Weihnachtsmann. Photo by wm_archiv on flickr.com under a CC license (CC BY 2.0)

Do you know of any more German mythological creatures or monsters? Do you have any like this in your own country or culture? Leave me a comment and let us all know!

I’ll leave you with the tune to Es Tanzt Ein Bi-Ba-Butzemann.