The History of the German Shepherd Posted by Larissa on Mar 7, 2017 in Uncategorized

You can guess from the name, the German Shepherd originates from Germany. After getting lots of positive feedback from my last post about the history of the Dachshund (which you can find here), I’m keeping the theme of German dogs and will be writing about how and why the German Shepherd came about. 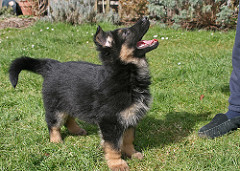 The German Shepherd originated in Germany in the 19th century and was bred to be a working dog. As the name suggests, the German Shepherd was bred to herd sheep. The breed was created by a man called Max von Stephanitz because of it’s characteristics: selbstsicher (confident), klug (clever), schnell (fast) und aufmerksam (observant/alert) – which altogether make the perfect working dog.

A Change in Name
The original name in German is der Deutscher Schäferhund, and literally translates to “the German Shepherd”. During World War I the name was changed by the UK Kennel Club as they were worried that the name would affect the popularity of the breed as it was associated with Germany (similar to the Dachshund, which also became unpopular during World War I and II). They changed the name to “Alsatian Wolf Dog” but after the war they changed it to “Alsatian” as they thought by calling the breed a wolf it might give off the wrong impression. Eventually the name was changed back to “German Shepherd”, although it is still common to hear the breed being called “Alsatian”. 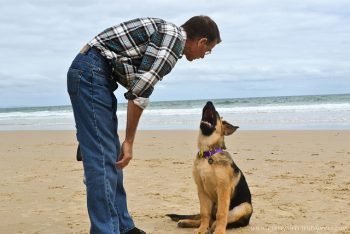 German Shepherds are still very popular and have appeared in many American films as well as the Austrian crime series “Kommisar Rex” – the main character Rex being played by a German Shepherd.

If you own a German Shepherd then let me know in the comments below! I hope you enjoyed these posts on the history of these two popular breeds of dogs.

Until the next time!