Guten Tag and welcome to another ‘untranslatable words’ post, where I bring you the quirkiest words the German language has to offer. Today’s word is a popular one that was requested by a reader: das Backpfeifengesicht. 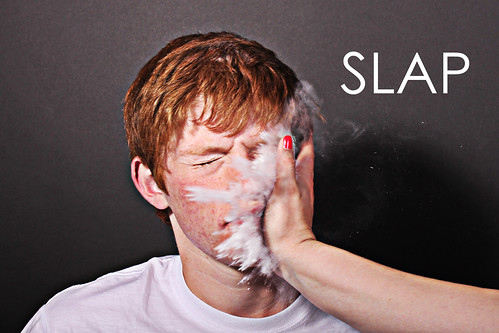 Backpfeifengesicht. Photo by freyaspargo on flickr.com under a CC license (CC BY 2.0)

What is the meaning of das Backpfeifengesicht?

A Backpfeifengesicht is the word for a face you don’t like – to be specific, a face you just want to slap or punch!

What is the literal translation of das Backpfeifengesicht?

Backpfeifengesicht looks like quite a mouthful. It breaks down into 3 separate words:

back – from die Backe, meaning cheek

So it literally means ‘cheek whistle face’. Sound strange? When you put the words back and pfeife together you get die Backpfeife, which is the German word for a slap.

So the actual translation of the word is ‘slap face’ or, as is the popular translation, ‘a face in need of a slap’!

How would you use das Backpfeifengesicht in a sentence?

You’d say someone has a Backpfeifengesicht, so for example:

It’s not used so much for people you think are unattractive (see Gesichtsbremse) but for people you don’t like, or people whose faces annoy the hell out of you for whatever reason.

It’s also worth noting that it’s not a common German word, so don’t expect to hear it on a daily basis!

What is the nearest English equivalent of das Backpfeifengesicht?

Backpfeifengesicht often pops up on lists titled things like ’10 German Words English Needs To Adopt!’ so I think it’s safe to say there isn’t an English equivalent that does it justice (feel free to prove me wrong, though). Instead, let’s take a look at three more German words related to the word Backpfeifengesicht:

die Hackfresse
A term for a person you think has a very ugly face. The word hack is from the verb hacken (to chop/mince) and die Fresse is German slang for mouth (der Mund). When put together you get die Hackfresse, which is reminiscent of the word das Hackfleisch – minced meat. So by calling someone a Hackfresse you are implying their face looks like it’s been minced. Not a very nice word, by any means!

die Grinsebacke
Made up of the verb grinsen (to smile) and die Backe (cheek), this word is used to describe someone who is always smiling! 🙂

So, who do you think has a Backpfeifengesicht? Be sure to check out more of these words by clicking the ‘untranslatable words’ tag below, and see how fascinating the German language really is!