Guten Tag, and wilkommen to week 2 of my series of posts on ‘untranslatable’ German words! In this series of posts I talk about one or more German words that there is no direct translation for in English. In my first post on this topic, I suggested that the reason for this was to do with the way the German language can combine several nouns to create new words, while the English language does not. Other times, a word will reveal something about German culture, and may exist only as a result of that. Each week I will bring you one or more of these ‘untranslatable’ words, and try to discuss their meaning. Feel free to add any comments on them, or provide alternative translations to the ones I come up with!

(Note: I put inverted commas around the word ‘untranslatable’ to point out that although the words themselves cannot be translated, the meaning of them can be).

This week, I will talk about two German words that describe opposing reactions to humiliation and embarassment. They are Schadenfreude and Fremdscham.

I will start with Schadenfreude. 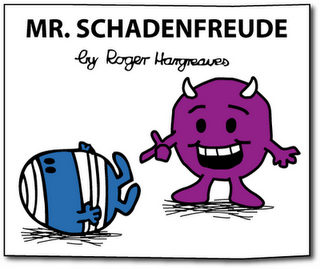 Photo by dullhunk on Flickr.com

What is the meaning of Schadenfreude?
Schadenfreude is the act of taking joy in somebody else’s pain or misfortune. This refers to the secret glee you feel when a co-worker you don’t like gets reprimanded by your boss, or the maliciously happy feeling you get when someone who thinks they are perfect makes a fool of themselves. The best translation I’ve seen of it is “malicious pleasure”.

Schadenfreude is one of the most famous German words around!

What does Schadenfreude literally translate as?
The literal translation would be “harm-joy”. Broken down, that’s ‘harm’ (Schaden) and ‘joy’ (Freude).

How would you use it in a sentence?
There is an adjective, namely schadenfroh, which you can use to describe this feeling: Ich bin schadenfroh. (I am the sort of person who takes joy in other people’s misfortunes).

What is the nearest English equivalent?
Although we definitely all feel this from time to time (admit it!), I cannot for the life of me think of an English equivalent. Snide? Spiteful? They just aren’t close enough!

Now for the other end of the spectrum: Fremdscham.

That girl is definitely experiencing Fremdscham right now… Photo by poxypixels on Flickr.com

What is the meaning of Fremdscham?
This is the utter embarrassment you feel when you see somebody else being humiliated. Examples include that awkward moment when a friend attempts to tell a funny joke but it falls flat (or even offends someone), or if you’re watching your boss give a speech with their flies undone.

What does Fremdscham literally translate as?
It is made up of the words Fremd (foreign; alien) and Scham (shame; embarrassment).So, literally, it is “foreign shame” – feeling embarrassment for someone else.

I should point out that although the German word ‘fremd’ means ‘foreign’, it is not the same as the English word ‘foreign’, which exclusively means something or someone from another country (though it does mean that in German, too). In German, you can say ‘fremd’ to mean something strange, alien, unrelated to you, etc. It is actually pretty difficult to explain. Anyway, the point is that when I say “foreign shame”, it has nothing to do with foreigners.

How would you use it in a sentence?
Here’s a good one I found on an online forum:
Die fremdscham erregendsten fb-kommentare eurer “freunde” (‘Your „friends‘“ most Fremdscham-inducing FB comments’… I think we all know that feeling)

What is the nearest English equivalent?
The word cringeworthy is probably the closest to it – though I’m not even sure if this is a proper word, and even if it is, it doesn’t specifically relate to the embarrassment felt for a person who isn’t you. Do you have any other suggestions?

And when do you experience Schadenfreude or Fremdscham in your daily lives?