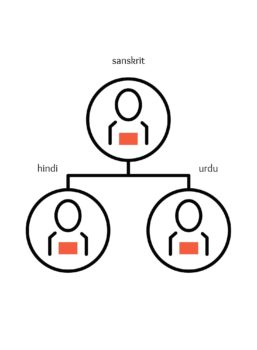 Hindi has an interesting दिलचस्प position in its family tree. The Indo-European family begot the Indo-Iranian family which begot the Indo-Aryan family who begot Hindi. Therefore, ironically विडम्बना से, it begs the question, is the Hindi we speak today begotten from Urdu? That would cause a minor अवयस्क uproar in itself given the politically induced प्रेरित किया language controversies raging in India right now.

Literary Hindi comes from Sanskrit. It is spoken in areas around Delhi. The standard form is Khari Boli. The other type प्रकार of Hindi is called Brij Bhasha, which was used during the 15th to 19th centuries. People who live in the Hindi belt speak a variety of dialects बोलियों  –  Bagheli, Bhojpuri, Bundeli, Chhattisgarhi, Garhwali, Haryanawi, Kanauji, Kumayuni, Magahi, and Marwari. The Hindi belt in north India going south to Madhya Pradesh.

People in the eastern parts of India also speak Hindi, but it sounds a lot more like Bengali than Hindi. This Hindi is known as Maithili. While in the west, people in Rajasthan speak a form of Hindi that sounds more like Gujarati than Hindi.

However तथापि, all these people consider themselves to be Hindi speakers. This is because the British Raj in an attempt to classify वर्गीकृत languages grouped them all into one.

During the Mughal Period, Hindi absorbed को अवशोषित many Persian words but kept the Devanagari script. While Urdu emerged उभरा during this period. Urdu is written in the Persian-Arabic script called Nastaliq. The Devanagari scriptwriters who used Urdu words were called Hindustani speakers. Are you confused अस्पष्ट enough?

It is also the British who introduced standard मानक Hindi into elementary schools in these regions. As a result, the urban शहरी middle class, as well as educated villagers, resorted to using Hindi instead of their regional dialect.

People who chose to speak the dialect, did so in the privacy of their home or amongst friends and family, for fear of being considered un-educated. Standard Hindi now had the same status स्थिति in North India as English had in South India. It became the language of the educated for the upwardly socially mobile.

With the advent आगमन of the television set in the ’50s, Hindi was increasingly used all over television, magazines, newspapers, and films. Today, songs and films use a mix of Hindi, Punjabi, and Urdu.

Currently, the Central Hindi Directorate which is a government agency is attempting to Sanskritize Hindi by getting rid of words that are not of Hindi origin but originate उत्पन्न करना in Sanskrit. However, non-Hindi speakers are playing tug of war by inserting an increasing बढ़ती number of English as well as regional क्षेत्रीय dialect words into the language.

If one were to take a look back through the centuries सदियों and understand that all languages evolve, one would take pride गर्व in this evolution क्रमागत उन्नति of Hindi. After all, people will use the words and languages they are comfortable with to communicate. And as long as communication is effective no matter what language, culture will be colorful, vibrant, and successful.