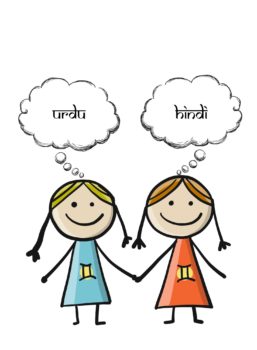 This week Urdu caused an uproar कोलाहल on social media. She was in an ad that called for the celebration कोलाहल of Diwali using the phrase, Jashn-e-Riwaaz, which means ‘celebration of rituals and traditions’.  The ad written in English was for a clothing and housewares brand called Fabindia. The retailer खुदरा withdrew the advertisement in response to the backlash प्रतिक्रिया – which came from right-wing Hindu groups and the political राजनीतिक Bharatiya Janata Party. These groups wanted her sister in the language, Hindi to be used in the ad.

We all know that words can start wars. However, it seems like even a celebratory जश्न मनाने phrase aiming at being inclusive can strike a match and light up an angry fire during the Hindu Festival of Lights.

So why the hullabaloo? Especially when Urdu has a rich cultural imprint in India? And is spoken in many parts of India? The answers lie in ignorance अज्ञान, and intolerance असहिष्णुता fueled by politics.

So, how can we use language appropriately उचित रूप से and bring about peace instead of war?

Urdu meaning literally, the language of the camp, has a rich heritage विरासत in India.  Urdu came into existence in India around the 12th century, in and around the Delhi Sultanate. It was called Hindvi, Rekhta, Zaban-e-Hindi, and other names. It is an Indo-Aryan language just like Hindi having the same grammar base व्याकरण and phonology. However,  the script is different. While Hindi is written in the Devanagari script from left to right, Urdu is written in the Person-Arabic script from right to left. It is important to note that both languages have their origins in Sanskrit.

In modern India, Hindi is associated संबद्ध with the Hindu religion while Urdu with Islam. However, history has a different story. Urdu known as Hindvi at that time was spoken in northern areas in India, especially around Delhi and Lucknow. This form of Hindi had many loanwords from Persian and Arabic due to the different conquests जीत. And it also was spoken in the South Deccan with loanwords from Telegu and Marathis.

The poet Gulam Hamadani Mashafi introduced प्रस्तावित the term Urdu to describe this Indo-Aryan mixture of Hindi, Persian and Arabic in 1780. This language had the same grammar, syntax, and phonology as Hindi, but was written in the Nastaleeq script.

There are thousands of poems, ballads गाथागीत, shayaris and comedies written in Urdu. Ancient texts are laden with poetry written by the great Sufi poet from Delhi, Amir Khusro. These texts were written in what was known as Khari Boli, which had its origin मूल in Sanskrit. However, in the 18th century, Mughal invaders आक्रमणकारी purged all texts containing Sanskrit and installed the Perso-Arabic version of Khari Boli which came to be known as Hindustani, or Urdu as it is called nowadays. This shows that the attack on language is not new.

Today, Urdu is unmistakably निश्चय linked to Islam despite its origins. And it does not help that it is the official language of Pakistan. These political-religious impunities on the language render it the center of controversy विवाद anytime it is used. Why? Because today’s ruling parties are in favor of an essentially Hindu India. The right-wing Hindu nationalists राष्ट्रवादी are in favor of ‘gharwapasi‘ or the return of anyone that is non-Hindu to be converted back to Hinduism.

So, how do we go forward using this beautiful language? As with any language, education,  with an emphasis ज़ोर on the similarities more than the differences and understanding and accepting the history as being very much a part of the heritage of India.