An bhfuil peata agat? Talking about Pets in Irish: Pearóidí (parrots) Posted by róislín on Jul 21, 2017 in Irish Language 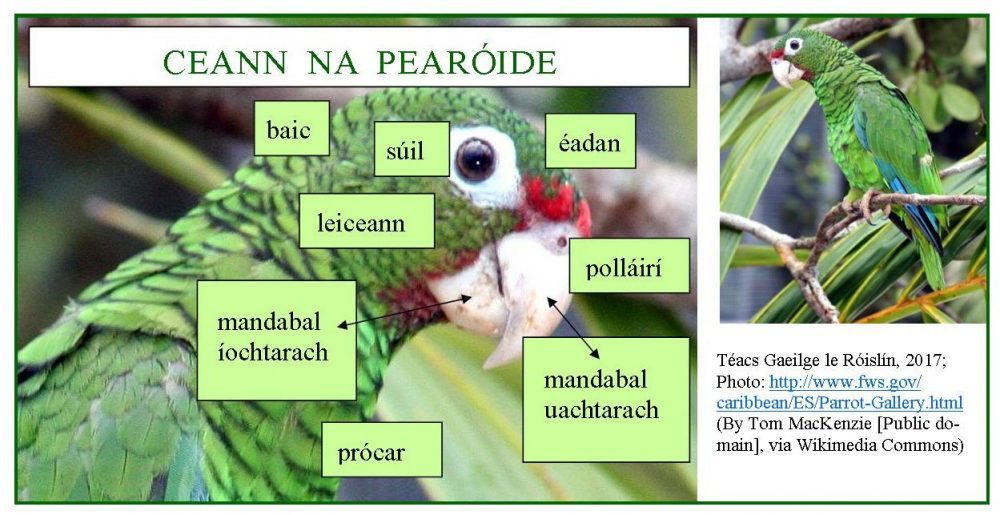 Bhuel, before we look for “freagraí” to that, did you notice that the first paragraph of this blogpost already had three forms of the word “pearóid” and that the caption for the graphic added one more.  So let’s review these before looking at the features of “ceann na pearóide.”

And it’s grammatically feminine, so:

pearóidí, of parrots, NB: same form as above; (cosa pearóidí, feet of parrots)

The form “bpearóid” is used in prepositional phrases like “ag an bpearóid” (at the parrot).

Now let’s look at the features of the parrot, as shown by the graphic.

baic: nape (of the neck, to be specific — although I’m not sure the word “nape” is used for anything but necks in English)

And here’s where it starts to get really interesting.  I would have thought of the beak of the parrot simply as “an gob.”  The word “gob” can also be used for a beak-like mouth on humans and shows up in expressions like “Dún do ghob,” which I’d say is more like “Shut your trap!” in English, rather than something reasonably civil, like “Bí ciúin, le do thoil!” or very polite like “Ar mhiste leat a bheith ciúin, le do thoil?”

Anyway, back to “an gob” and related terminology.  Although I’m sure we could simply say “gob,” the parrot anatomy chart I looked at didn’t give “beak” in general, but specifically “mandabal uachtarach” and “mandabal íochtarach.”  Of course, the chart was in English, and I’m simply translating here.  But if the chart had said “beak,” I would have said “gob.”

So, “mandabal” is the Irish for the English “mandible,” adapted for the Irish spelling system.   Remember — caol le caol agus leathan le leathan.  If we start with the vowel “a” in the first syllable of an Irish word (the “man-” of “mandabal“), we have to have a, o, or u, in the next syllable (not “e” or “i”  — it’s the vowel harmony rule in Irish).  And the same goes for the third syllable  — it can’t have an “e” or an “i” if the preceding syllable had an a, o, or u.

The word “uachtarach” means “upper,”  and you might recognize it from the phrase “Sráid Uí Chonaill Uachtarach” (Upper O’Connell Street).

And “íochtarach” is “lower,” which is used to say “Lower O’Connell Street” (Sráid Uí Chonaill Íochtarach)

Then  we have the interesting word “prócar” for “craw.”  As for “craw” being the definition, it’s pretty obscure in everyday modern English, except for things being “stuck in one’s craw.”  I’ve also read that “craw” can actually mean “stomach,” but I thought the animal-related term for that was “maw.”  So, má tá aon eolas agat faoin difear idir “maw” agus “craw,” scríobh isteach agus inis dúinn, le do thoil.

Anyway, that’s a preliminary look at “anatamaíocht na pearóide.” The two major remaining questions I have are:

a)) Do parrots have hyoid bones, and if so, is that what enables them to speak?

b)) An dtuigeann siad an méid a deir siad? (Do they understand what they say?).  Has anyone trained their parrot to say “Ní thuigim,” a very useful phrase for learners of the Irish language?

An bhfuil peata agat?  Talking about Pets in Irish: Madraí (Dogs) Posted by róislín on Jul 18, 2017 in Irish Language