Two of the key phrases associated with feallmharú Kennedy are “grassy knoll” and “magic bullet.”  These phrases have continually caught my attention, for various reasons.  One is that, as far as I know, most Americans rarely use the word “knoll” to describe very small hills.  And yet the word figures prominently in all discussions of the assassination of one of America’s most popular presidents.  And yet, if we were to do some sort of word association study, I would imagine that a large majority would associate the word “knoll” with Kennedy, not with other types of hills or similar shapes, (hillocks, hummocks, mounds, buttes, mesas, lomas, etc.).  If you add the word “grassy,” I think very few people would think “terrain” and the vast majority would think “Kennedy assassination.”

As for the “magic bullet,” a term used by detractors of the “single-bullet theory,” it represents a recent step in the concept of magic weapons.  Originally we had magic swords, such as “An Claíomh Solais,” in Irish lore (predecessor of the light saber, no doubt) and Excalibur, in Arthurian legend, to name just two geographic areas.  Fast forward to the age of firearms and we have enchanted bullets in the German legend of the Freischütz (freeshooter) and the term even shows up in medical research (Dr. Paul Ehrlich’s work on a syphilis cure, for example, as popularized in the 1940 film, 1940 Dr. Ehrlich’s Magic Bullet).  The closely related “silver bullet” also contributes to notion that a weapon may contain supernatural power.  Silver bullets were believed to kill werewolves, they appear in the Grimm Brothers’ folktale “The Two Brothers,” and they even show up in The Lone Ranger.  Now I’m not saying that those who believe there had to be more than one bullet truly believe in magic in the sense of fairy tales, invisibility cloaks, and enchanted forests.  But by referring to the bullet as “magic,” they are invoking a centuries-old tradition of belief in supernaturally powerful weapons.

I’m in no position to analyze the ballistics tests that attempt to prove the number of bullets used in the Kennedy assassination.  Here once, again, I’m simply dealing with the terminology. 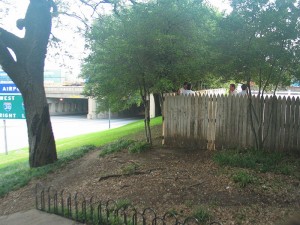 So how do we say “grassy knoll” and “magic bullet” in Irish?  Well, as usual, there are several possibilities:

For “knoll,” the typical possibilities are “tulán,” “cnocán,” and “maolchnoc.”  With the word “féarmhar” ([FAYR-wur], grassy) we have the following possibilities:

a) an tulán féarmhar: “tulán” comes from “tul” (protuberance, prominence, front, and sometimes “forehead” although “forehead” is usually “éadan”).  This could also be translated as “the grassy hummock” or “the grassy mound,” both of which would also be reasonable descriptions.

b) an cnocán féarmhar: “cnocán” comes from “cnoc” (hill, also used for “berg” as in “cnoc oighir,” iceberg).  Cnocán can also mean a “heap,” not quite as applicable to the Grassy Knoll in Dealey Plaza.

Of these three, I would advocate “tulán,” mainly because it doesn’t bring up so many other possibilities.  Cad é do bharúilse?

I have Googled these terms to see if there’s already a precedence for which one to use, but I don’t see anything suggesting a preference.

As for the “magic bullet,” I’d say the terminology is more straightforward.  Generally the word “magic” is translated as “draíocht,” and there are many examples: slat draíochta (magic wand), ceo draíochta (magic mist or fog), and “cochall draíochta” (magic cloak).  “Draíocht” can also mean “druidism,” and is derived from the word “draoi” (druid).

So “magic bullet” would be “piléar draíochta.”  Did you notice that “-a” ending?  That’s what makes the word mean “of magic,” as opposed to “magic” on its own.

Bhuel, that’s just the tip of the “cnoc oighir,” of thoughts regarding feallmharú Kennedy.  Shortly I’ll be writing more about “a mhuintir” and “a shinsir,” and also about some Irish aspects of his funeral.  Scríofa go brónach, Róislín