Cén sórt rothair é seo? Irish words for types of bicycles Posted by róislín on May 27, 2018 in Irish Language 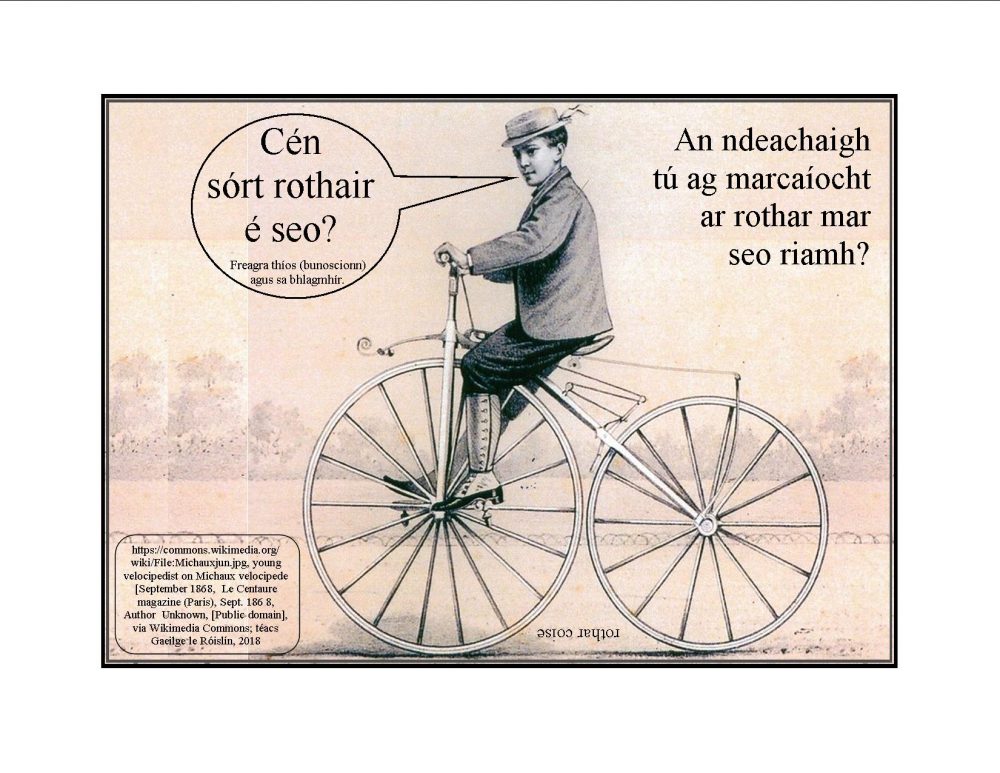 In keeping with our recent thread on bicycles, including a brief discussion of the globe-trotting bicycle “Rozinante” (owned by _____? freagra thíos),  here’s a matching game for types of bicycles.  An aithníonn iad go léir?  Freagraí thíos, mar is gnáth.

Note that in at least one case there are two different Irish phrases for one English phrase.  And one extra word is given in the Irish column just to add to the dúshlán (challenge; remember for pronunciation, the “s” is silent).   The answer for that is given in the notes, but not in the text box.

Before I sign off, just curious if any of you have  ridden a velocipede or any other unusual or vintage bicycle?  If so, perhaps you could write in and tell us, i nGaeilge más féidir (Chuaigh mé ag marcaíocht ar ____; Bhí mé ag rothaíocht ar ____, srl.).  Slán go fóill – Róislín

1., rothar comhrá, side-by-side bicycle.  This might have been even better for “Daisy” (of Tin Pan Alley fame) than a standard “tandem” bicycle.

4., rothar leictreach, motorized (or electric or e- or power-assisted)

5., rothar coise, velocipede, lit. a “foot bicycle,” an interesting term, since, as far as I know, there are no “hand bicycles.”  I’m no bicycle technician but I imagine this term is based on the fact the feet and pedals appear to be centered on the hub (an mol, i nGaeilge, an cuimhin leat?) instead of having a chain and the pedals between the front and back wheels.

10., *rothar faoilí, a wheelie bike  — OK, I sort of made up this term, since I couldn’t find it in any dictionary.  If we created a term for “wheelie bike” based on the Irish for “wheelie bin,” it would be a bit redundant, perhaps to the point of absurdity.  The Irish terms for “wheelie bin” simply add “rothaí” (of wheels) or “ar rothaí” (on wheels): araid rothaí or bosca bruscair ar rothaí, so we’d have …  ” rothar rothaí ” or “rothar ar rothaí” — neither of which is a very graceful a term, i mo bharúil féin.  So I propose “rothar faoilí,” using the existing word “faoilí,” found in phrases like the following: “Ghearr sé faoilí,” “Chaith sé faoilí,” and “Rinne sé faoilí,”  all of which mean, “He popped a wheelie.”

And a final note, speaking of terms that I can’t find documented in Irish, here are a few more.  Barúlacha ag duine ar bith ar an liosta seo — an bhfuil téarma Gaeilge orthu?

banana bike – I love the idea of saying “rothar banana” but am not sure it’s ever actually used.  No Google hits, anyway.

penny-farthing – the Irish for “penny” and “farthing” is clear enough (pingin agus feoirling), but I haven’t been able to determine if this is actually used for the old-fashioned bicycles.

quadricycle – possibly “ceathair-rothach” or “ceithrerothach,” but I found no hits online for either term as a noun for the cycle itself.  But “quadricycle” could also mean “a bicycle for four people,” so perhaps “rothar ceathrair“?  Can we use the adjective “ceathair-rothach” (four-wheeled) as a noun for a four-wheeled bicycle?  I suppose so, since ‘trírothach” can mean either “tricycle” or “three-wheeled.”

octocycle or octo-bike – presumably “ochtrothach,” but also no hits online for this term .  Or perhaps “rothar ochtair” (a bicycle for eight people).  The English term  “octo-bike,” though predictable, technically should have 10 (or perhaps 16, depending on your viewpoint) wheels, since the “bi-” already means “two.”  So “octocycle” seems more accurate.  But we don’t want to split hairs, do we?