Oiriúintí Rothair – Irish Terms for Some Bicycle Accessories Posted by róislín on May 29, 2018 in Irish Language 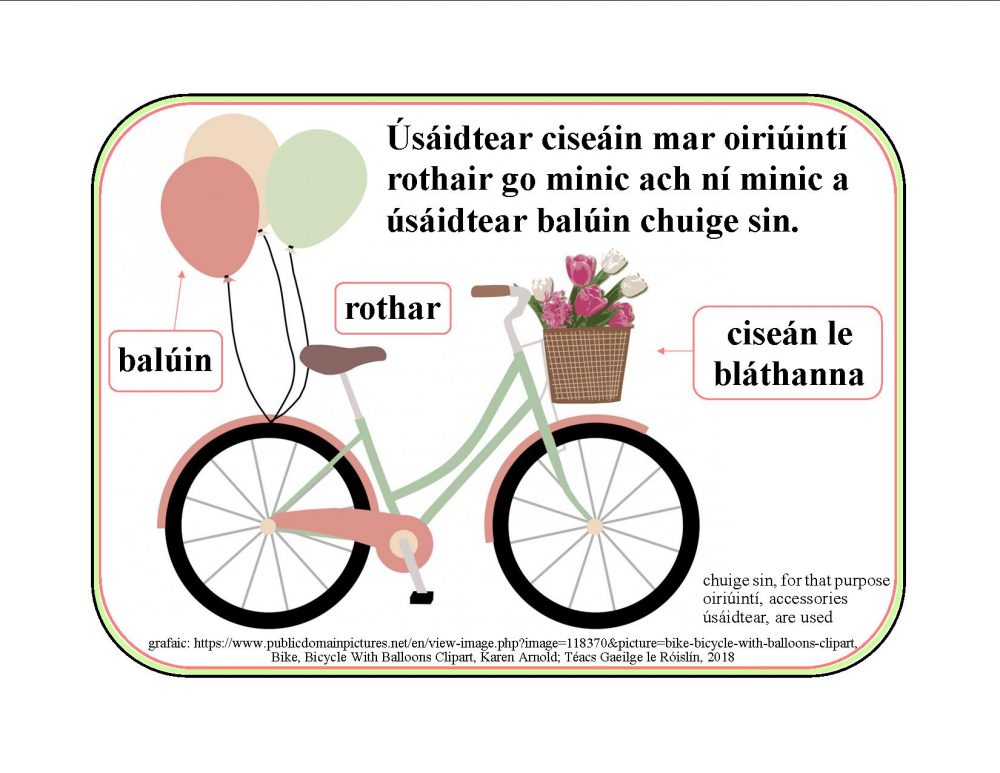 From the decorative (tassels or streamers) to the practical (puncture repair kit), let’s look at some Irish words for bicycle accessories, continuing the téama rothaíochta we’ve been working on for the last few posts (naisc thíos).  As you can see, the words are presented as a little matching game.

Seo na téarmaí, le ceann breise le haghaidh an dúshláin.  Here are the terms, with one extra for the challenge.

By the way, if you’re quite new to Irish, you may not have learned “roth” yet, but it means “wheel” and is the basis for rothar, rothaíocht, rothlaigh (rotate), rothlach (rotary), rothlúchán (rotation), and many related compound words or phrases (such as rothmhol, rothdhiosca, inneall rothlach, roth criadóra, rothán loine, which mean, in sequence,  “water-mill wheel,” “wheel-disc,” “rotary engine,” “potter’s wheel,” and, my favorite, “perforated cup of a churn-dash” — an-úsáideach inniu!).  In some future blog, we’ll look at an alternate word for “bicycle,” which is not based on “roth” at all, but which is simply a gaelicization of the sound of the English word – badhsacal.  Remember the “-adh” is basically like an English “long i” sound, as in “bite” or “kite.”

It would be great to hear from any cyclists if this has been useful.

8., bobailín, tassel (3), also means a “bobble,” as on a hat, usually woolen, and can also mean “a tuft” or a “pompom,” although the latter is usually “pompom” these days.

and the “ceann breise,” which was “puncture repair kit,” is “fearas deisithe poill” (lit. kit of repairing of hole) .

“Oiriúintí” is an interesting word in and of itself.  In the singular, it can mean “suitability” or “fittingness” and as a verbal noun, “suiting,” “fitting” or “becoming.”   In the plural it can mean “accessories,” as used here, or “fittings” as in “oiriúintí práis” (brass fittings)