Rothar vs. Rothair agus Badhsacal vs. Badhsacail (Irish words for ‘bicycle’) Posted by róislín on May 31, 2018 in Irish Language 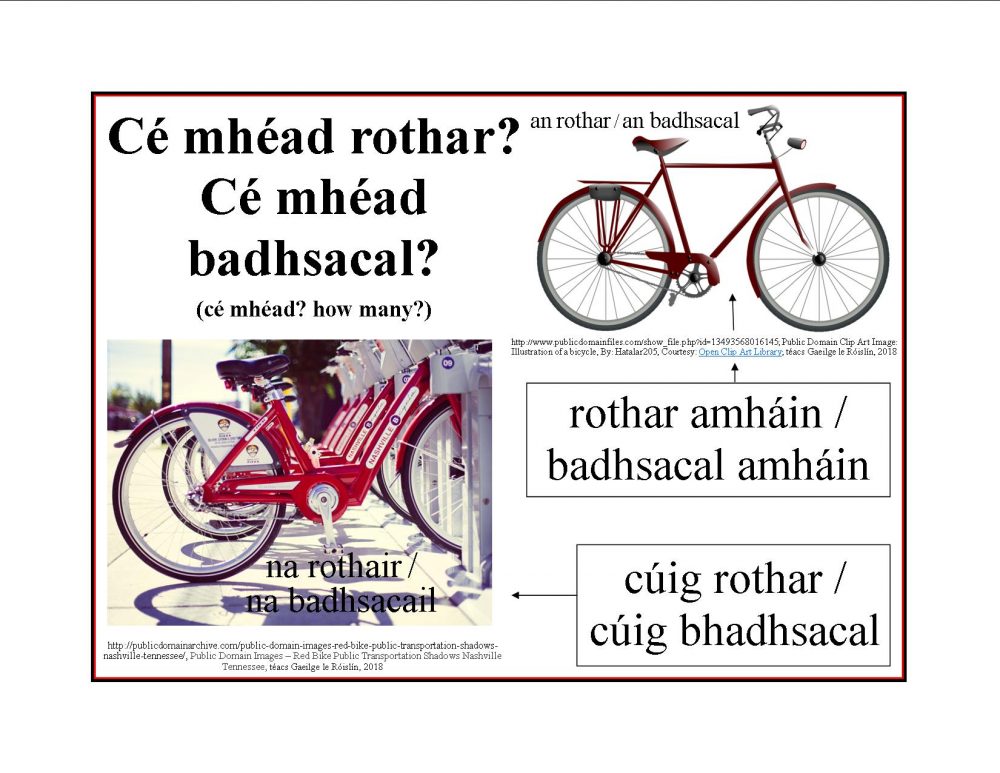 There are a few final points about bicycles that I’d like to mention before we wrap up this discussion, at least for the time being.  So we’ll briefly discuss:

Many of you probably recognize that “rothar” (an rothar) is singular and “rothair” is plural (na rothair).  This is true when the bicycle is the subject of the sentence (e.g. Tá rothar agam) or the direct object (Cheannaigh mé rothair do na páistí) or the object of a preposition (Cén dath atá ar an rothar?  Cén dath atá ar na rothair?)

So the pattern is:

If this seems strange, just think of the word “fear” (man) for the basic pattern:

Our next point is “rothar” vs. “badhsacal.”  First,  let me say that it was years before I actually saw the spelling “badhsacal” in print.  I’ve yet to find “badhsacal” in any major dictionary.  If you find it, please do let me know.   “Badhsacal” is a gaelicization of “bicycle” and this word is very widely used in the Gaeltacht.  However, every phrase I’ve seen in print that describes parts of bicycles or regulations or signage about bicycles uses “rothar” (or “rothair“), not a   form of “badhsacal” (e.g. slabhra rothair, lána rothar).

There are a few spelling variations for “badhsacal,” such as “badhsalaic” and “badhsacail” (with -ail for the singular), and I’ve heard what sounds more like “baidhseacal” although I’ve yet to see it in writing in Irish in a natural context.

And finally, “badhsacal” vs. “badhsacail” — simply a matter of singular (badhsacal) vs. plural (badhsacail).  So, “an badhsacal” but “na badhsacail.”  If we go with that variant “badhsacail” as the singular, I have to say I’ve never seen a plural, but assume it would be “*badhsacailí,” or maybe “*badhsaiclí.”

As for the questions in the graphic (Cé mhéad rothar? Cé mhéad badhsacal?).   Why “rothar” and not “rothair,” since the question is plural in English (How many bicycles?).  The answer is that the English structure has no bearing whatsoever on the Irish, and there’s no reason why it should, since they’re two different languages from two different language families (Irish/Celtic but English/Germanic).  Similarly, for the alternate vocabulary word, the question “how many” uses “badhsacal,” not a plural form.

And now for the answers to the questions in the graphic.  For the singular: rothar amháin, with the singular ending “-ar.” BUT we also have “cúig rothar” (five bicycles), since nouns usually stay singular in Irish, after numbers (dhá chat, trí chat, céad cat — although the plural of “cat” is “cait,” as in “na cait“).  So “rothar” doesn’t change after a number.  Strange, perhaps, but true.

Anyway, that’s a bit more for the cyclist out there, and who knows, maybe Dervla Murphy, whose cycling trips inspired this mini-series on bicycles, is perhaps reading it herself, or reading it to “Rozinante.”  Slán go fóill — Róislín