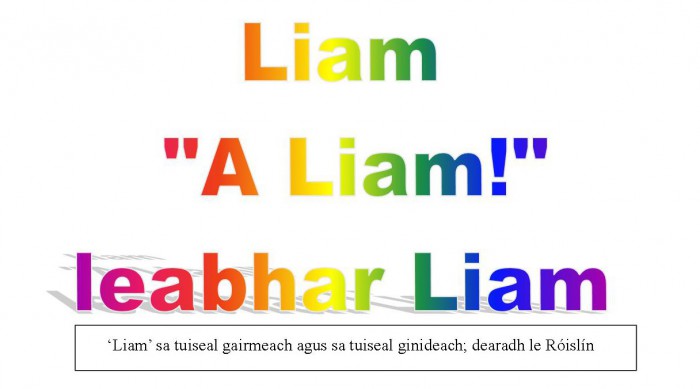 The good news for the name “Liam” is that there are no spelling changes with this word (i.e. no inserted “h’s” or “i’s”).  So the forms are, quite straightforwardly:

Liam [LyEE-um], equivalent to “William,” also used when the name or nickname (leasainm) is “Bill” or “Will.”

direct address form / vocative case: “A Liam!” [uh LyEE-um].  “Luigh ar an leaba, a Liam!” (giving a nice workout of the broad “l” and the slender “l”).  There’s no spelling change to the name “Liam,” but there are some speakers who pronounce a lenited slender “l,” even though they don’t write it (no one writes it in Irish).  It’s basically extra slender and it’s not readily transcribable in my rough pronunciation guide.  This phenomenon has been described as largely among “older speakers” since I first read of it in the 1980s, so you may not hear the slight difference in everyday speech.

Hmm, I’m tempted to add “liom” to my example above.  “Luigh ar an leaba liom, a Liam!”  Gives it a slightly different slant, doesn’t it?

Of course, we could nip any implications in the bud and vary it further, “Luigh ar an leaba liom agus léigh leabhar liom, a Liam!” (Lie on the bed with me and read a book with me, Liam!).

And now for a name which not only goes through changes for the direct address and possessive forms, but also has at least one widely-used variation and one other variation that is, i mo thaithí féin, not particularly common.

direct address form / vocative case: “A Mhíchíl!” [uh VEE-hyeel].  “Dia dhuit, a Mhíchíl!”  Notice that the “-eá-” vowel cluster has completely disappeared and is replaced by a long “i” (Í).

And there’s actually yet another variation but I can’t say I’ve seen it written very much:

Mhaidhcil: a possessive form, doesn’t show up real often, i mo thaithí féin, but there are some references, like the name “Máirtín Mhaidhcil Ó Cadhain” (http://aransongs.blogspot.com/2014_06_01_archive.html) or Cóilín Mhaidhcil Úna, which was the community name of the late Cóilín Ó Domhnail [sic per anghaeltacht.net], of Tír an Fhia, who had been “fear an phoist” for 40 years prior to his death in 2005 (http://anghaeltacht.net/ce/cartlann/0130.html).

I get a slight indication from online examples that the name is sometimes just “Maidhcil” throughout (not with the “-eá-” form), and in that case the only changes would be for the lenition (“A Mhaidhcil!” and “Mhaidhcil“).

If anyone else has some more examples, or knows more about the usage of “Maidhceal / Mhaidhcil,” please do write in and let us know.

And then there’s the nickname:

Bhuel … and btw, I use the word “bhuel,” like, a lot, you know, ‘cuz at least it sounds a little more “bhuelifluous” than loading up the text with “likes” and “you knows,” in my attempt to keep the blog sounding a bit “chatty” and not overly grammar-driven.  And you’ve been pronouncing that “bhuel”  like the English word “well,” haven’t you?  The “bh” is a “w” sound — remember, the letter “w” itself is very very rarely used in Irish, as we recently discussed and as we saw in today’s blogpost, where the “mh” has a “w” sound.  And the “ue” is almost unique in Irish, and not pronounced like English “gruel” or “fuel.”  The “u” keeps the “bh” broad and the vowel sound is essentially the short “e,” as in “well” or “bell” or the Irish “eile.” So, bhuel, á, sin é don bhlagmhír seo.  Céard a dhéanfaidh mé ina dhiaidh seo?  Níos mó ainmneacha?  Ábhar eile ar fad?  Moltaí?  Pé scéal é — SGF — Róislín