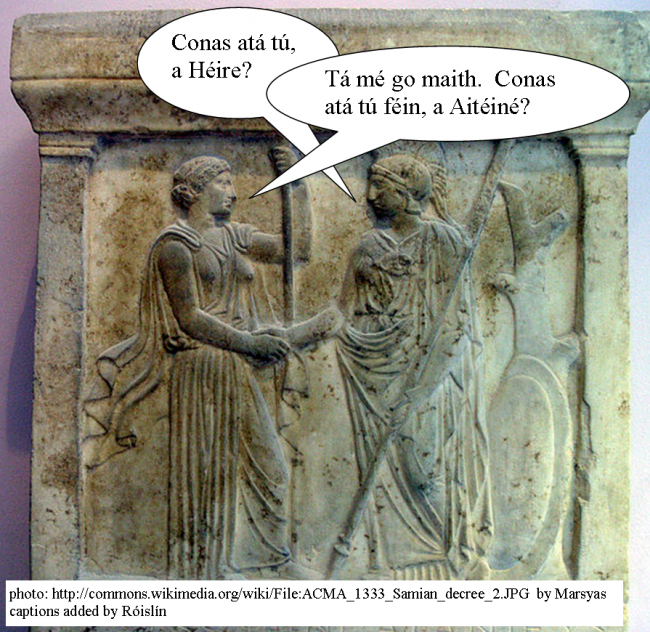 Some of you may have seen the recent article “Did you know there are 100 ways to say ‘How are you?’ as Gaeilge?” in The Daily Edge, based on a dialect map posted on Twitter (naisc thíos).

As comments to the Daily Edge article pointed out, about half of the examples are from Scotland, so they’re in “Gàidhlig,” not in Irish (Gaeilge), and another four are in Manx (Gaelg).  But leaving that argument aside, there still are about 50 interesting examples for Ireland.  Some of the entries are almost identical, except for slight spelling or punctuation issues (like “Goidé mar atá tú?” vs. “Goidé mar ‘tá tú?”).

For today’s blog, let’s just look at the top 5 most common ways to say “How are you?” in Irish (de réir mo thaithí féin, ar ndóigh, ach sílim go bhfuil mo thaithí samplach go leor).  Eventually, I hope to look further into some of the less typical forms.

1) The one that is probably taught the most is:

Conas atá tú?, which is, quite literally, “How are you?”

2) The typical Conamara version is:

Cén chaoi a bhfuil tú?, lit. “What way are you?”  And here are some pronunciation tips:

3) In Donegal and among Irish speakers in Northern Ireland, you usually hear:

Cad é mar atá tú?, very very literally, “what-as are you?” — not that anyone really translates it as such.  “Cad é mar” usually translates to “how?”   This phrase is often, and quite traditionally spelled “Goidé mar atá tú?,” since “goidé” is a typical Northern form of “cad é,” as in “Goidé ‘tá cearr leat?” or “Goidé a chonaic Fionn agus na Fianna rompu ach teach beag bídeach agus solas amháin san fhuinneog?”

“Cad é” and “Goidé” sound very similar in Northern Irish, since the broad “d” of “cad” becomes slender, adding a “j” sound, as in “judge,” when it comes before a slender vowel like “é.”  Remember, “cad” itself is normally pronounced more like “kahd,” not like “cad” in English (as in “an ill-bred person”)

So while, the “Cad é mar” and “Goidé mar” versions may count as two entries in the list of 100, they’re basically the same core idea, as opposed to phrases with really different vocabulary, such as “Cad é an dóigh atá ort?,” lit. “What is the way that is on you?” or “Cad é ‘n gléas atá ort?,” lit. “What is the order / arrangement / means / outfit that is on you?”  None of those definitions for “gléas” really work that well in English, but hopefully the idea comes through.

And finally, the two variants that I’ve heard most, aside from the ones above, and they’re both Munster Irish (southwestern)

4) Conas atánn tú?  Interesting because it includes the “-nn” ending that is used for most Irish present tense verb endings except, in standard Irish, for “tá.”  Typical uses of the “-nn” ending are “ólann,” “itheann,” “déanann,” etc.  The “atánn” form can also occur with lenition as in “Conas athánn tú?”

5) Conas ataoi?  Interesting because it uses a built-in pronoun ending, instead of the actual word “tú.”  These built-in forms are referred to as “synthetic” endings in Irish, and were at one time a more prominent feature of the language.

So, sin iad na príomhleaganacha, i mo bharúil féin, ar a laghad.  Cad a shíleann tusa?  Of all the forms on the map, which one(s) do you use the most?  And does anyone here speak Scottish Gaelic or Manx?  If so, what your top choice for those?

Perhaps for some of you, the New Year’s resolution (rún athbhliana) is to speak more Irish.  Hopefully, one of these phrases will help with the “caint” and the “comhrá.”  Slán go fóill agus athbhliain faoi shéan agus faoi mhaise duit — Róislín

an léarscáil: https://twitter.com/coistenabhfocal/status/549283529818116096.  The article includes an email address for obtaining a “leagan ardchaighdeáin” of the map by Ciarán Dunbar.

Nasc eile d’alt i Spáinnis (!) faoin teanga Gaeilge go ginearálta le píosa beag faoi dhóigheanna le “How are you?” a rá: http://1globaltranslators.blogspot.com/2013/11/el-irlandes-en-defensa-de-la-lengua.html.  Gotta love the picture of what must be hand-knit leprechaun booties.  Not that that has anything to do with “How are you?” but it’s a great photo!