How to Say ‘Multilingual Madness’ in Irish (Cuid 1/2) Posted by róislín on Apr 2, 2014 in Irish Language 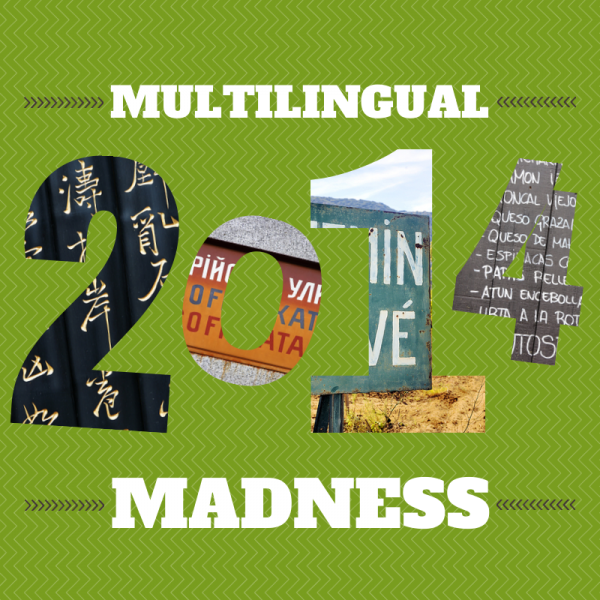 Lately we’ve seen a lot of posts about “Multilingual Madness” on Transparent Language websites (nasc thíos).  So let’s take a look at the phrase in Irish.  How do we say “multilingual”?  With some trepidation, we’ll also discuss how to say “madness” (there’ll be a lot of choices  — at least 9, depending on what you mean by “madness”!).   We’ll also see if any of the combinations have the alliterative catchiness of the English phrase.

Let’s start with “multilingual,” and in passing, we’ll look at the prefix “multi-” in general and also at a few other words based on “lingua” (Latin for “tongue” or “language”).

Here’s one point of interest, for starters.  I’ve just looked at a couple of dictionaries for both Irish and English that happen to date from 1927 to 1970, and the word “multilingual” isn’t in them.  Hmm, browsing the assortment of hard-copy “foclóirí” that adorn my desk, I see that “multilingual”  is also not an entry in the dictionaries that I have for the following languages: Scottish Gaelic (1925/1991); Welsh (1982/1993), and going farther afield, geographically, Finnish (2002), Italian (1957/1981), Portuguese (1986/1993), and Ladino (2000). None of which is say that the word “multilingual” wasn’t available in those decades or in those languages, but its absence from dictionaries suggests that it wasn’t much in everyday usage.   By way of background, none of the dictionaries I checked were “phrase book” types (usually very small and short) , but they  were all one volume, reasonably comprehensive, with typically 30,000 to 100,100 entries.

My hunch is that if a medium-sized dictionary like these included a word like “bilingual,” which many did, the publishers assumed that users could figure out “multilingual” reasonably readily (fair enough!).  And that would basically be true for Irish also.  The root “-teangach / -theangach” can be used to create various compounds.

As for the history of the term in Irish, I can find “dátheangach” (bilingual) going back to 1904.  But “multilingual” seems to mostly show up in basic Irish sources from about the 1980s onwards.  Eventually I’ll check in some even earlier dictionaries, now that the question has arisen.  But for now, this brief investigation gives us at least a general impression of the situation.

So how do we say “multilingual” in Irish?  There are two main choices, the first of which is by far more prevalent (if we can judge anything by “amais Google” and “taithí phearsanta“):

“ilbhéarlach” — 4,890, which boils down to about 23 considered “relevant.”  A number of these are simply dictionary entries, which are interesting to note but which don’t shed much insight into typical ways the word is used.   A few out of these 23 do really use the word in context, and interestingly, these writers seem to be very fluent and to use “ilbhéarlach” deliberately instead of “ilteangach” for extra emphasis or effect.   Adding the plural form to the search yields a grand total of 5 more hits, of which only one really has a context other than being in a database.

It looks like the “madness” part of this discussion will have to wait until “an chéad bhlag eile,” but meanwhile, let’s look briefly at the prefix (multi-) itself and the word “teanga.”

The prefix typically used today for “multi-” is “il-” and it may also be translated as “poly-” or shifted to the typical adjective role and translated as “many,” “diverse,” “varied,” etc.   A few more examples include “ilathraiteach” (kaleidoscopic) and “ilvóta“(plural vote).  Why these two for examples?   I was actually trying to find “il-” attached to nouns from “A” to “Z” but only found examples up through “v” since so few words in Irish begin with “z.”

A few more examples that would be fairly widely used would be:

In the handful of examples where “il-” is followed by a word beginning with “l,” the hyphen is used:

il-leibhéil, multi-level (used as an adjective)

As for “teanga” (tongue, language), its forms are:

an teanga, the tongue, the language

na teanga (or the variant: na teangan), of the language, of the tongue

na teangacha, the tongues, the languages

na dteangacha, of the tongues, of the languages

Some related words include:

“teangach” and “teangúil” can both mean “lingual” but note that “-teangach” is the one that becomes the root of words like “dátheangach” and “ilteangach.”  Note that there is séimhiú after “dá-” (two), resulting in “-theangach” instead of “teangach.”

A “tongue depressor” is “spadal teanga,” lit. “a spatula of tongue.”

And finally, one for your “rang luibheolaíochta,” a “ligule” is a “teangóg” (lit. a “little tongue,” paralleling the English word, which comes from Latin “ligula,” a shoe-strap, as opposed to Latin “lingula,” a tongue of land)

Bhuel, we’ll have to take up the “madness” part of the phrase “Multilingual Madness” next time.  Likewise the question of alliteration.  Meanwhile, you’ll become níos dátheangaí agus níos dátheangaí fós the more you work on Irish.  Or maybe for some of you, it’s “trítheangach” or “ceithretheangach.”  Nó níos mó?  Please write in and let us know if you’re learning Irish as a 2nd language, or 3rd, or 4th or 5th.  Or maybe, like Benny Lewis (nasc thíos) , it’s your umpteenth?

Oh, and did I nearly forget?  “Pressed ox tongue” would be “damhtheanga bhrúite,” logically enough (damh = ox) and “teanga” is used for the tongue of a shoe or a jaw-harp and for the clapper of a bell.  SGF–Róislín