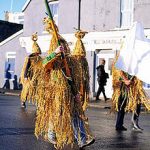 Wren Day has become increasingly well-known outside of Ireland, ever since the Clancy Brothers recorded “The Wran (i.e. Wren) Song” in 1955.  Groups as diverse as Steeleye Span and the Chieftains have added to the musical legacy of the wren festivities.  Well, festive for everyone except an dreoilín.  Ar an dea-uair, the wrens in today’s processions are either artificial or symbolic, but the original custom did include actual wrens.  I think, though, that we need to look at the practice of hunting a live wren in the context of the times.  In an era when rural dwellers constantly dealt with the life-cycle of animals and the realities of the food chain, it probably didn’t seem as disconcerting.  And if the custom is as old as it appears to be, perhaps pre-Christian, we could look at a lot of other life-and-death situations of the times and wonder why life was taken so casually.  But suffice it to say here that in those days, the notion of quarry stretched far beyond wrens.

As many of you know, the basic wren procession involved men and boys in handmade costumes, usually of straw (“strawboys”).  The Irish name for the strawboys, however, doesn’t refer to straw, which would be “tuí” or “cochán” or “sop.”  It’s “cleamairí,” which could also be translated as “rompers” or “mummers.”  Nowadays, women and girls may participate.  The group is sometimes called “lucht an dreoilín” (“wren-boys,” lit. the wren “crowd”).  They sang and played music, especially on easily portable instruments like the orgán béil and the bodhrán, and proceeded from house to house in their local community, performing and asking for money.  The wren was displayed, often on a miniature beribboned funeral bier.  The word “dreoilín” is probably one of the most widely recognized Irish words, even in English speaking communities.  It’s sometimes anglicized as “droleen” and most versions of the “Wran Song” that I’ve heard use both terms at different points in the lyrics: “The wren, the wren, the king of the birds” and “Droleen, droleen, where’s your nest?”

“Droleen,” as an anglicized Irish word, has its own interesting history.  Droleen II is a 33.6 ft. yacht built in 1945.  The British Classic Yacht Club description of it gives no hint as to why it was called Droleen II.  Or what happened to Droleen I?  If there’s a luamhaire or díograiseoir luamh reading this, you’ll find the mionrudaí on Droleen II at http://www.britishclassicyachtclub.org/register/Droleen.htm.  Hmmm, ainmneacha bád in Irish in general, even in anglicized Irish, now there’s a topic in itself!  The British Classic Yacht Club also lists Talisker Mhor, Corrie, Huff of Arklow (huff?!), Kelpie, Rinamara (Rí na Mara?), Cuilanaun, and Ceilidh Mhor.  Lots of food for thought there!  “Droleen” also occurs as a name for dogs (Milton Droleen, an Irish Terrier aka “the American Erin” – whereby must hang a tail/tale!) and horses (Cnoc na Droleen, not grammatically correct but c’est la vie, and Glencairn Droleen; for the grammatical analysis of “Cnoc na Droleen,” see below).  There is also the Droleen Cup (Bray Sailing Club) but I can’t find any background to that – thereto must hang a sail, or a scéal, but níl na mionrudaí agam.

But what about the word “dreoilín” itself?  Cén díochlaonadh?  An bhfuil ciall ar bith eile leis?

“Dreoilín” is a fourth-declension masculine noun, with the familiar “-ín” suffix, used for diminutives.

All the forms of this noun are fairly straightforward:

Various related words also suggest silliness!  For example, “dreoileachán” can mean “a little wren” or “a silly wretch.”  And “dreolán” can either be an alternate spelling of “dreoilín” or yet another word for “a silly person,” for which Irish already has a rich vocabulary, including “glagaire,” “pleidhce,” and the intriguing “leathamadán,” a silly person, lit. a “half-fool,” presumably in contrast to a full-fledged “amadán” (fool).

Ornithologically speaking, it’s quite interesting that the wren is so celebrated, if infamously, in Irish tradition.  Apparently, there are about 80 species of wrens, but only one of these is native to the Old World, the Eurasian wren.  Although all the species are small in size, they are known for having disproportionately loud and complex songs.  Perhaps that contributed to the notion of the wren as a betrayer, revealing the hiding place either of San Stiofán, when he was i bhfolach, or of saighdiúirí Éireannacha, who were then attacked by Uigingigh.  Which reminds us of the original theme of the day and why the wren is singled out for the strawboys’ attention.  The San Stiofán connection, of course, leads us back to the alternate name for this day, Lá Fhéile Stiofáin (St. Stephen’s Day), which is also alluded to in “The Wran Song”: “… on St. Stephen’s Day, he was caught in the furze.”  And that may suggest another ábhar blag for the future — “whin” do we say “furze,” and “whin” do we say “gorse,” and “whin” to we say “whin”?  And how does “aiteann” connect to all of those?  Ach sin ábhar blag eile, ar ndóigh.  SGF, Róislín

Nóta gramadaí faoin bhfrása “Cnoc na Droleen”: the word “na” would be used either if “dreoilín” were grammatically feminine (which it isn’t) or if it were plural, in which case it would have the “-í” ending.  “Cnoc” is “hill,” so to say “the hill of the wren,” it would be “Cnoc an Dreoilín.”  That could anglicized as “Cnoc an Droleen” (not “na Droleen”).  If we want to retain the “na,” the word for “wren” would have to become plural and it would take eclipsis (“d” changing to “nd”), which would probably end up anglicized as “Cnoc nan roleenee.”  And that looks to me like a situation where all three words would be run together, creating “Cnocnanroleenee.” Which barely looks like even anglicized Irish to me, but sin scéal eile.  It would mean “the hill of the wrens,” at any rate.  The original “d” of “dreoilíní” would have become silent, since it was “eclipsed.”

In fact “Cnoc na Droleen” is another example of hybridization when Irish words are used in an English-language context.  “Cnoc” is the actual Irish spelling of the word for “hill” and is often, if oddly, anglicized as “Knock” (as in Knockmany, Knockmealdown, or simply Knock, Co. Mayo, the shrine site).  Why do I say “odd”?  Because in Irish the initial “c” is pronounced like a “k” [cnoc, “knuk”], but we have to understand the initial “k” as silent in the English version [knock, “nahk”].  Anyway, one might think that if “dreoilín” is going to be anglicized to “droleen,” then “cnoc” would be also, giving us “Knock an droleen.”  But it isn’t, so once again, c’est la vie.  Ag an ainmneoir an t-ainm, is dócha, which roughly means, “to the namer (belongs) the name.”  I wonder what the horse would have to say about it, dá mbeadh caint aige!