Before getting back to the question of the shot glass vs. the “timbléar fuisce,” I thought I’d look a little further into the words for mud, mire, muck and the like, as mentioned in the last blog.  Whether you decide to use any of these for an cuspa sláinte traidisiúnta Béarla (Here’s mud in your eye!) will remain “suas leat.”  Here’s the recap, with a little more background, and a few more entries. 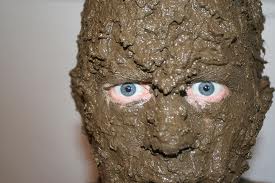 Seo pictiúr a fuair mé ag http://www.flickr.com/photos/clearly ambiguous/1280631800/lightbox/.  Deir an grianghrafadóir, Scott Robinson: “No mud in my eyes, but I’m still getting it out of my ears”

Bogach (variation “boglach”), soft boggy ground, mire (cf. “bog” soft).  The most generic word for a bog, though, is “portach,” which will no doubt be ábhar blag eile, lá eile (Beidh lá eile ag an bportach!)

Dóib, sticky mud, daub (as in wattle and daub), plaster-clay

Slab or slaba [pronounced with an “ah” sound, not like English “slab” (of marble, etc.)], mud, mud on the seashore, slob as a type of mud, ooze, mire; also a “slovenly person” or “slob.  So, an Irish origin for “a slob”!  But then there’s also the Danish “slab” (mire) and Icelandic “slabb” (slush).  Of course, those could all be related, given the history.  And somehow, this must also account for “slob ice” (slushy or sludgy ice floating in the sea).

Hmm, seeing the “slob/ooze/mud” connection sends me back on the hunt for more related words, or more meanings per word.  So I see that clábar and puiteach can also mean “slob” and, just to round things out, they can also mean “slop” (as opposed to “slops”). Now, for the exact quality of láib that disqualifies it from meaning “slob” but allows it to mean “slop,” I’m really not sure.  Maybe it’s just a lexicographical quirk.

In real life, “láib” and “clábar” are the words out of all of these that I’ve heard and used most.  I’m not sure I’ve had much reason to discuss seashore mud or the friability of earth, but there’s always a first time.  Cad fúibhse?  Ábhar cainte daoibhse iad seo?

One word that should provide a backdrop to all of this, though not necessarily muddy, mucky, or miry as such, is “ithir” (soil, earth).  This gives some more compound words pertaining to soil, like “ithirmhapa” ([IH-hirzh-WAH-puh], soil map) and “ithirthorthúlacht” ([IH-hirzh-HOR-hoo-lukht], soil fertility).

And that has led me to note two more words for “soil scientist,” “ithireolaí” and “eolaí ithreach,” besides the one mentioned in the previous blog (peideolaí).  A quick comparison to “peideolaí” online, using amais Google:  ithireolaí (0 amas), peideolaí (2 amas, both from the most recent blog in this series!), and eolaí ithreach (2 amas, both referring to Dr. David Wall in the publication Teagasc: Agricultural and Food Development Authority (www.teagasc.ie).  “Teagasc” means “teaching” and this organization has a leagan Gaeilge for a good chunk of its web site <bualadh bos!> and the nasc for that is, logically enough, http://www.teagasc.ie/gaeilge/.  So, while a cuardach Google is never bun agus barr an scéil in matters like this, it is one perspective.  Here it seems to tell us that soil science is not being widely discussed in Irish online, at least not in a way that a)  is easily Googleable and b) makes use of the occupational terms.  Sin mar atá.

I’ve only ever met one soil scientist, fód, úúps, fad m’eolais, and she was Welsh, not Irish, otherwise I’d check with her on some of these matters.  I’m sure she’d be an expert on the equivalent Welsh terminology.  I suppose there must be some technical distinctions between boggy ground (decaying vegetable matter, on its way to becoming gual) and regular mud (earth and water).  “Mire” I see defined as “wet swampy ground” and also as “deep mud.”  And what exactly is “muck”?  One definition I see puts it concisely as “dung in a moist state” (!) and defines it as “aoileach” in Irish, accurately enough, but that wouldn’t really seem to account for the frequent overlap with “mud” and “mire.”  Discussing “aoileach” would certainly take at least another full blag, so that’s a project for another day.  At any rate, there seems to be a lot of overlap in the Irish terms, which is often the case, and context is usually the best way to sort out the differences, if indeed they can be sorted out.  Or, if you can find some ithireolaithe (aka eolaithe ithreach or peideolaithe) who also speak Irish, cuir ceist orthu.

And then there’s “mudlark,” an English “mud” word that doesn’t involve mud at all in the Irish.  There could be implied mud, since it refers to streetlife, probably before paving and sewers, but not to the extreme that you might find in the countryside.  So the Irish for a “mudlark” is “smugachán sráide,” lit. a snotty-nosed child of the street.

As for slinging the figurative mud, there are so many phrases for that that I’ll wait for another blog to discuss that topic.

So that’s it for now for “mud” and its cohorts.  Maybe sometime in the future, I’ll do a “Maidir le “Mudd” blog, as an entrée into a further discussion of RéaltAistear (Star Trek) in Irish.  But for now, Harcourt Fenton Mudd agus a phláinéad will have to wait, while we keep our feet firmly planted on the talamh, fód, or ithir.  Hopefully said cosa will not be báite sa láib.

Did I say that’d be it for now?  Well, I just discovered that 29 Mí an Mheithimh will be the second annual International Mud Day, so perhaps we’ll revisit the topic at that time.  As far as I can tell, the event was initiated by the Nature Action Collaborative for Children (http://worldforumfoundation.org/wf/wp/initiatives/nature-action-collaborative-for-children/international-mud-day-2011/mud-day-logo/).  Meanwhile, up next, cineálacha gloiní i nGaeilge, an timbléar fuisce ina measc.  SGF, Róislín