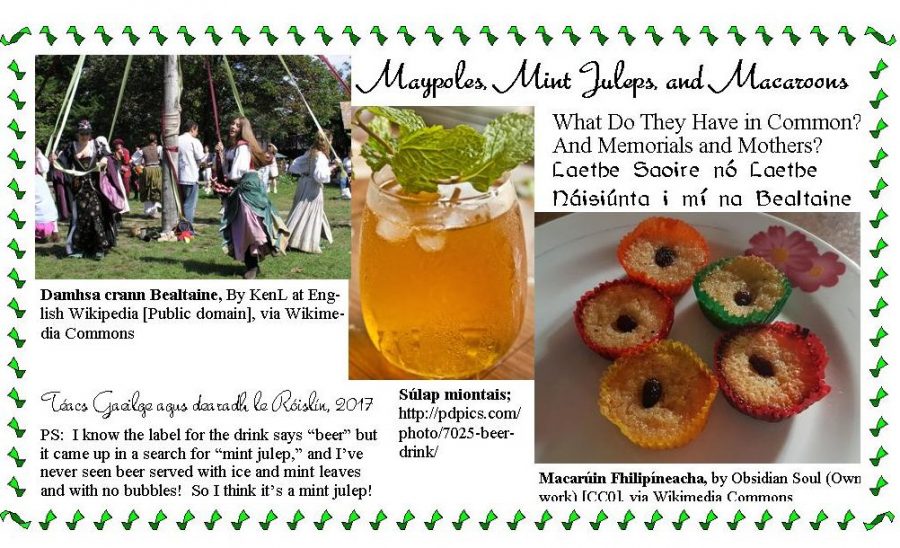 OK, so what do all those words in the title have in common besides, starting with the letter “M” in English?  Well, May, Mothers and Memorial (in the U,S.) are a shoo-in — holidays (laethe saoire) during the month of May (mí na Bealtaine).  So are Macaroons and Mint Juleps.  Maybe I should clarify the latter a little bit — they are on that sometimes mind-boggling list of “National Days,” which includes foods (Buttermilk Biscuit Day), activities (Talk Like a Pirate Day), people (School Librarian Day), and material objects other than food (Tweed Day).  Personally, I’ve never celebrated National Macaroon Day or National Mint Julep Day.  But they all give us a nice chance to practice some Irish vocabulary!

Here’s a selection of days for May, starting with the day, and indicating if the date changes from year to year (adding 2017 for Mother’s Day and Memorial Day):

1 Mí na Bealtaine:  Lá Bealtaine. May Day, lit. Day of May, i.e. May 1st. There are umpteen possible topics here, ranging from damhsaí crann Bealtaine and/or the dance specifically entitled “Aoibhneas na Bealtaine” (which is not a “damhsa crann Bealtaine“) to cuileanna Bealtaine and the great and uniquely Irish expression “a bheith idir dhá thine Bhealtaine.”  But our main interest here is vocabulary, including an tuiseal ginideach, not traidisiúin cheoil or feithideolaíocht or deasghnátha cosanta eallaigh.

So our key points to note are that:

(a) The ending of the word “Bealtaine” stays the same (“-ne”) whether we’re saying “May” or “of May” but it is interesting to note which expressions include the definite article (Mí na Bealtaine, the month of “the” May) and which do not (Lá Bealtaine, May Day).  There’s no absolutely clear-cut  pattern for these types of phrases, so some of them probably just have to be memorized.  Consider, for example “bláth bán na Bealtaine” and “lus Bealtaine“:

bláth bán na Bealtaine, hawthorn blossom, also known as “May” (the plant), lit. (the) white flower of “the” May, but …

lus Bealtaine mara OR simply lus Bealtaine, sea mayweed (Tripleurospermum maritima).  “Lus” usually means “herb” or “plant,” but not usually “weed” as such; “weed” is typically “fiaile,” and there are several other options as well.  Literally these two phrases break down to “plant of May of sea” (“weed” of May of sea, if you will) and “plant of May,” respectively.  The Latin binomial name, as we can see, has no reference to “May.”  One might think that a plant called “lus Bealtaine” would simply be “mayweed” in English without the maritime part, but apparently not — the names of the other types of mayweed plants are based either on “fíogadán” or “meá,” so … go figure.  “Lus Bealtaine,” apparently, is specifically a maritime plant, whether or not the word “mara” is included.

(b) “Bealtaine” may change to “Bhealtaine” depending on the context.  So we have “Lá Bealtaine” (day of May), but “dhá thine Bhealtaine” (two fires of May, two May Day fires) where “May” is used as an adjective describing “tine” (a fire), which is grammatically feminine.   Hence, lenition.

And now you can breathe a sigh of relief, because most of the grammar is done for this blogpost, at least most of the more complex grammar.  The remaining examples of May holidays and events should be more straightforward.

14 Mí na Bealtaine (sa bhliain 2017): Lá na Máithreacha.  Mother’s Day, lit. “(the) Day of the Mothers.”  True, the English punctuation indicates one mother (one symbolic mother of all, one presumes) but terms like this frequently turn out to be plural in Irish.  When we get to National Macaroon Day, we can be sure that more than one macaroon is implied by the English.  The form “máithreacha” is quite straightforward, if slightly irregular (máthair, mother; máithreacha, mothers).  “Happy Mother’s Day!” is “Lá na Máithreacha Sona!“, but this could literally be interpreted as “(the) Day of the Happy Mothers. ”  Of course, we could say the same thing for the English, which could mean, “(the) Day of the Happy Mother.”  Hopefully, the mother(s) is/are happy on Mother’s Day, so we hope it’s a moot point.

30 Mí na Bealtaine: Lá Náisiúnta na Súlap Miontais (i Meiriceá), National Mint Julep Day.  I’ve never seen “súlap” in Irish outside of the name of this drink, but then, I had never seen the word “julep” outside of the phrase “mint julep” until I looked it up and found phrases like “medicinal julap” [sic] and “a doze of julap” [sic].  The link for the nationaldaycalendar,com link for this is below.

“Súlap” (whenever that word entered Irish!) is a first-declension noun, so it stays the same when we say “a julep” or “of juleps.”

And finally, one last example, with an initial “m” in both English and Irish:

31 Mí na Bealtaine: Lá Náisiúnta na Macarún (i Meiriceá), National Macaroon Day.  Some day I’ll have to corner a Conamara cainteoir dúchais and find out if when they pronounce “macarón” (macaroni) it ends up sounding like “macarún,” given that in the Conamara dialect (canúint Chonamara), “nó” sounds like “nú” and “romhat” (/ro:t/) can sound like /ru:t/ and “seomra” like /s’u:mrә/.  In that case, it would be hard to distinguish a “National Macaroon Day” from a “National Macaroni Day.”  Unless we added the “cáis.”  Or looked at the féilire, since “National Macaroni Day” is in July.  That would presumably be “Lá Náisiúnta Macaróin” in Irish, with the genitive singular, since “macaroni” usually implies the final cooked product, with hundreds of individual pieces of pasta.  Macaroons, on the other hand, would tend to be eaten individually, so I’m thinking genitive plural here, with the “of the macaroons” construction in Irish (na macarún).  The link for the nationaldaycalendar,com links for these are below.

And on that tasty, commmfort food note, I hope you enjoyed this blogpost with the genitive case examples insinuated seamlessly into a hopefully fun discussion.  Hmm, food note, footnote?  I’ll have to get one of my cairde Gearmánacha to try pronouncing “food note” to contrast with “footnote” — can you tell I just recently listened to www.youtube.com/watch?v=0SOsaZiUCuk (SUPER EASY ENGLISH WORDS Germans Can’t Say)?  It deals a lot with specific pronunciation issues like that (“head” sounding like “het” and “bad” sounding like “bat.”  Ach sin an Ghearmáinis agus is ábhar do bhlag éile í.  Hope you enjoyed this and learned some “tuiseal ginideach” as well. – SGF — Roislín