Páirteanna an Bhogha: Irish Words for the Parts of a (Fiddle) Bow (Cuid/Pt.1) Posted by róislín on Apr 14, 2018 in Irish Language 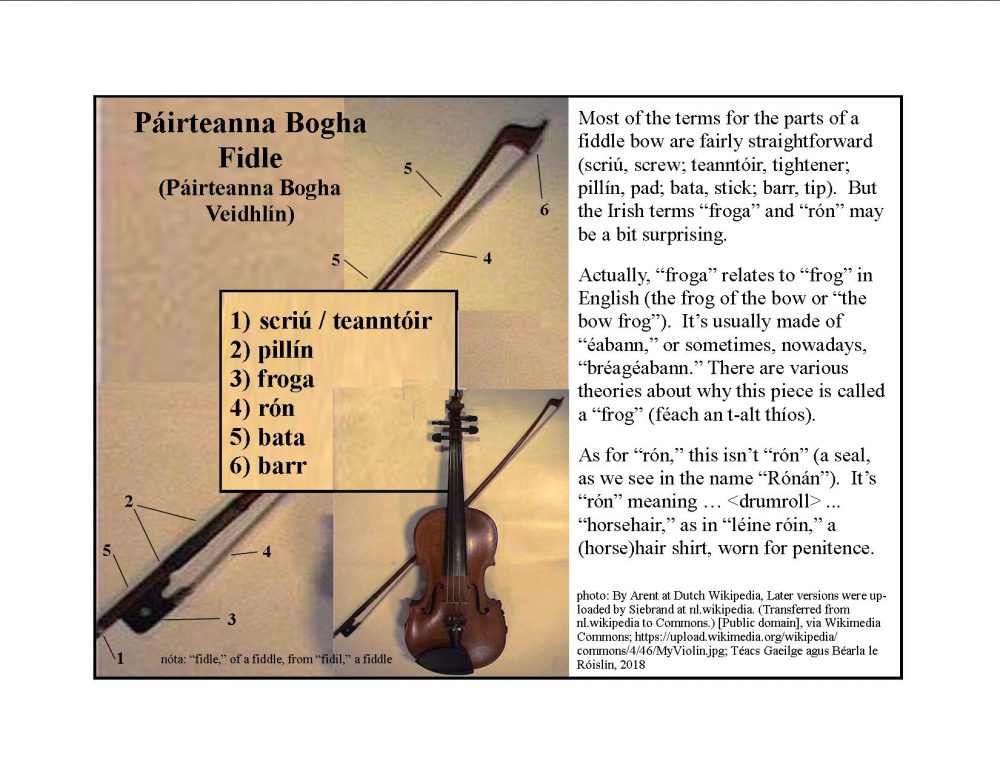 Most of the names for the parts of a fiddle bow are pretty straightforward, as the above graphic shows.  So let’s start with those, and then, in the next post, we’ll take up the curious case of the frog on the bow — what does it really mean and where does the word come from?   And, just as a reminder, today’s blogpost is a follow-up to the earlier piece on the parts of the fiddle (violin) itself (nasc thíos).

By the way, I know there could be even more detail here, like the “eye” and the “ferrule” of the bow, and at some point I plan to address those, but for right now we’ve got plenty of terms for one post.

a..scriú, which could also be referred to as a teanntóir (tightener)

b..pillín, pad or small cushion.  Actually, I haven’t been able confirm that this is the best word for the “pad” on a fiddle bow, but it seems a logical choice.  Some of the other words that mean “pad” are “pardóg” (more specifically a harness pad, and also a pannier), “ceap” (a pad, block or base), “dúchaire” (a stamping-pad, from “dúch,” ink) and “súiteán” (a blotting pad, from “súigh,” suck, absorb).  “Pillín” itself is also used in “pillín glún” (kneepad) and “pillín glantacháin” (a pad for cleaning).  A “pad of paper,” on the other hand, is  “bloc páipéir” or “ceap páipéir.”  If anyone has some other thoughts on “pillín” for a fiddle bow pad, please do let me know.

c..rón, horse-hair, traditionally used to string fiddle bows, although some are now strung with “ábhar comhchodach” (sintéiseach).  The word “rón” here may take some learners by surprise, because we probably learn “rón” for “a seal” (the animal), first, but like English (seal/seal, among others), Irish has plenty of homonyms.  “Rón” is also used in phrases like “tocht róin” (a horsehair mattress) and “léine róin,” a “hair shirt” or “horsehair shirt” or “haircloth shirt,” worn for the deliberate purpose of mortification of the flesh.  And what’s “mortification of the flesh” in Irish, you may well ask.   Well, one term is “moirtniú na colainne,” and Irish has at least two more terms for this practice (!) — but we don’t want to digress too much (do we?) so that will have to be ábhar blag eile.  Regarding “tochtanna róin” (horsehair mattresses), I was surprised to learn that horsehair mattresses are among the most expensive in the world.  I just saw some online descriptions for some for sale online at prices like $149,000 (ní botún é sin) and I saw just a “topper” made of horsehair going for “US $2599.00) (Naisc thíos)

d..bata, stick, can also be translated as “baton.” Some other words for “a stick” are “maide” and “cipín,” the latter also meaning “match” or “matchstick.” “Bata” and “maide” can sometimes be interchangeable, as in “bata siúil” and “maide siúil,” both meaning “walking-stick.”  De Bhaldraithe’s English-Irish Dictionary gives us “adhmad bogha,” for the “stick of a violin bow”, but this term sounds to me more like it’s talking about the material (adhmad, wood) rather than the part.  No hits online for clarification, other than the dictionary entry itself.  Barúlacha ag duine ar bith eile faoi sin?

e..barr, tip, also means “top,” “point,” and, as you might expect, is used in dozens of other expressions.

The Irish term “frog” will have to wait for the next post, but meanwhile, I hope you have a chance to listen to some good “fidléireacht,” without any “streancánacht” (scraping, as on a fiddle).  When you do, you might think of the musician’s investment in both the instrument and the bow.  High-quality bows can cost €3000 to €5000.  Is ábhar machnaimh é sin, nach ea?  SGF — Róislín

If you have further interest in reading in Irish about bows and a bowmaker, you might enjoy this “agallamh” with Noel Burke by Antaine Ó Faracháin:  http://www.beo.ie/alt-noel-burke-deantoir-boghanna-den-scoth.aspx

Ag Seinm Ceol Gaelach?  Irish Words for Musical Instruments and How to Use Them in Phrases (Pt./Cuid 1)Posted by róislín on Mar 22, 2018 in Irish Language

Ag Seinm Ceol Gaelach?  Irish Words for Musical Instruments and How to Use Them in Phrases (Pt./Cuid 2)Posted by róislín on Mar 25, 2018 in Irish Language

Eleven Pipers Piping, but not for Christmas per se, or, Ó Mhálta go Mars ag píobaireacht linn Posted by róislín on Mar 31, 2018 in Irish Language