Ag Seinm Ceol Gaelach?  Irish Words for Musical Instruments and How to Use Them in Phrases (Pt./Cuid 1) Posted by róislín on Mar 22, 2018 in Irish Language 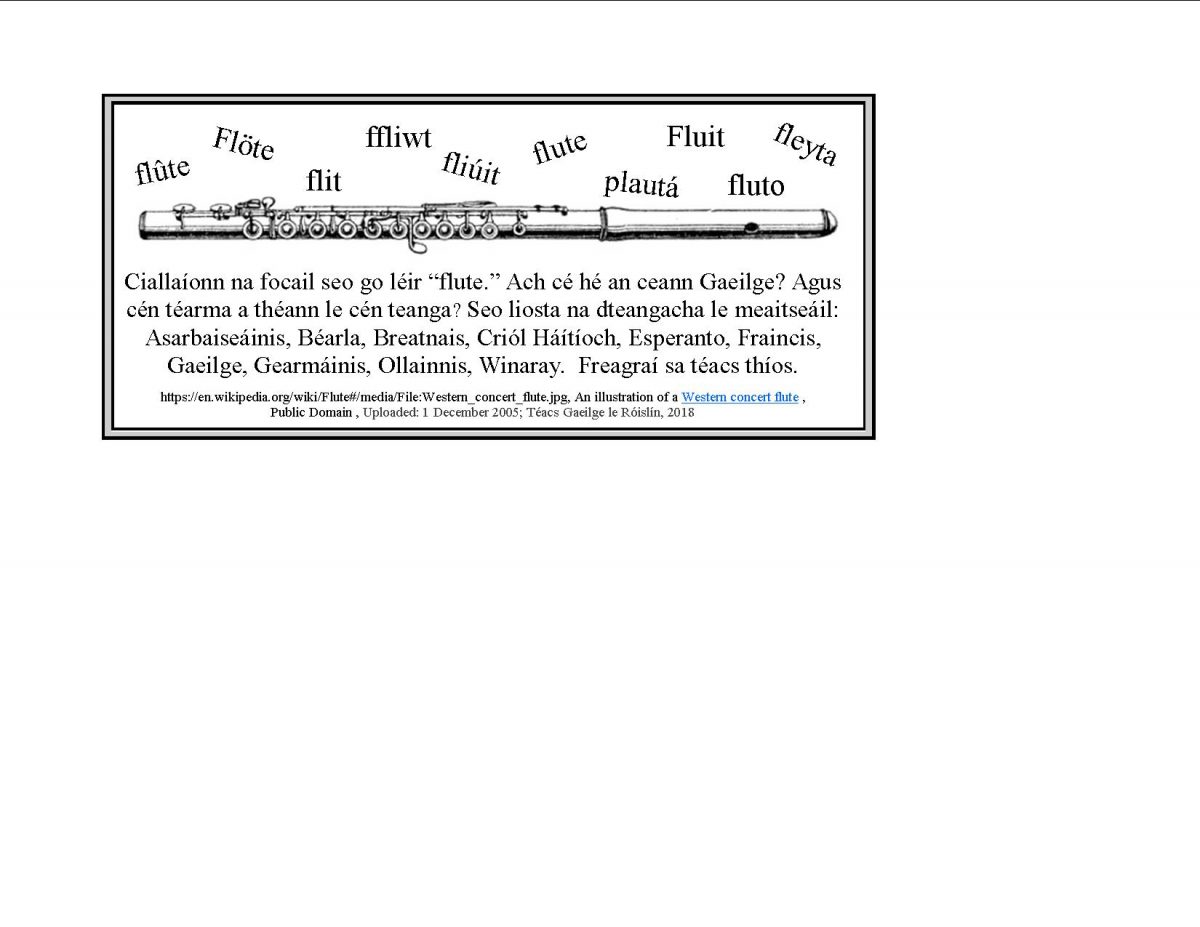 It’s always fun to talk about music (ceol) and I’m sure many readers on this list are musicians (ceoltóirí, singular: ceoltóir).  Some of the names of Irish instruments are quite recognizable from an English-language perspective, and, to some extent, other languages as well.  One good example is “fliúit” as seen in the graphic above (flute; Fraincis: flûte, Gearmáinis: Flöte, Breatnais: ffliwt; Ollainnis: Fluit, Criól Háítíoch: flit, Asarbaiseáinis: fleyta, Esperanto: fluto, and in some languages farther afield, like Winaray: plautá, although I’m sure cainteoirí Winaray must have their own indigenous word for a traditional instrument in their society, perhaps made of bamboo (bambú), of wood (adhmaid), or some other natural material … <pause for Googling> and indeed, there are locally-made bamboo flutes called tumpong and palendag, although I’m not sure if those are specifically Winaray words or if they are from one of the approximately 170 other languages spoken in na hOileáin Fhilipíneacha.

Up till now, I’ve never had any reason to discuss fliúit_ _ _ _ _ bambú (that’s a clue for the number of letters, if you didn’t already fill in the blanks) in Irish, but I did find one hit for the singular form of “bamboo flute” in an Irish Times article (i.e. in a real Irish-language context, which is what I always hope to find — not just dictionary listing or a machine translation).  The nasc for that is thíos.  And the article is well worth a look, since it must be by Gabriel Rosenstock, one of the leading Irish writers and translators of our time.  I say “must be” because I didn’t actually see his name attached to it.  Why would the Irish Times not include his name, I wonder?  Did it get lost in the digital shuffle from print to online?  Did I simply not see it?  Enh, I doubt it — I scoured the page.  An bhfuil mé dall?  And how do I know it must be Rosenstock?  It’s a bit complicated, so it’s in the nóta (1) thíos.

Back to flutes … as for the plural form, bamboo flutes, I found one hit in Irish, but it sounds to me like a machine-translated meascán mearaí, starting out, “Chun negate na héifeachtaí, … ” — enough to send me scurrying.  Three bells ringing wrong, wrong, wrong!  The details for that should probably go in a footnote, so nóta a dó, thíos.    The article could have been interesting, though, since it appeared to be an article in Irish about hanging bamboo flutes to improve feng shui.

And now, back to instruments popular for Irish music.  We’ll give the basic form, the form with “the”, and the plural, and then the phrases for saying, playing the (fiddle), playing the fiddles (ag seinm + (noun).  And yes, it could be “ag seinnt,” but I lean toward the most commonly taught forms of words for use in most of these blogposts.  Oh, and when I say “we,” I mean “we” — there’s lots of blanks to fill in, either single letters or word endings or initial mutations.  Freagraí thíos.

Since we started this post talking about flutes, let’s start the practice with “fliúit.”  And let’s go ahead and assume that the flute will be made of wood (“adhmaid,” of wood).  It’s the most widely used type in Irish music.   But let’s leave that extra word out for now, for simplicity’s sake.  “Simplicity?!” you say.  “Well, sort of simplicity,” I say, “at least it’s one less word to deal with, while going through the nominative and genitive forms, the singular and plural forms, and the two initial consonant mutations (lenition and eclipsis).”   Actually, “of wood” does stay the same throughout (adhmaid … adhmaid … adhmaid … adhmaid) but still, it might obscure the basic structures we’re trying to emphasize here.

This was originally going to be 10 entries, but don’t worry, if you don’t see “an uirlis cheoil a sheinneann tusa.”  This will be at least a two-part, maybe three- or four-part post.

And before we close,  I realize that some of these phrases for “play” can be expressed with “ar” (on), which would eliminate the need for the genitive case, although it might introduce even more lenition (mar a deir an seanfhocal, “Deartháir don sac an mála”).  For example, we could have “ag seinm ar fheadóg,” based on Tomás de Bhaldraithe’s example in his authoritative, if somewhat dated, English-Irish Dictionary (“seinnim ar fheadóg“).  However, he describes this as “poetic” usage and also defines it as “I pipe” (not “I play the whistle”), for what that’s worth.

And one further final note: Many of these phrases could also use other verbs for “play” in a musical sense such as “casadh” or “bualadh,” but I thought it would be simpler to stick to “seinm,” since its core meaning is “to play,” specifically referring to musical instruments.   The word “seinn” is probably a distant cousin of the Latin “sonare” (to sound), which gives us English words like resonant, dissonant, sonorous, sonata, and unison, not to mention “sound” itself.  The root “son-” also does double duty in “sonar” (SOund Navigation and Ranging), being one of the components of the acronym and the actual first syllable.  Most acronyms just use the very first letter of each element, but there are exceptions, sometimes to make the new word more memorable or easier to pronounce.  Here, the “o” was probably included because “*SNAR” as an acronym might not have seemed so effective or easy to remember.  Since we’re talking about sonar, what’s the Irish for it, and for radar (for good measure)?  “Sonar” is “sonóir” as in a dolphin’s “córas sonóra” and “radar” is basically “radar” but it can become “radair” to mean “of radar” as in “réalteolaíocht radair.”  And what exactly do those mean?  Freagraí thíos (B)!

Getting back to “casadh” and “bualadh” vs. “seinm” — they both have many other meanings not related to music, so again, that’s why I just stuck to “seinm.”  The additional meanings include the following:

Finally, some of you might remember that previously in this blog we looked at a great array of musical instruments from Alpchorn to xileafón (it’s very hard to find z-initial words within specific themes in Irish), but please remember that that was a very motley assortment of instruments, from all around the world.  That series (naisc thíos) was dedicated to finding as complete an alphabetical run as possible, and practicing the words both as subject and in saying “She is playing the ….”  This series will focus on instruments traditionally used for playing Irish music.  And of course, suggestions are welcome, so if you use didiridiúnna or hanghang in your Irish band, please let me know and I’ll include them.  There’s actually no Irish (yet?/ fad m’eolais) for a “hang” (pl: hanghang), but if I hear of one, I’ll let you know.  I doubt it’s really necessary.   It would be useful to have a gender designation for it, though — French, Portuguese, and Spanish chose masculine (le hang, o hang, el hang), and probably Irish would do the same.  In fact, there seems to be a trend for words borrowed into another language that has grammatical gender to be borrowed as masculine, especially when there’s no change at all to the spelling.  But that’s just a trend I’ve observed, not anything definitive.  Samplaí?  Eisceachtaí?  So that’s it for now, agus fan i dtiúin (semi-drochimeartas focal!) don chéad phost eile sa tsraith seo.  Slán go fa la la … úúps … fóill – Róislín

Nóta a hAon (1) agus nasc: https://www.irishtimes.com/culture/2.663/bain-na-slabhrai-seo-de-mo-chroi-1.1134936 , “Bain na slabhraí seo de mo chroí…“, 10 Márta, 2004.  I couldn’t find any author attribution online for this article (hmm?) but looking at the text, I assume it must be the renowned Gabriel Rosenstock, since there’s a reference to “mac liom, Tristan” as being “ball den ghrúpa traidisiúnta Téada.” Pé scéal é, is alt an-suimiúil é (mar atá gach rud a scríobhann Rosenstock!).  For any newcomers to Irish, I’ll translate those three bits of Irish:

Nóta a Dó (2): Why three warning bells for “chun negate na héifeachtaí…” ?  First, unnecessary use of English in an Irish text.  It’s not that I have any issue with English words dropped into Irish, everyone I know does, and so do I, but there should be a reason, and when writing, one can always use a dictionary, while in actual conversation, looking up words is  doable, with apps, but not as convenient.  For this context, there are at least three ways to say “negate” in Irish (cealaigh, cuir ar ceal, cuir ar neamhní).  Second, word order.  Third, if we were putting “negate” before the noun, the noun would go into the genitive case (ag cealú na n-éifeachtaí), which really means “negating the effects.”  Anyway …