‘Sona’ or ‘Shona’ for ‘Happy Christmas’ (Merry Christmas) in Irish? Posted by róislín on Dec 1, 2014 in Irish Language 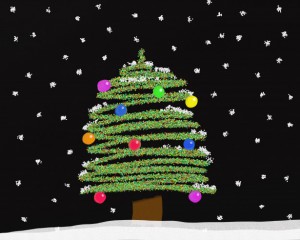 And right along with that, we have the greeting, “Nollaig Shona!”  [NOL-ig HUN-uh, with the “s” silent].

So let’s take a closer look at that adjective “sona” (with the “s” pronounced) see why it changes to “shona” for this phrase.

And some of you might be wondering why we use “shona” for Christmas but “sona” for “birthday” (as in “Lá breithe sona duit,” and I can just hear you all singing along to that, well, i mo shamhlaíocht).

It all boils down to … inscne (grammatical gender).

If you’ve been doing Irish for a while, you’ve already picked up the fact that almost all nouns in Irish have grammatical gender.  There are about 20 that don’t (my rough count, anyway), ach sin scéal eile.  If you haven’t got the basic skinny on inscne, you might want to check out Transparent Language’s video on YouTube first (Irish Gaelic Grammar: Gender, https://www.youtube.com/watch?v=5Vt6p1wF5xw)

So we know that Irish nouns are either masculine or feminine (except for a few further exceptions, that switch gender from dialect to dialect).  “Table” (bord) is masculine but “chair” (cathaoir) is feminine, and that list goes on and on.  Sometimes it seems logical (an fear, the man, masculine, and an bhean, the woman, feminine).  Other times it’s less logical, at least from today’s perspective (an cailín, the girl, masculine, but an stail, the stallion, feminine).

At any rate, our topic today is holidays, specifically Christmas, so we’re mostly concerned with the word “Nollaig” (An Nollaig, Christmas).

“An Nollaig” is feminine, so when we use an adjective to describe it, like “happy,” we have to use the feminine form of the adjective “happy.”  For current purposes, that will be “shona” [HUN-uh, silent s].

The fact that we drop the “an” part off of the greeting doesn’t change what we do with adjective in the greeting:

If you’ve already learned to sing “Lá breithe sona duit,” just remember that we use “sona” there because “lá” is masculine, and “sona” agrees with “lá.”

It’s interesting that a number of Irish words for major holidays are also feminine (An Cháisc, Easter, mar shampla).  So we might think “shona” would also apply.  But for Easter, the typical “happy” greeting isn’t with any form of “sona.”  Instead, people typically say “Beannachtaí na Cásca ort” (lit. the blessings of Easter on you).  So we don’t have the “sona”/”shona” issue there.  But if you wanted to literally say, “Happy Easter,” you’d use “shona.”

Thanksgiving greetings are probably fairly scarce in Irish, since it’s not an Irish holiday, but if you were going to say “Happy Thanksgiving,” the word “sona” would match up with “lá,” which is masculine.  Lá Altaithe Sona!  And certainly among the Irish-speaking community in the U.S. or Canada, this would be a reasonably typical thing to say.

“Happy Halloween,” again not a particularly traditional phrase in Irish, would be “Oíche Shamhna Shona!” because “oíche” is feminine.  As it happens, “Samhain,” which changes to “Shamhna” here, is also feminine, but that’s not what governs the phrase here.

For some further discussion on “happy” vs. “merry,” you might want to check out a previous blog in this series: Happy vs. Merry and All That! (Sona, Meidhreach, srl.) Posted on 12. Dec, 2010 by róislín in Irish Language  (https://blogs.transparent.com/irish/happy-vs-merry-and-all-that-sona-meidhreach-srl/)

For a little more on “Giving Tuesday” in Ireland, you might want to check out their website (http://givingtuesday.ie/).  But I don’t see any actual Irish language there.  In the phrase above, Máirt na Carthanachta, I patterned the phrase for “Giving” on “Seachtain Náisiúnta Carthanachta” (National Giving Week), from “carthanacht” ([KAHR-hun-ukht, first “t” silent], love, charity, friendliness, friendship).  “Máirt na Tabhartha”  [… TOW-ur-huh] and “Máirt an Tabhartais” of course, would be other possibilities.  So far, I don’t see any of these phrase for “Giving Tuesday” in Irish online.

Meanwhile, an bhfuil siopadóireacht Nollag le déanamh agat?  In an upcoming blog, we’ll decide whether to go “-ig,” “-ag,” or “-igí” when talking about Christmas.   Hopefully that will prove to be a POPular topic.  Sorry, James Newell, couldn’t resist — there are so many examples of “-igí” (and “-ígí“) in Irish, I knew an Iggy Pop reference would come up sooner or later.  Slán go fóill — Róislín