Italian Transitive And Intransitive Verbs Posted by Geoff on Jun 30, 2017 in Grammar 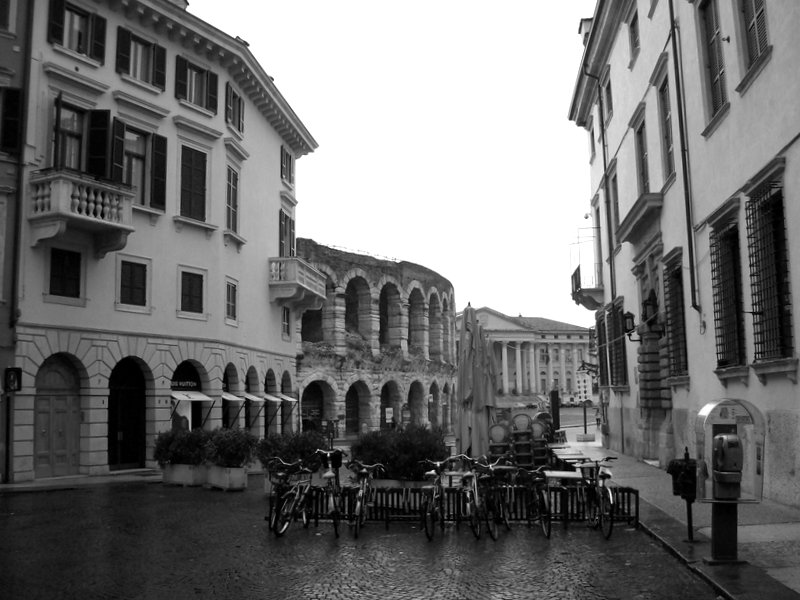 Siamo rimasti a Verona per due giorni. Photo by Geoff.

What are Transitive and Intransitive verbs?

Transitive:
The word transitive comes from the Latin transire meaning ‘to pass’, ‘to cross’, ‘to go beyond’, therefore it describes actions that move from the subject or doer directly to the object, without making use of prepositions such as di, da, per, a etc.
Examples:
The classic example that we learn at school is: io mangio la mela (I eat the apple); in this sentence io is the subject of the verb, mangio is the transitive verb, and la mela is the direct object.
It’s not always necessary to express the direct object, for example: la sera mangio presto (in the evening I eat early). Here, the direct object would be ‘dinner’, ‘meal’, or ‘food’, but it is implicit rather than expressed.
Another example would be: Giovanni guida la macchina per andare a lavorare (Giovanni drives his car to go to work). Here, guidare is a transitive verb because it is followed by the direct object, la macchina. However I could also omit ‘la macchina’ and simply say Giovanni guida per andare a lavorare.

Intransitive:
When using intransitive verbs, the action does not move directly from the subject to the object but makes use of a preposition such as di, da, in, a etc.
Some important intransitive verbs are those which don’t express an action but rather a state or a condition, such as essere (to be), stare (to stay), divenire (to become), or movement such as andare (to go), venire (to come), arrivare (to arrive), etc. When using these verbs we frequently add information, such as ‘where’, ‘when’, ‘how’, ‘for how long’, and so on.
Examples:
il treno è arrivato in stazione (the train arrived at the station). Here, il treno is the subject, è arrivato is the intransitive verb, in stazione is the indirect object introduced by the preposition in
sto in ufficio tutto il pomeriggio (I’ll be in the office all afternoon)
Giovanni va al lavoro in macchina (Giovanni goes to work by car)

A common cause of confusion is that verbs which are transitive in Italian are sometimes intransitive in English and vice versa.
Take the transitive verb ascoltare (to listen) for example: in Italian we say ascoltare una canzone (literally: to listen a song, without the proposition ‘to’). In English, however, we say ‘to listen to a song’, making the verb ‘to listen’ intransitive.
A good bilingual dictionary should help you to identify whether verbs are transitive or intransitive. When looking up a verb in your dictionary you should find that it is followed by either vt (also v.tr) which is short for verbo transitivo, or vi (also v.intr) short for verbo intransitivo.

The Importance of Understanding the Difference between Transitive and Intransitive

Knowing the difference between transitive and intransitive verbs will help you to understand which auxiliary verb to use in the past tense: essere or avere?

For all other intransitive verbs you’ll need to use your dictionary as there’s no fixed rule.