On Thursday the 21st of March Pietro Mennea, the Olympic sprint champion who held the world record for the 200 meters for 17 years, died in Rome at the age of 60 after an 8 months battle against an incurable disease. Mennea was born on the 28th of June 1952 in Barletta, in the south-eastern region of Puglia on the Adriatic sea, and was popularly known as la Freccia del Sud (the Arrow of the South).

On Sept. 12, 1979, Mennea, competing  alle Universiadi (in the World University Games) held in Mexico City, set the 200 meters world record of 19.72 seconds, breaking U.S. sprinter Tommie Smith’s record of 19.83 which was set on the same track at the 1968 Olympics. Mennea’s record stood until 1996, when Michael Johnson achieved 19.66 seconds at the U.S. Olympic trials. Johnson lowered the mark to 19.32 at the Atlanta Olympics later that year. Usain Bolt of Jamaica holds the current 200 meter record of 19.19 seconds, set in 2009. However, to this day Mennea’s 19.72 seconds still stands as the European record. 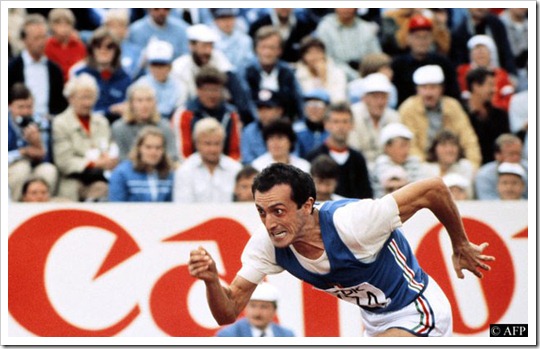 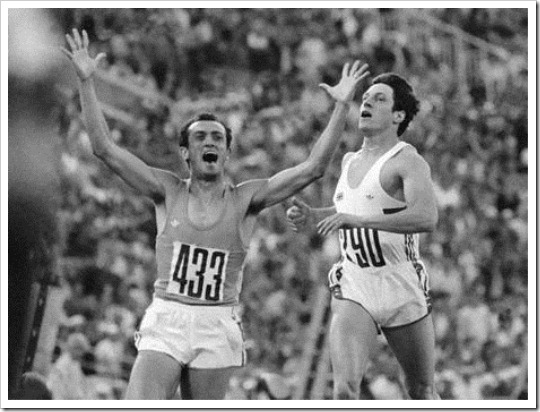 Above: Video from Moscow Olympics 1980

His international career stretched from 1969 to 1988 and he competed in five Olympic Games, his first victory being a 200m bronze medal in Munich in 1972 when he came in third behind the great Soviet Valeriy Borzov and Larry Black of the US. At a time when athletics was dominated by Eastern European and Black American athletes, Mennea represented the pride and the dream of us Italians. His myth never faded with time, and it says a lot that his body was lain in state at the CONI (Italian Olympic Committee) headquarters in Rome, the first athlete to receive such an honour in the history of CONI. On Saturday the 23rd of March he was given a state funeral at the Basilica of Santa Maria Maggiore in Rome.

Le Ferrovie dello Stato (The Italian Railways) have announced that they will name the first Frecciarossa 1000 (Red Arrow 1000, the fastest train ever produced in Italy) ‘Pietro Mennea’ in his honour: “Per commemorare una Freccia del Sud che ha dato lustro all’Italia” (To commemorate an Arrow of the South who brought prestige to Italy).

Amongst the many eulogies to Mennea here are two written by famous Italian footballers which perfectly illustrate  what Mennea represented to us children growing up in those days:

Francesco Totti, the captain of the Roma Football Club, wrote on his official Facebook site:  "Quando ero bambino, e poi anche da ragazzo, tra noi amici a quello che correva più forte si chiedeva sempre: ‘Ma chi sei, Mennea?’ perché a quei tempi per noi Mennea rappresentava il mito della velocità. Lui è stato il nostro orgoglio, ha affrontato i più grandi corridori e li ha battuti. Ciao Pietro, ciao campione". (When we were children, and then later on as teenagers, amongst friends we used to ask the fastest runner: ‘Who are you, Mennea?’ because at that time Mennea represented to us the myth of speed. He was our pride, he challenged the greatest runners and beat them. Goodbye Pietro, goodbye champion”)

On a similar note, his colleague Alessandro Del Piero on his official Twitter page wrote: "Quante volte da piccoli abbiamo detto: ‘Corro veloce come Mennea?’ Addio a un grande campione". (“How many times when we were children did we ask: ‘Am I running as fast as Mennea?’ Farewell to a great champion”). 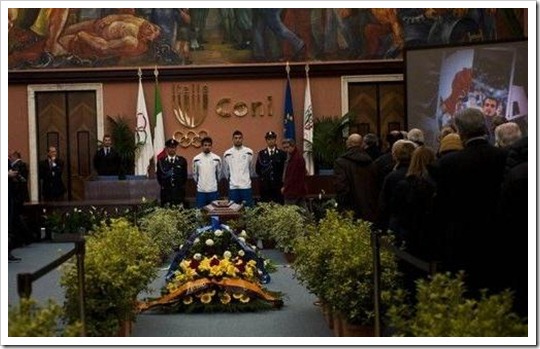 Above: Mennea’s body lying in state at the CONI HQ in Rome.