10 Facts about Ancient Rome that You Didn’t Know Posted by Brittany Britanniae on Sep 18, 2014 in Roman culture

I hope everyone’s week is going well. My week is going okay other than the horrible heat wave in California. So for your viewing and intellectual pleasure. I will present to you 10 Facts about Ancient Rome that will make you think, giggle, and ponder the world of antiquity.

1.The early Romans thought Christians were literally practicing cannibalism when they heard that they consumed bread and wine as symbolic representations of the body and blood of Christ. 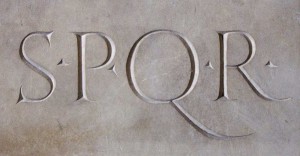 2. The abbreviation SPQR can be found on many Roman statues, buildings, and military sta.ndards. It stands for “senatus populusque romanus.” meaning “The senate and people of Rome.”

3. The Romans had gods for doors (Forculus), hinges (Cardea), and thresholds (Limentinus).

4. In response to a 73 B.C. revolt against Rome by Spartacus the gladiator, 6,000 slaves were crucified. 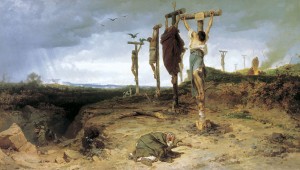 Crassus crucified 6,000 of Spartacus’s followers on the road between Rome and Capua. Courtesy of WikiCommons.

5. Sometimes gladiator blood was recommended by Roman physicians as an aid to fertility

6. Some men were advised to use hippopotamus skin to make hair grow. Men and women would remove hair with bat’s blood or hedgehog ashes, or keep hair from turning gray by coloring their hair with oil mixed with earthworm ashes

7. The Romans sometimes trained some female slaves to fight as gladiators.

8. In battle, Romans sometimes grouped together and held their shields all around them in a formation called “the tortoise.

9. The Romans divided their days into 12 hours, measured by a sundial.

10. The Vestal Virgins were female priests who tended the sacred fire of Vesta, goddess of the hearth fire. If they lost their virginity, even as a result of rape, they were buried alive in an unmarked grave. In the 1,000-year history of the temple, only about 18 Vestals received this punishment (recorded).