Salvete Omnes! I hope it has been a pleasant weekend. Well, 2045 years ago it was a very busy weekend for the ancient Romans! 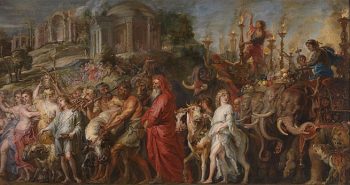 As of this year, it has been 2,045 years since Imperātor Caesar Dīvī Fīlius Augustus, or Gaius Octavian, as he was known at the time, held 3 consecutive triumphs on August 13th, 14th, and 15th. Its a nice extra detail that this month, thousands of years later, still commemorates Augustus and his rule as the first Emperor of the Roman Empire.

But what exactly is a “triumph”? Or rather, a “triumphus”?

A triumph was a civil ceremony and religious rite held to publicly celebrate and sanctify the success of a military commander who led Roman forces to victory. 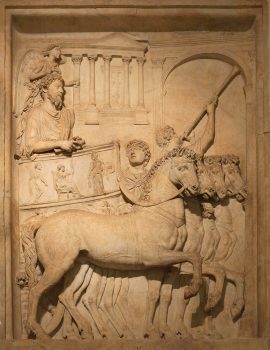 It was an incredibly elaborate and extravagant affair. Citizens could hardly have seen anything more spectacular!

The general, the vir triumphalis (“man of triumph”), who was being honored would don a toga picta (“painted toga”), which was dyed a solid, rich purple and was embroidered in gold that identified his elevated and heroic status.

Contemporary Toga picta in a wall painting from the François Tomb at Vulci. Courtesy of Wikimedia Commons.

He would traditionally wear a crown of laurel and would ride a four-horse chariot, sometimes with a face painted crimson like Jupiter Capitolinus. He would lead a pompa (“procession”) of his army, who would have been chanting and singing “io triumphe!” and such. Following behind his army were his captives, and the loot he gathered from war. At the end, he would offer a sacrifice at Jupiter’s temple on Capitoline Hill. 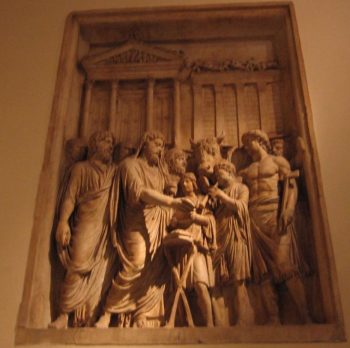 Emperor Marcus Aurelius (161-180 AD) and members of the Imperial family offer sacrifice in gratitude for success against Germanic tribes. In the backgrounds stands the Temple of Jupiter on the Capitolium (this is the only extant portrayal of this Roman temple). Bas-relief from the Arch of Marcus Aurelius, Rome, now in the Capitoline Museum in Rome. Courtesy of Wikimedia Commons.

Most of what we know of triumphs comes from the source called the Fasti Triumphales (or also known as Acta Triumphalia). Fasti is the plural of fastus, which is commonly used as a substantive. Fastus is derived from fas, which meant “that which is permitted,” or “that which is legitimate in the eyes of the gods.” 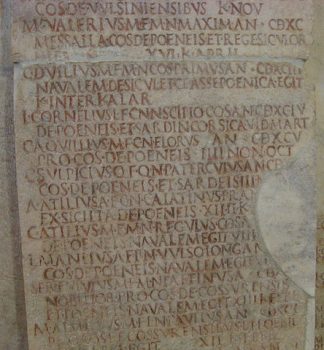 Segment XX of the Fasti triumphales, a portion recording triumphs during the First Punic War By Rossignol Benoît – Own work, CC BY-SA 3.0, https://commons.wikimedia.org/w/index.php?curid=17155354

The fasti triumpahles was a list of the triumphs, listing these days that had been seen as religiously legitimate. They are a collection of stone tablets that were erected in the Forum Romanum around 12 BCE, during the reign of Emperor Augustus. They give the general’s formal name, his father’s name, the details of the place and date of the procession. There were over 200 recorded before the record stops. Evidently, triumphs were a very big deal for the Ancient Romans.

So, let’s look back at what this towering figure of history was doing at this time only 2 years before the beginning of his reign.

Octavian must have had a flare for spectacle (or was it ambition) because these triumphs were quite extravagant and somewhat nontraditional.

According to Jochen Bleiken in “Augustus: The Biography”:

“The last procession in particular outdid anything ever seen before. Setting out from the Campus Martius (“Field of Mars”), it traversed the Flaminian Road and the Circus Maximus and then passed through the triumphal arch of the Servian Wall, which lay between the Capitol and the Tiber. It now entered the city, went on eastward around the Palantine to the Via Sacra, and so reached the entrance of the Capitol, which the triumphator ascended in order to dedicate his laurel wreath to the principal god of the city, Jupiter Optimus Maximus.” 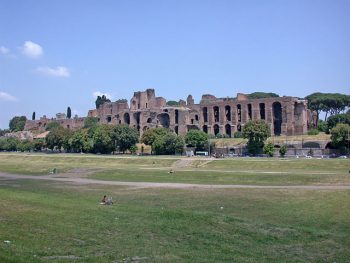 Today’s view of the Circus Maximus and the palace on Palantine. Courtesy of Wikimedia Commons.

However, Octavian did some things differently:

This is all pretty impressive, especially given that Octavian had been battling a terrible cold and sore throat the same week! (Though, during his illness he had the luxury of having Virgil read his poetry, the Georgics, to him over several days.)

Of course, a cold would not have stopped the Augustus we know from history from the three days of continual procession and celebration of his deeds.